Our state bird is an eye-catching example of nature’s wondrous pigmentations. 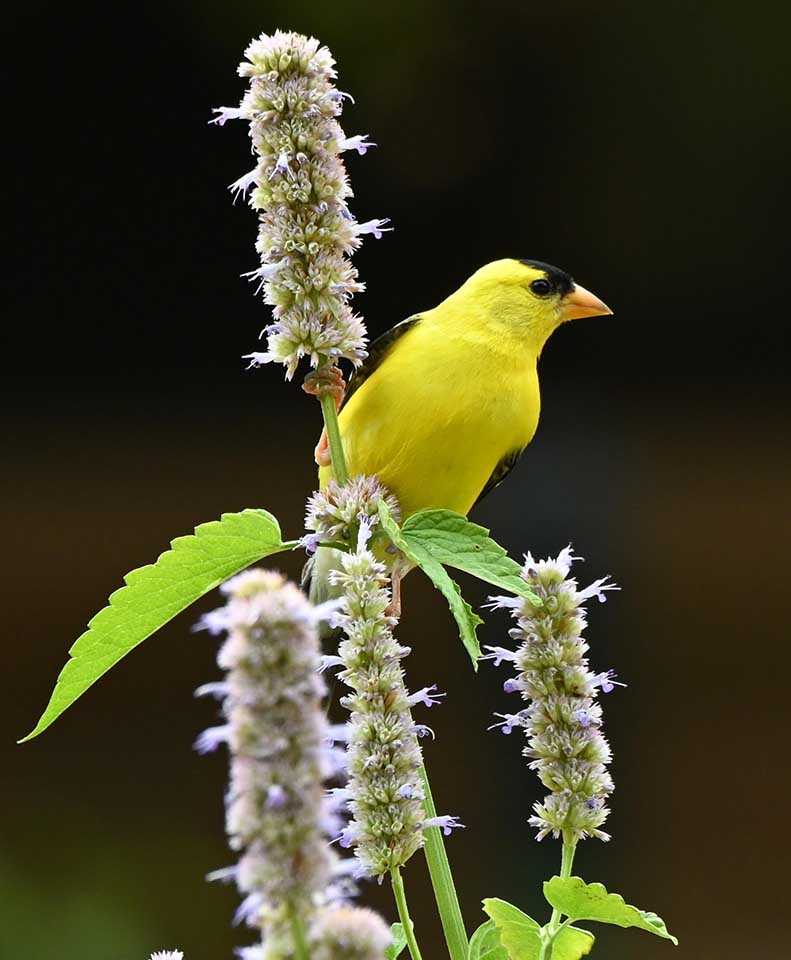 The beauty of the American goldfinch’s brilliant yellow plumage did not escape one of our most famed New Jersey artists, Edward Marshall Boehm (1913-1969). He memorialized his image of a flight of goldfinches in a porcelain sculpture that is displayed in the legislative wing of our State House in Trenton, named the “Glory of New Jersey.” Protected under glass, the assemblage includes male and female goldfinches, violets, and honeybees, along with the branches of a red oak.

There is no hyperbole when I describe Boehm’s (pronounced Beam) renown as an artist. In fact I may have understated it. He began his porcelain business in Trenton in 1950 and one year later the Metropolitan Museum of Art, NYC ordered two of his sculptures for its collection. His primary subject was birds.

Today most of the world’s major museums own Boehm’s work, from Buckingham Palace, to the Hermitage, the White House, Elysée Palace, and the Smithsonian, among many others. In fact in 1992 the Vatican Museum named one of its 13 branches after Boehm. In its 500-year history he is the only American citizen to be celebrated as such, the other 12 galleries being named for royal families and popes.

Boehm’s birds were also the first to be formed of a porcelain comparable to that of European and Asian artworks. Hard-paste porcelain is a high-quality material made with mixtures of kaolin, feldspar, and quartz. At one point Trenton was the national center of this craft.

The fondness for Boehm’s works speaks not only to his artistic abilities but to people’s fascination with birds and their splendor. So how does the male goldfinch achieve its dazzle? Let’s begin with an elementary discussion of how the colors of birds’ feathers are achieved.

Their pigments and structure determine their perceived coloration. Pigment is broken into two color groups: carotenoids that contribute to the red and yellow hues, and melanins to create the blacks/grays and browns/buffs. Carotenoids are derived from a bird’s diet; in the case of goldfinch they primarily come from seeds. Melanins are synthesized within the melanocyte cells of a bird’s body and work with feather follicles to produce color. Ornithologist David Sibley describes the process of a feather emerging from a shaft as similar to the production of an ink jet printer page.

In addition to pigmentation, structure contributes to the appearance of a bird. The goldfinch has a very interesting pattern on its yellow feathers that provides an extra brilliance. Each body feather is white with the tip dipped in yellow. In its plumage the yellow overlaps the white. Since a single feather is very thin, the white reflects light back through the yellow, giving it added reflectivity. Think of it like this: If an artist put a thin coat of yellow over black it would look much different than if placed over a coat of white, resulting in a much brighter yellow.

Colors are also about contrast. Picture a red-winged blackbird, whose red epaulettes pop because they are surrounded by black. Similarly the male goldfinch’s black wings framed by the brilliant yellow of its back and belly make the adjacent yellow more explosive.

So why are most male birds so much more colorful than their female counterparts? In Carl Safina’s new book Becoming Wild, he cites the importance of beauty. Especially male birds have evolved to be attractive, and male goldfinches are particularly flashy after molting in the spring. In the bird world mates are generally chosen by females; they are very picky and looks count. During breeding season males are spectacular while females are more drab with greenish tones to their yellow; during the incubation of eggs the duller plumage keeps the female in her nest less noticeable.

When breeding season is over in late summer the males and females molt (change their feathers). The American Goldfinch is the only finch that does so twice a year. The male’s winter plumage is much duller than his dating garb and it sports an additional undercoat of feathers that provide insulation in the winter.

Generally finches have one brood, rarely two. Their clutch consists of two to seven eggs that are incubated for about two weeks. In 11 to 17 days the young will fledge but they have some reliance on their parents for six weeks. Once the young hatch the males take on more of the feeding responsibility. These birds are usually monogamous, but if a female has a second brood it is often with a different male.

You may have heard of cowbirds, well-known for their predatory nesting strategy. They lay their eggs in other birds’ nests, often those of smaller birds, seeking surrogate parents. The oversized hatchling outcompetes the original brood’s chicks, leaving the cowbird victorious at the expense of the surrogate parents’ young. However, the cowbird who tries its homewrecking tactics in a goldfinch’s nest is foiled. A cowbird chick can’t be sustained by a goldfinch diet of seeds alone, so after a few days it perishes.

The mating season of the American goldfinch is much later than most North American species. They fashion tightly-woven cup-shaped nests in June and early July, so closely built that they are often able to hold water. Later nesting gives them greater access to plants, which is important for both themselves and their young. Most songbirds rely on caterpillars vs. seed for their young because of digestibility; goldfinches feed their chicks a regurgitated seed mash so that the nourishment can be more easily assimilated. Strictly vegetarians, goldfinches eat an occasional insect only through error. Their preference is to feed on seed heads above the ground, so leaving these on plants standing over the winter is important. Providing natives is the best option.

We plant anise hyssop, coneflowers, asters, sunflowers, and rudbeckia. A non-native annual that they are crazy for is the Texas salvia; red, salmon, or white, it doesn’t seem to make any difference. They also like tithonia/Mexican sunflowers. The stiff stems of these blooms support their half-ounce of weight, although occasionally you will see one take an elevator ride downward as it feeds.

Finches will eat new bark from young twigs, fresh treebuds, and maple sap. Red cedar, elm, and alders provide nourishment as well. If you use winter feeders, nyjer and sunflower are favored.

Our property this time of year is loaded with flashes of yellow and a jumble of high very clear notes. Often birders use the mnemonic ‘po-ta-to-chip’ to describe their voice. Others have suggested rapidly repeated ‘toWEE toWEE toWee tweer tweer tweer ti ti ti.’ I only occasionally make out the ‘po-ta-to-chip,’ but a jumble of cheerful musical chortles resonates with me.

Here in New Jersey and throughout most of the United States they are year-round residents. The states along the U.S. southern border have only wintering goldfinches. They can breed as far north as Quebec, Saskatchewan, and southwest Newfoundland. Birds that nest in Canada migrate south.

New Jersey is not the only state that has selected this beauty as its official bird; Iowa and Washington have done so as well. In Washington they often call it the willow goldfinch, while Iowa and New Jersey call it the eastern goldfinch. These are all the same species—the American goldfinch or Carduelis tristis. A collective or flock of goldfinches is known by a number of nouns, “007,” “charm”, “rush”, “treasury”, or “vein.” The latter three are obviously references to “gold.” I like “rush” because as I exit my house they flush swiftly from the garden in a cloud of yellow. I can only imagine that Edward M. Boehm was equally charmed as he created his sculpture, filling it with perched gold. n

What It’s Like to Be A Bird, by David Sibley