It’s almost time for black drum to be drumming in the Bay, and for anglers to listen, catch and enjoy. 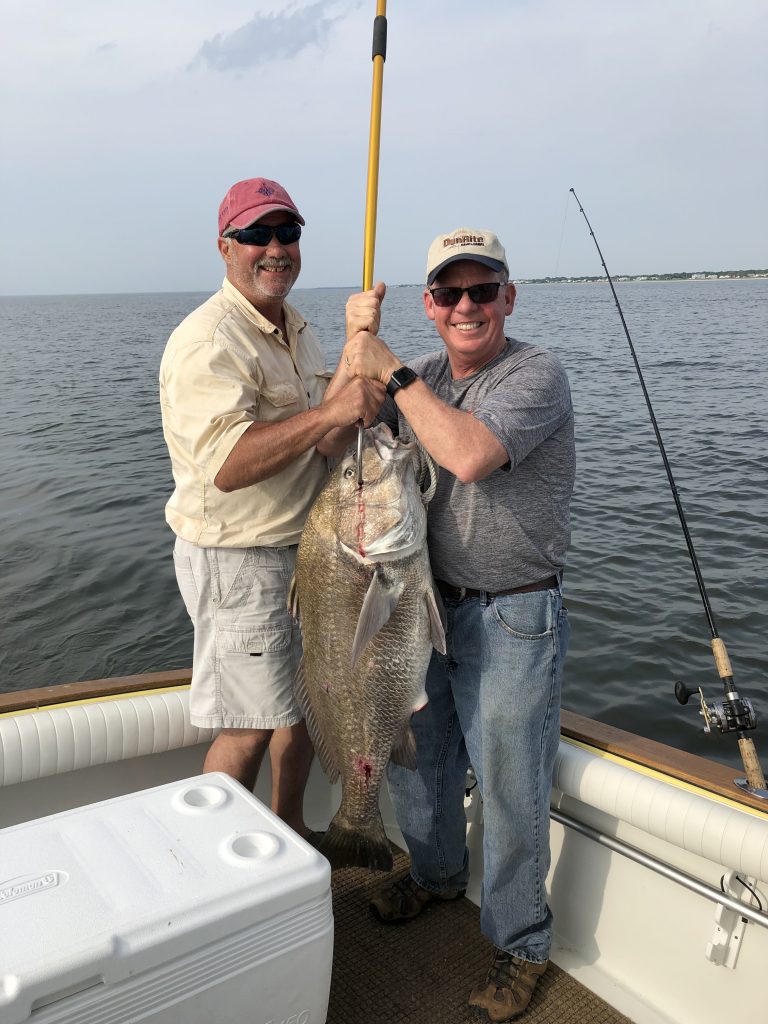 As I drive the Bayshore Heritage Byway I have noticed an oddity of sorts in Goshen: An angler has been hanging fish carcasses from a telephone pole’s support cable, the “guy-wire” that attaches to the ground to give further stability to the pole. I see these fish hanging along Route 47 each May, when I go to Reed’s Beach to help host the International Shorebird Recovery Team. These aren’t just any fish but big black drum fish.

The mystery to me had been why the fish appeared to be whole, until two years ago when I witnessed the way many of our local anglers approach filleting a black drum, or Pogonias cromis. The fish is not scaled but rather cut along the dorsal fin and the fillet is carved out, leaving the remainder with an intact appearance and an un-incised belly.

Conversely, years ago when I saw a fisherman scale a drum fish at Longreach Marina along the Maurice River, he prepared his catch by scaling and filleting, leaving the skin on the drum. He gave me some scales for use as guitar picks. Ultimately, the carved-out approach made more sense to me because the fish’s skin is very leathery and can be sliced open without piercing it. Additionally the scales are like large armor plating.

Hanging these fish from the pole’s support is a bit of proclamation, I assume: “The drum are running in Delaware Bay and here’s my catch.” A number of fishermen say that when the dogwoods bloom the drum are running in the Bay. I suppose people wouldn’t get the same message if a blooming dogwood branch was hung up there. However I’m assured that mid-May until the end of June is the better time to wet the line because the drum are more abundant. Water temperature plays a role; mid-60s is ideal. When temperature advances to 70 degrees the adult fish leave the bay.

One of my friends who has fished in our area for more than 40 years says that many different species have run in the Delaware Bay and then subsequently been depleted for one reason or another, but that the black drum have been present consistently. He believes that it is to some extent because they have never really been part of a commercial fishery.

We do get red drum in the Delaware but they remain a rare catch, more commonly found in waters south of here. Recently a number of species that have traditionally been caught in waters south of here, in Chesapeake Bay, are showing up farther north. Sheepshead and spade fish have been found, and even a pompano was caught off of Fortescue in 2020. Some fish may be bypassing us as they head to more northern areas. These increasing occurrences are attributed by many to global warming.

The black drum belongs to a cohort of fish called Sciaenidae, with about 275 species. They are characterized by their ability to make a rhythmic sound. Some well-known species from this family in the Delaware Bay area include Atlantic croaker, spot, yellow perch, silver perch, and weakfish. Black drums were given their name because they make deep drumming noises.

According to the Animal Diversity website, “Females only respond [to the sound] on certain nights when their ovaries are filled with eggs. When the female does acknowledge the male’s presence the two engage in what is known as a mating chase. During the chase the males bump the sides of the female causing her to release her eggs…” Then the male discharges a cloud of sperm over the eggs to fertilize them.

Drum fish spawn at the mouth of Delaware Bay and then move farther up-bay to feed. Hatching within 24 hours, the young will drift up the estuary and be found in the tributaries of the Delaware. In a few weeks they will have a similar shape to their adult counterparts. By two years old they will weigh about three pounds. Those fish weighing eight pounds or less are called puppy drums. By four years they are mature and can be as long as 30 inches (J. Zimmerman, DE Div. of Fish and Wildlife). There are varying accounts of their growth rate but clearly up until age 15 the growth is very rapid, with the fish achieving lengths of 42 inches and then leveling off. Their lifespan is 40 to 50 years. Most catches are around 40 pounds; as of February 17, 2021, the NJ State record remained a 109-pound drum caught in 2008 in Delaware Bay.

The young drum has four or five silver and black vertical bands. As it matures the body is generally silvery-gray with a brassy sheen. The face is blunt with a mouth that is placed low on its chin for bottom-feeding. Its fins are black in appearance. Some sources describe their teeth as cobblestone-like for crushing prey. The fish has 12 or 13 sensory barbels, whisker-like appendages, that help it sense food. In fact the first part of their scientific name, pogonias, means “bearded,” while cromis means “to croak.”

These bottom feeders crush mollusks and crustaceans such as oysters, clams, and crabs in their strong jaws. They can literally crush hard shells open, not a good place for your fingers!

So how do they create the drumming noises? The sound is produced by sonic muscle fibers—vibrating bands that run horizontally along the body and are amplified by the swim bladder. I thought it would be fun to have some of my musically inclined birdwatching friends listen to a recording of a black drum calling and ask what they thought they were hearing. These are some of the responses: An American bittern’s pumping call during breeding season. A heavy gauge slack string on an electric guitar being plucked. A bullfrog calling underwater (frogs don’t call underwater). A muffled heartbeat in a large metal drum. A deep timpani kettle drum. Everyone agreed they sound like a gulp or a glug with a submerged metallic resonating quality.

By the way, weakfish purr a bit like a muffled pileated woodpecker hammering underwater. In fact, maybe I could get my birding pals to come up with bird sounds that are similar to many fish voices.

Last year I was fortunate enough to be invited on a fishing trip at the end of May. We departed through the Cape May Canal and then moved up Bay. About a mile offshore of the Highlands and Villas we baited our lines with surf clams. Our craft drifted parallel to the Cape May Peninsula’s shorebird beaches in a fleet of other recreational boats. This stretch of beachfront is suitably dubbed “Shorebird Alley” in the Bayshore Heritage Scenic Byway Management Plan. After spending more than 30 years observing shorebirds from the mainland it was nice to have a new vantage point. Since it was May 29, the vast majority of the shorebirds had already departed for their Arctic nesting ground so the beaches were almost bare of birdlife. As we waited for a strike, at times we could hear the black drums making their rhythmic calls beneath the boat. Although some folks think they only drum at night that may be because in the calm of evening they are easier to hear. Also, people have traditionally fished for them after dark but they can be caught day or evening.

Our trip was in the afternoon, and while I didn’t catch the king of the Bay my arms sure felt like I had. Snagging a drum is like tugging on a rope connected to a tree. It just seems immovable. The expert anglers on board shared techniques to help raise the fish but warned me that as soon as it caught sight of the boat or the person at the other end of the line it would likely offer greater resistance. Without the help of my comrades the fish would never have been landed!

In the days that followed I cooked drum fish for staff lunches. One of my friends compares the taste to veal; his wife prepares it like veal parmesan. I would like to think our meal reminded everyone of the reasons why we fight for clean water and for regulations that protect species from over-harvest. Please note that our Maurice River is the largest source of clean fresh water to the Delaware Bay after the Delaware River itself!

The black drum ranges as far north as the Gulf of Maine and follows the coastline south to Florida, wrapping around the Gulf of Mexico and extending to Argentina. They are a treasure that belongs to the whole world, and we all have a responsibility to the fish that spawn here to protect their habitat and the clean water supply on which their lives depend.