Settle in for the bewitching hour, it’s time to learn about black snakes. 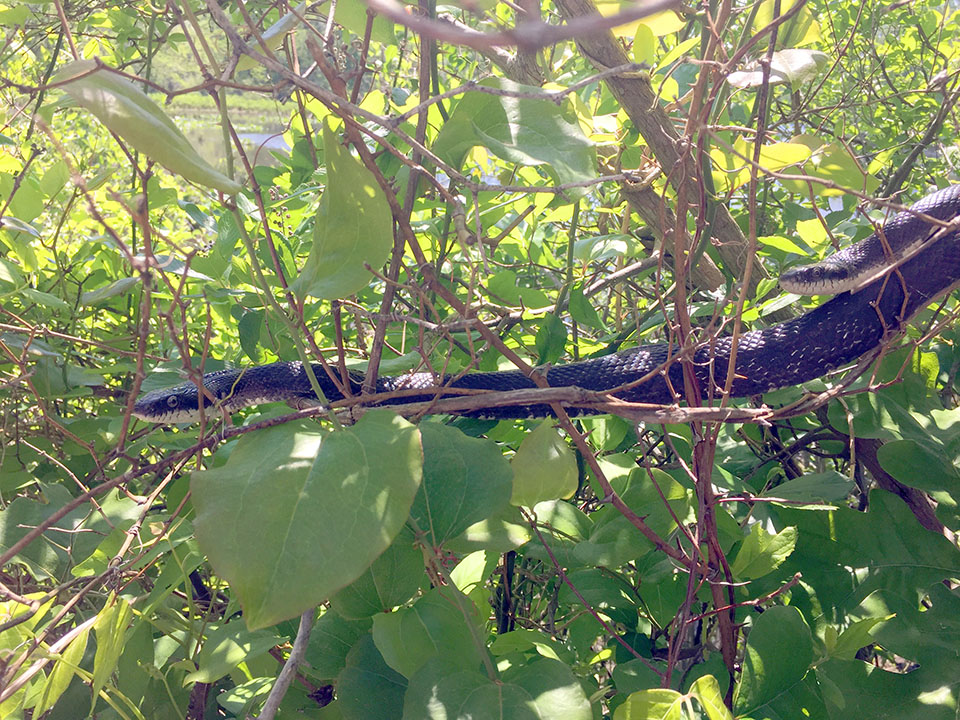 When we built our home some 37 years ago it would seem that we either displaced or created some desirable real-estate for a few local denizens who began to haunt us. The first hint that we would not be alone in the house took place even before we moved in. The insulation crew found a six-foot long clue in our attic, and brought the remnants to me for inspection. This made a big impression on me since these particular critters give me the willies.

Then, just as my husband had dozed off while watching TV after a hearty lunch, it happened. I was about to join him for some shut-eye when a young member of the attic crew slithered across the living room floor. “Snake!” I hollered. My husband seemed to go from asleep to Dudley Do Right in one swift motion. He scooped the visitor off the floor and ushered him out the front door and sat back on the sofa with a dazed look.

“Wow, I thought you were afraid of snakes!” I exclaimed, with eyebrows so elevated that they nearly shook hands with my hairline.

“Well,” he replied, “I knew there would be no peace in this house if he remained.” So true.

Thus began my many years of trying to overcome my irrational anxiety. In the beginning I would go to snake exhibits where glass separated me from the source of my fear. The motion of the inhabitants would seemingly hypnotize me; if someone were to poke me from behind I would react like an ice cube had been dropped down my back.

In my chosen line of work, being irrationally frightened of snakes is an embarrassing trait. In the late 1980s I went on an expedition with famed herpetologist Bob Zappalorti. The goal of the day was to place incubator-raised juvenile pine snakes back into their nesting sites. This species’ status is “threatened” in New Jersey, so removing eggs when they are vulnerable to predation and returning them to the wild as hatchlings gives the clutch a better chance at survival.

Bob handed me some young snakes and showed me where to release them. I feigned bravery and placed the snakes as instructed; after all, they were just little critters. After a bit Bob reached in a bag and took out a radio-equipped adult and asked me to hold it. For me it may as well have been a rattlesnake. “Uh, Bob, I have to admit to being frightened of snakes,” I told him as I swallowed hard. NJ Biologist Kathy Clark was with us and knew about my fear, so I suspect she wondered how this day would finally play out.

“No, I really want to do this,” I protested. “Kathy, can you stand behind me?”

“So if I pass out you can catch me.” They thought I was kidding. I wasn’t serious but I wasn’t really joking either. However, I didn’t faint. And it wasn’t all so bad; in fact it felt rough and smooth at the same time. Okay, so you snake fanciers are shaking your heads, but this was BIG for me.

Snakes still give me a jolt emotionally. I have to take a deep breath before handling one and I still prefer not to, but I’m growing. Intellectually I’m all in. So stay with me.

That brings us to the critters that were haunting our attic and probably still are—black rat snakes who left their shed skins behind. I say “haunting” because you rarely see them: Their black bodies hide well in the shadows. Work with me here; this is still my Halloween series and we are about to get into some black magic.

Black snakes are rarely aggressive to humans. They rely initially on the camouflage of the darkness on the forest floor and remain very still if they sense you. Therefore you rarely notice them. Most field guides describe them as shy and avoiders of confrontation; they possess a passive demeanor. Only if provoked or cornered do they consider displaying their intolerance. Their defense posture is to coil, raise their head, make an S in their neck section and open their mouth to strike. They can be snappy compared to other rat snake species and wriggle their tail in leaves to imitate a rattle. They also emit a musk to ward off intruders. One time when I disturbed a group sunning themselves on a stump pile they cracked their tails like whips. I’ve spoken to a number of herpetologists and none are aware of this behavior.

We have two rat snakes in New Jersey—the corn snake, sometimes called a red rat, and the black rat. The corn snake is endangered here and there are very few recorded sightings. Our focus is on the black rat snake.

If you have a henhouse you are likely all too familiar with black rat snakes. They like to eat eggs and are not a favored visitor. In fact one common name for them is chicken snake because of their propensity to hang out near poultry. As their name suggests they eat rodents, too. On the other hand, if you own a corncrib or have other harvests that attract rodents to your farm, a rat snake is a cherished inhabitant. Since they dispatch these pests and pose no threat to people, they are considered beneficial.

One fascinating study of Siberian chipmunks found that these rodents will rub their bodies in snake urine and skins to discourage snake attacks. Black snakes are known to continue hunting even after a kill, similarly cloaking themselves in their prey’s scent to go undetected.

Here’s some interesting snake wizardry; they do not taste with their tongue but rather they pick up chemical traces and transfer them to the roof of their mouths at the Jacobson’s organ, where the chemical traces are analyzed. This special sense is called vomeronasal. The chipmunks use chemical clues to trick their predator into smelling another snake versus their own tempting scent.

Black rat snakes are constrictors; they will seek prey but also rely on ambush. When successful they suffocate their catch by coiling tightly around it. Individual black rats can grow to just a tad over eight feet, making them New Jersey’s largest snake, capable of strangling fairly large prey.

Let’s return to their interest in eggs. In forest habitat they climb trees to access a favored meal of bird eggs. In fact the black rat snake is considered arboreal. The corn snake is viewed as more terrestrial, but recent radio tracking has revealed that they spend more time in trees than previously thought.

Biologist and herpetologist Professor Howard Reinert, of the College of New Jersey, once told me about their unique anatomy at a Nongame and Endangered Species Advisory Committee meeting. I wondered how they could cling vertically to a brick wall with seemingly nothing to support them.

Tune in next week, my ghosts and goblins, to learn how Howard described their black magic and for other secrets of these snakes, as well as how you can help to protect them. n

NJ Guide to Reptiles and Amphibians, NJ Fish and Wildlife

Special thanks to Howard Reinhert