Delsea Drive-In was the perfect spot for Don Haynes, sealed in a car, to get off the road and take in a movie. 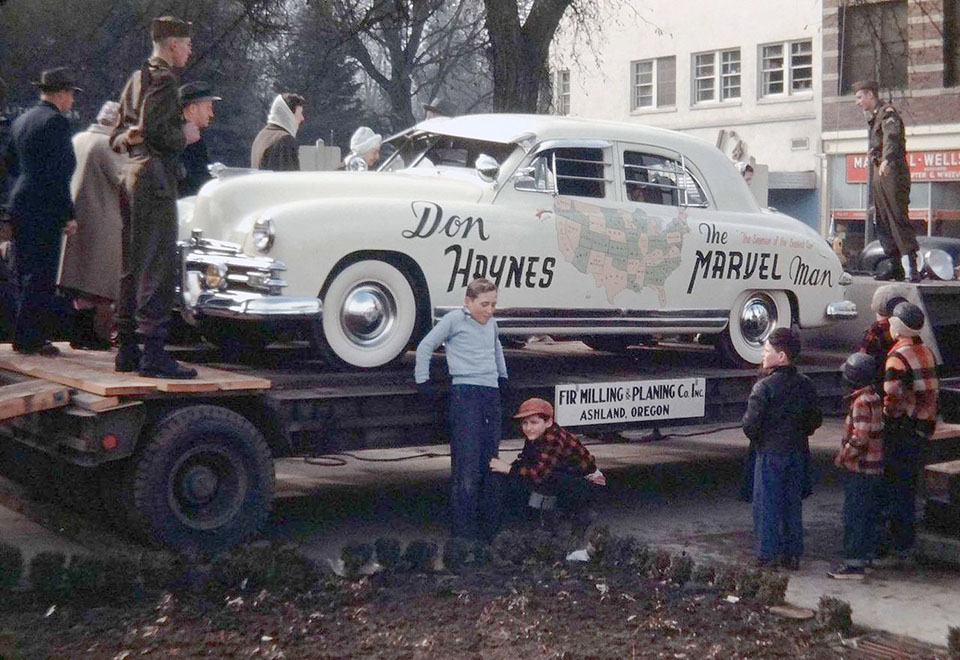 The newspaper advertisement from Ames, Iowa consisted of text and a photo of an automobile, a 1949 Kaiser DeLuxe whose side panels sported the words “Don Haynes – The Marvel Man” in a fancy, decorative font. “You’ve Heard About Him – Now SEE the ‘Seaman of the Sealed Car’ ” proclaimed the text above the vehicle. To the left of the car were the words “$25,000 Bet,” to the right “$6,000 Car.”

For most of 1949 and a portion of 1950, Haynes commanded the attention of the national media as he motored across the country and back several times in the Kaiser, whose doors had been welded shut and side windows blocked by chrome bars. His goal was to travel all 48 states of the U.S. at the time without ever exiting his car and, for nearly 14 months, he attempted to do just that. At least that’s what articles at the time reported. But Haynes’s journey might be a bit more complicated and a tad more suspect than that.

Reportedly 39 years old at the time, Haynes was acknowledged as a resident of Ashland, Oregon. Formerly a Merchant Marine and truck driver, according to a 2014 article in Hemmings Motor News, “he apparently stumbled upon a new way to make a living behind the wheel” when he “claimed that he made a $25,000 bet…that he could travel to all forty-eight states without leaving his car.” The wager was allegedly made with an Oregon rancher from Grants Pass or Ashland whose name has been variably reported as Mauldin, Mulden or Malden.

Haynes soon acquired the Kaiser and arranged to have himself sealed into the vehicle, but not, as the Hemmings Motor News article reports, “before equipping the Kaiser with a chemical toilet, hot and cold running water, a folding bathtub, electric shaver, electric blanket, exercise equipment, a typewriter, a radio and record player all to go with the rear seat that folded into a bed.”

In 2009, an Oregon newspaper, the Medford Mail Tribune, wrote that “Haynes was given a brass-band send-off on February 18, 1949” and began his tour of confinement by heading to California, where he began drawing attention through appearances, interviews and the self-promotion emblazoned on his automobile. Somehow, he planned on traveling a total of 140,000 miles to complete his jaunt through all the states.

Haynes covered a portion of the country in his first several months on the road. According to Hemmings Motor News, early in April “he returned to Ashland and somehow got a crane to lift him in the car to his wife’s hospital room when she gave birth to their daughter.” The Medford Mail Tribune reports the existence of a photograph that “shows the Kaiser, with Haynes inside, being lifted to the hospital window by an industrial hoist.”

Hemmings Motor News places him in Ames, Iowa on Friday, May 20 for his advertised appearance at Daulton Motors from 6 to 9 p.m. Over the course of the next month, Haynes headed for the East Coast on a run that would include stopovers in Atlantic City and Washington.

But between those two points, he paid a visit to Vineland, taking in a movie at the Delsea Drive-In on June 21. While there, he told reporters that he usually spent time at sporting events and other outdoor activities on his travels. His itinerary, he explained, would take him to the Mid-West after Washington and then back to the East Coast for the World Series in October.

While in Vineland, Haynes reported that he had already traveled a total of 15,375 miles. Hemmings Motor News places him in Los Angeles in November “claiming he’s already covered 73,000 miles and confident he’d win the bet.”

By that time, it’s likely the postcards offering a view of Haynes sealed in his car began surfacing, the text of which, according to the Hemmings Motor News article, reads, “Don gave serious thought to the purchase of a car, because it would be his home for more than a year. He finally chose a Kaiser DeLuxe because it offers unexcelled riding comfort, the roomiest interior, dependable and economical operation, and an engine that could assure uninterrupted service for 140,000 miles.” n

Next Week: You Better You Bet