There was an error in the photo caption below in an earlier posting and it has been corrected. SNJ Today regrets the mistake.

Everett Marshall has never allowed misfortune to direct his life. 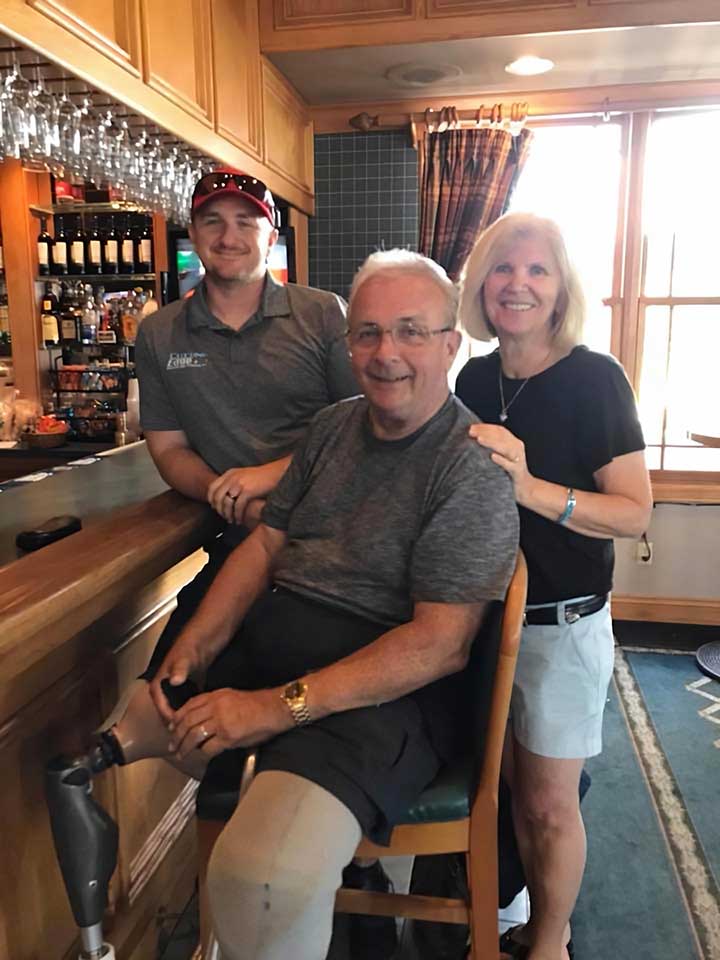 Everett Marshall with his wife Christine and son Matt.
by Mickey Brandt

Wise people often advise us to live each day fully because at any time you could get hit by a truck.

Everett Marshall lived fully. He never got hit by a truck. But, in a horrendous turn of fate, he got caught in a burning and exploding one.

“I climbed on top to start the cleaning process,” he told me. “All of a sudden I heard a rumbling sound and knew I was in trouble.”

The oil tanker trailer blew open and caught fire. A freak accident. One that should have been fatal.

Marshall somehow crawled toward safety. A volunteer fireman from his own company who happened to be nearby pulled him out. The ambulance came, then the emergency helicopter. Marshall passed out from the intense pain and severe burns.

“The last thing I remember is the EMT guys telling me not to leave them,” he said.

Marshall was lucky, determined, well supported, and, he believes, received love from God through prayer.

He was in the hospital a long time.

The burns all over his body were grafted for years.

In time, his amputated legs were replaced by prostheses.

His physical therapy was torturous for a long time and still continues.

But so does his spirit and caring for others. And so many care about him.

“I can’t imagine my life before the accident being as great as the one I have now,” he astonishingly said. “I’ve met so many fine people and gained so many new friends.

“I in turn have helped many people by sharing my experience—if anyone thinks their life is over after a traumatic event like this, please contact me.”

I asked Marshall about his health right now and he said pretty good. At 71, his main complaint seemed to be the discomforts of aging. The future, though, concerns him a bit.

He admitted having a problem at night, when he has to remove his artificial legs to sleep.

“When I need to turn over, I have to sit up to roll myself and that can be every hour,” he said. In the next breath, he noted, “But I sleep better now than I did before the accident.”

Marshall was a highly respected politician in his hometown of Newfield. He served in office, with some time off, over a period of 40 years with 25 as mayor. He continued in that role for a time after his tragedy, including calling in to meetings from the hospital.

He was a longtime trucking company manager. He coached and umpired youth baseball for decades and worked with former major leaguer Don Money in running the Sacred Heart High School and men’s semi-pro Forest Grove teams. He played a lot of golf—but now, he says, “not so much.”

He’s a storyteller with an edgy sense of humor. He’s a world-class collector of Matchbox cars and paraphernalia; his Newfield museum holds more than 50,000 items.

Community legend is not an exaggeration. He and Christine, his wife of 49 years, moved to Lighthouse Point, Florida 10 years ago to be closer to family members. In all, they have three children and six grandchildren. He credits his immediate and extended families with giving him the willpower to slowly rebuild his life.

The coronavirus crisis was only a mild setback to that life.

“My only problem was I couldn’t social distance from my refrigerator,” he said, admitting he gained almost 20 pounds.

Marshall’s life, while normal under his ironclad optimistic standards, is actually challenging. There’s a stumble control implanted in his leg and he has to be careful with stairs. He rides in his wheelchair whenever there’d be too much walking. Rehabilitation therapy is tough.

He can still cook, but “only sometimes.” He said he can bike just 10 or 12 miles a day now and rode in a “half —not a full—marathon.” He’s relegated to driving a modified, hand control SUV after not driving at all for a long time.

“At first, I had trouble stepping into the SUV,” he said. “But when they replaced my computerized right leg with a new one, I was able to turn it around completely 360 degrees and that solved the problem.”

He described a related difficulty few of us have had since age 17: He had to get a hand control driver’s license and actually take a test.

“I disregarded a stop sign in the parking lot so I could have flunked,” he told me. “But the examiner said I seemed like a nice elderly man and she passed me.

“That’s not all—my wife says I’m a better driver now than when I had legs.”

While many a person would have been thoroughly defeated by such a trauma and the lifelong limitations, Marshall simply refuses to be.

He’s going to Albuquerque in the fall for a Matchbox convention. He travels with his son Matthew to help run HAZMAT safety seminars. (There’s never been a credibility issue, he said.) He commutes often to South Jersey to see family and friends and lead museum tours.

“My friends started it after the accident as an incentive for me to get me out of the hospital,” he explained.

Everett is back in baseball, too, coaching a recreation league team of 12-year-olds.

“I ride down there in my wheelchair and I love it—just helping the kids as much as I can,” he said.