Millville’s Coach Ed Salmon has had a slam-dunk since the 1970s with his early morning pickup game. 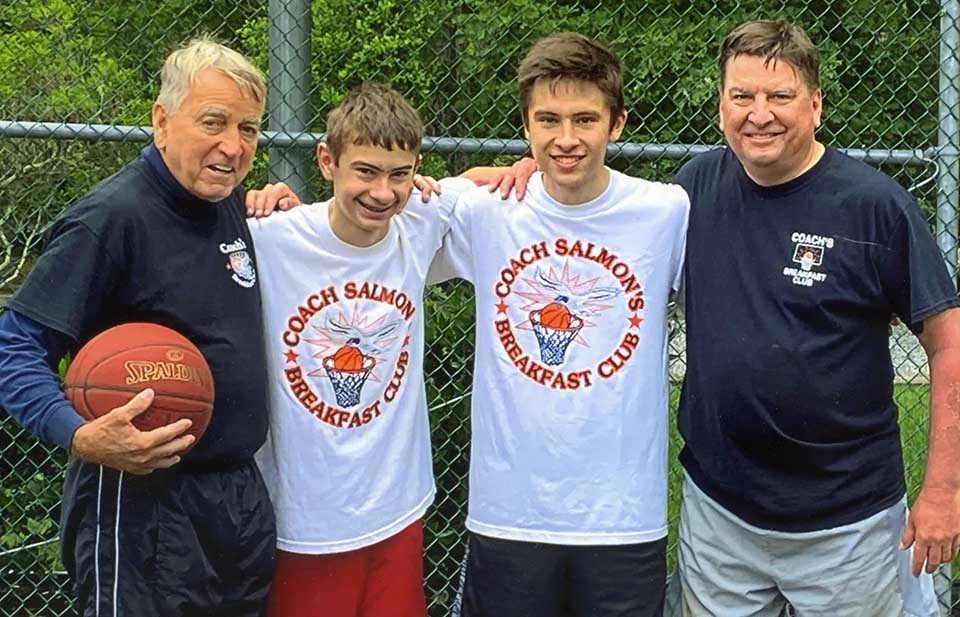 Ed Salmon, grandsons Eddie and JJ and son, Jim on the backyard court they and other family members used almost daily during the pandemic last year when there was no “Breakfast Club” basketball.
by Mickey Brandt
Photography by Photos courtesy of Salmon Ventures It’s fall, 1970. The 28-year-old former Millville High School boys basketball coach Ed Salmon, two years after he helped his team go all the way to the state semi-finals, starts a little 5:30 a.m. pickup game every day in the gym and invites students and teachers to play for exercise.

It’s fall, 2021. The 79-year-old Ed Salmon has accomplished a lot in his life. And he still has the games. Those same games. At the same 5:30 start. He supervises them. And, astonishingly, he plays in them.

Everyone we talked to mentioned these same three things about coach Salmon: He’s a terrific guy, it’s a wonder of nature how well he can still play, and he loves to win.

“I always had a passion for basketball and when we started this, it was a way to fit in a good workout,” Salmon said.

From just a good workout, the program soon grew to one of the elite pickup game venues in the region.

“Ed went to everybody who was athletic—runners, football players, all of them, and asked ‘Do you want to play some basketball,’ said legendary Millville football coach Tony Surace. A lot said sure.

“In the heyday, players would drive 50 miles to be there, seven days a week” said Vineland lawyer Rick Pescatore, 63, who started playing in 1986 and is the co-leader. “For me, it’s a great part of getting up and getting your day going.”

Salmon estimates more than 2,000 athletes, male and female, have been “members” of “Coach Salmon’s Breakfast Club,” a blend of fair, competitive ball with some networking built in. They’ve ranged in age from under 18 to over 70.

“You had guys from every walk of life going there to play, just people getting along and playing some basketball,” said Pescatore.

The Breakfast Club membership peaked after Salmon opened it up to all in 1985. During a Thanksgiving Sunday when a lot of players were home from college, 90 men and women showed up.

The program was scaled down when Salmon turned 50—to only six days a week. Now, with many regulars 40-plus, games are Tuesday, Thursday, and Saturday. Yep, 5:30 except 6:30 on the weekend. (“We can sleep late,” he said.)

Some say the coach’s wife of 57 years, Marilyn, had a hand in that scheduling.

Over the decades, some dominant participants played “above the rim,” including some from Division I college teams, European pros, and WNBA prospects, according to Pescatore.

Michelle Brown, who described setting a career points scored record at Millville High, only recently broken, was a regular in the early ’80s. “I loved bringing it to the guys,” she said. “It was highly competitive and we women were welcomed as equals.”

Fun, fellowship, sportsmanship, kindness, and civility were always encouraged in the gym pickup games, but so was winning.

Pescatore, who rarely misses a morning and usually plays on Salmon’s team, credits his good friend with running a “super, super controlled game where everybody welcomes and abides by the rules.”

Those rules have always favored the “mature” players. If you were over 50, walking couldn’t be called. If over 60, when you touched the ball, you got possession of it. For players over 70, if a defender touched you on offense that was a foul and you got a foul shot. If there’s an argument, the older player gets the call their way.

“It kept the older players coming, that was important to me,” Salmon said. “But next year, I need a new rule for age 80, don’t I?”

“Ed’s love for basketball is exceeded only by his love for his family and his faith,” said Surace. “And he’s one of the most competitive guys I’ve ever seen in my life.”

Breakfast Club participation leveled off as the century ended, to between 24 and 40. Partly because of the Covid interruption, it’s now under 20, but still going strong.

As with almost all else, games weren’t held last year, in what is still considered the golden anniversary. During Covid, Salmon played on his backyard court almost every day with family members and an occasional breakfast club visitor.

“Basketball is my love,” Salmon said. “As in the rest of my life, I try to motivate people—lift them up, engage them in a positive way, I think everybody should do that.”

Dr. Edward H. Salmon grew up and went to high school in Lemoyne, PA. He attended Gettysburg College, interestingly on a track scholarship, but also played varsity basketball all four years and graduated in 1964.

He was then hired to teach and coach at Millville High and he was, at overlapping times, a coach of basketball, football, and track. Marilyn also worked at the school and it’s estimated they taught more than 7,000 students in their combined five decades there.

His basketball team’s records made him New Jersey’s Basketball Coach of the Year in 1969 and 1970. He’s in the Millville, South Jersey, Thunderbolt, and All Sports Halls of Fame. He left coaching after six years to obtain a master’s degree and later earned a second master’s, and then a doctorate.

Fast becoming a Millville fixture, Salmon entered politics and was elected a Millville city commissioner and then, at 30, the city’s youngest mayor in 1973. He went on to become a County Freeholder, State Assemblyman, and president of the New Jersey Board of Public Utilities. He is currently the founder and chairman of Salmon Ventures Limited, a consulting firm in Millville.

So, if you’re athletic, you know where to be at 5:30 a.m. three days a week. If you’re 50 or older, you can benefit from the rules. If you’re going to be 80 next year, you’re Ed Salmon and you shoot as well as you did in college.

As if the Millville early AM games were not enough, Ed Salmon took the concept on the road 30 years ago. He is former president of the New Jersey Board of Public Utilities, and a key member of the National Association of Regulatory Utility Commissioners (NARUC).

The following is excerpted from the NARUC description marking the 25th anniversary in 2016 of the “NARUC DREAM TEAM.”

In 1991 Dr. Edward H. Salmon, established the NARUC DREAM TEAM competition to be held at the three major NARUC Conferences —Winter, Summer and Annual. Everyone attending those conferences was invited to participate.

Commissioner Ed Myers from the District of Columbia designed the NARUC DREAM TEAM logo that is on the game shirts and hooded sweatshirts.

For the past 25 years NARUC Basketball has provided its players opportunities for good competition, lots of fun and lifetime friendships.