A Launchpad for Ivy League Success 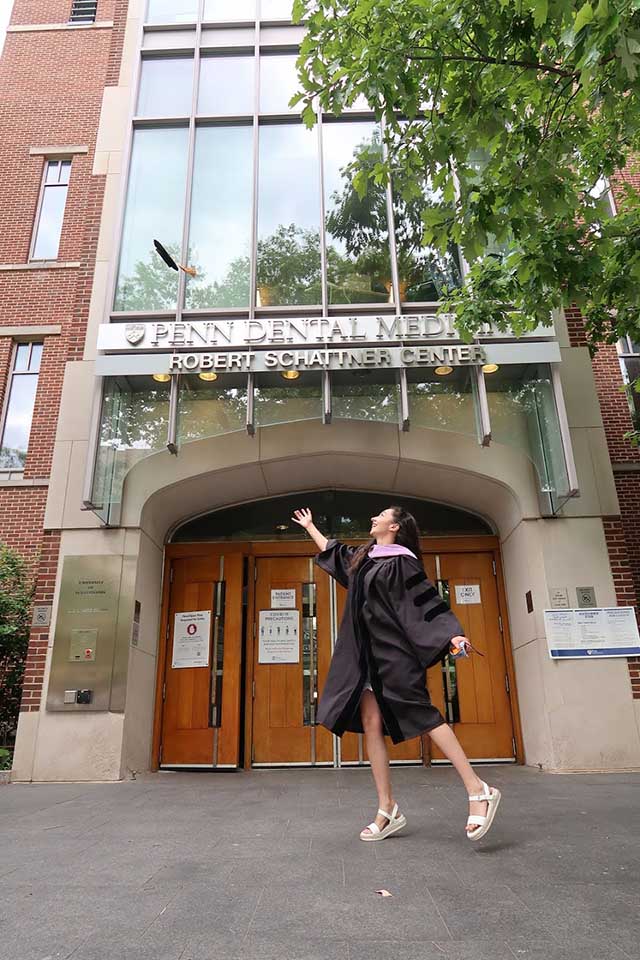 On May 17, after years of hard work and dedication, Dr. Alexa Martinelli, a 2015 graduate of Rowan College of Gloucester County (RCGC)—now Rowan College of South Jersey (RCSJ)—received her Doctor of Medicine in Dentistry (DMD) degree from the University of Pennsylvania School of Dental Medicine. The former Gloucester County resident, who now resides in Georgia, did not allow self-limiting beliefs and the mystique of a hallowed Ivy League school deter her from reaching for the stars.

“Never tell yourself that you can’t do something,” Martinelli said as a message to current and future community college students. “When I look back at my early college years, having blind faith really helped. I do not mean wishing on a dream and counting your lucky pennies. I’m talking about working hard and having the audacity to reach for big opportunities.”

Martinelli launched her career as a pediatric dentistry resident, earlier this month. While attempting to find her fit at RCSJ, Martinelli became intrigued with the field of dentistry after a suggestion from her orthodontist.

“The field was very enticing because there’s a multitude of concentrations to fit anyone’s personality,” said Martinelli. “There’s a good work-life balance and you know what to expect every day.”

The DMD, who earned an associate degree in Chemistry Pre-PharmD from RCSJ, is excited to embark on this new journey where she will get plenty of opportunities to make people smile.

Martinelli, who also received her bachelor’s degree in Biological Science from Rutgers University-Camden, had a mouthful of glowing things to say about her time as a community college student.

“I loved my experience at Rowan College. I always felt like teachers were willing to go the extra mile for you,” she revealed. “The smaller class sizes meant that you could get to know the teachers really well and this fostered an excellent relationship for students to be able to seek help whenever we needed it. I really enjoyed how flexible it was to schedule classes because I was working a lot while I earned my degree.”

Martinelli said the greatest lesson she learned at RCSJ was how to meticulously manage her time. “Since you’re living at home while at community college, you’re usually juggling a full personal life as well,” said the dentist. “I realized that to perform well, I had to schedule in my studying time. This created good habits that stuck with me…. I still live by lists and calendars.”

Dr. Robert Rossi, professor of chemistry at RCSJ, was impressed with Martinelli after meeting her in his General Chemistry II class, in 2014. “It did not take me long to realize she possessed an outstanding talent for science, coupled with an excellent work ethic and persistent desire to learn,” he recalled.

“The key to success in any chemistry course is to practice your problem-solving skills by doing as many problems as you can until you have the concept mastered,” Rossi continued. “Alexa was one of those rare students who recognized that and always looked to challenge herself with more and more difficult problems.”

Martinelli—an embodiment of the community college success story, having earned her doctorate from an Ivy League school—is considerably proud of her accomplishments and hopes to inspire others to strive for their goals. She encourages students to focus on their studies to the best of their abilities and make the most of their time spent at RCSJ.

“Since you’re in college, that needs to be the priority because you can never change those grades once you get them,” said Martinelli. “I was able to manage both, but it’s easy to get distracted by a job that’s putting money in your pocket, right now. Trust me, get used to being a college kid. That’s a job that pays off!”

Start writing your own community college success story; visit RCSJ.edu/Degrees to discover the many paths to a rewarding healthcare career that start at Rowan College of South Jersey.