Not always a sky-high penthouse, nests of some birds are found in burrows or as “scrapes” on the ground. 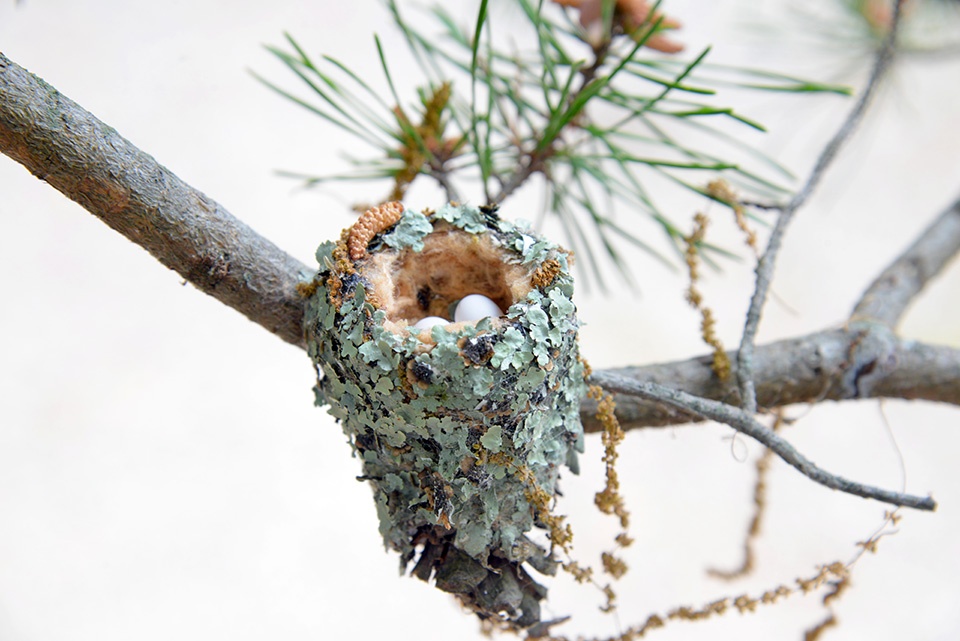 The cupped nest of a hummingbird is lined with spider web and cottony seed heads from cattail. It is 1 to 1-3/4 inches in diameter and camouflaged with lichen.
by J. Morton Galetto, CU Maurice River

Oftentimes when I lead a nature walk someone will point and ask me, “So what bird belongs to that nest?” That can make me cringe, since there are about 480 species of birds that can be identified at various times in New Jersey. Chances are good that my answer would be, “Beats me!” and especially if the resident is absent. Luckily the hikers often point out some very obvious nests in our region.

Thinking about this made me wonder how there came to be so many different nest construction styles, and why a nest style is so specific to a species.

Some ornithologists theorize that lack of shelter is partly responsible for nest building and that a shortage of dead tree cavities or natural crevices possibly promoted the evolution of nest building. This might be true of certain cavity-nesting birds who have evolved to use trees, but it seems an unlikely explanation for colonial nesting birds who choose the ground.

Many different strategies are in play. Habitat may have dictated that a number of colonial birds who use scrapes or saucer nests on the ground seek to protect themselves by relying on more eyes to detect intruders and on their numbers to drive them off. And some colonial birds do use trees—for example, herons in a heronry. However, many scrape-nesting species are reliant on solitude and camouflage for their safety.

Birds who nest in colonies on islands are thought possibly to have been pushed to isolation in conjunction with the introduction of mammal predators. However, isolation can fail, as in the rapid decline of many island species when European colonists brought foreign, or non-endemic, species such as cats, rats, pigs and goats.

Habitat often dictates the design of the nest. A marsh wren makes use of marsh grasses. Seaside birds are likely to use tidal marshes, sand shores, and rocky islands so they nest on the ground. Many passerines who rely on caterpillars for their young need to be in forests that can feed the larvae; thus they use trees or forest floors.

Some birds are opportunists and don’t build their own nest at all, but rather take over a nesting site. The great horned owl raises its brood early and uses a nest constructed in prior year/s by a hawk.

Nests tend to fall into nine types. There is the “scrape,” which is on the ground with a depression that is often not evident but is enough to keep the eggs from rolling away. Wild turkeys, some ducks, and turkey vultures are a few examples of species that use this style of construction, or one could say lack of construction.

There are also “saucer”-shaped nests on the ground, just one step above the scrape. An elevated saucer with more elaborate structure is a “platform” nest. These are typically in trees or on cliffs and used by birds of prey or wetland birds, such as hawks and eagles or herons.

Many songbirds make a “cup” nest. These are some of the most difficult nests to tell apart if you’re not an expert. Size, building materials, habitat, and height of placement are all diagnostic of the specific bird. Eastern kingbirds’ nests can be among the easier to identify. They are normally halfway between the tree trunk and branch’s end, although I have occasionally seen them near the tip. The outside is usually messy vs. some cup builders whose nests look as if they used CAD drawings to achieve perfection. The kingbird often incorporates feathers among his materials. The outside diameter, about 5-1/2 inches, is considered rather large for the bird’s size. It will be set about 10 to 20 feet high and is often over water. But there are lots of exceptions to these rules, including martin gourds, tree stumps, and swamp snags.

The remaining nest types are more enclosed. These are “tree cavities,” “rock crevices,” “burrows,” “pendant” or “spherical.” Cavity nesters need trees large enough to support their species size. They often rely on a combination of insect borings and insect-drilling birds to create the cavity, unless they are a bird that drills like a woodpecker. Tree-nesting ducks and owls, for instance, do not hollow out trees for themselves, but make use of existing openings made by others.

A number of the seabirds use rock crevices, typically on rocky islands. Puffins, auklets, murrelets, guillemots, and razorbills all nest in these kind of openings.

Burrows are excavated primarily by their tenants. On the coastal bluff of the Maurice River, we find the holes of kingfishers and bank swallows. In the western half of the United States, burrowing owls dig their own nests or make use of the abandoned burrows of prairie dogs, skunks, gophers, armadillos, and the like.

Pendant nests are sack-like and suspended from a branch. These can oftentimes be a good strategy to protect against mammal predators, in that the animal risks the nest falling when it places its weight upon it. They are often built rather high in a tree where a fall could be lethal. Parula warblers and orioles are examples of pendant builders. One of my favorite colonial nesting birds is Central America’s Montezuma Oropendola, whose name derives from the shape of its nest, hung in trees like the pendulum of a clock.

Spherical/globe nests are built to disguise the contents and protect them from the elements. Along the Delaware Bayshore we see the nests of marsh wrens, which are considered spherical. I believe they are the only such nest builder in the eastern United States. Among the passerine or perching birds of North America, only 23 percent use holes or dome-shaped structures; the vast majority build open nests.

In addition to using the nest as a safe harbor, some birds incorporate other protections into its fabric. Hawks will include leaves containing a pesticide that discourages parasites. And some birds smear toxic insects along the border of the nest to deter pests.

Before nesting birds were protected it was common for hobbyists to collect eggs from nests. Many of our famous ornithologists from earlier centuries started out as egg collectors. I remember Clive Minton’s stories of falling from trees in his quest to complete his collection in England.

Although nests are most easily identified when occupants are present, good birding etiquette would dictate that you don’t disturb the tenants but move along. Different species have different tolerances for disturbance and parents can abandon their young if they feel continually threated.

Many strategies are in play and each bird has its own adaptations and approaches to nesting—a study unto itself. To learn more about nesting habits the Birder’s Handbook, by Ehrlich, Dobkin, Wheye is an excellent resource. It is a fantastic book that looks at nesting, food preferences, brood sizes, foraging habits, young’s birth status and more, for North America’s birds.