Father’s Day at the Veterans Memorial Home was the first day family members could meet since March. 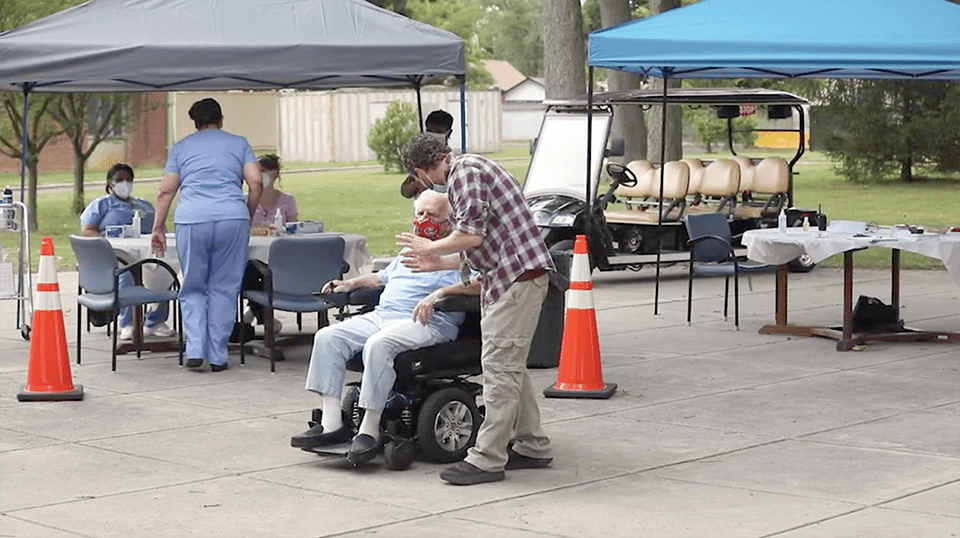 by Mickey Brandt
Photography by Photos from video by U.S. Air National Guard

There was a lot to celebrate on Father’s Day this year at the Vineland Veterans Memorial Home. Not only were families allowed to visit their loved ones for the first time since mid-March, but also the home has apparently avoided the worst of the COVID-19 outbreak that has ravaged nursing homes throughout the country.

The special occasion was held outdoors under state guidelines with social distancing, face masks, and all other precautions. Airmen with the New Jersey Air National Guard’s 177th Fighter Wing assisted during the event.

“It’s not all about getting ready to go to war or dropping bombs,” Chief Master Sgt. Harry Johnson said in a video supplied by the U.S. Air National Guard. “It’s about helping the community, so something like this is really rewarding…this is probably the most rewarding thing about being part of the New Jersey Air National Guard.”

It was a reopening of sorts for visitors, although for now all visitations have to be outdoors. This didn’t dampen the atmosphere for the family members.

“I appreciate all the precautions that were taken,” said Brenda Baxter of Franklinville in the video. “I’ll tell you, this facility has done a marvelous job of keeping us informed. I get something every day telling me exactly what’s going on here. It was great to be outside and talking to my dad. This was wonderful.”

A complex chain of events led to the Cumberland County home having such a double-faceted successful celebration.

There are three veterans homes in New Jersey, each charged with doing its best to ensure the final years in the lives of these heroes, spouses, and Gold Star family members are spent with as much comfort, dignity, and expert health care as possible.

The vulnerable populations of the two veterans homes in northern New Jersey have been devastated by the COVID-19 outbreak. Virtually every resident of the centers in Menlo Park in Middlesex County and Paramus in Bergen County have tested positive and the current combined death toll is almost 40 per cent of the total resident population.

In southern New Jersey at the Vineland installation, the largest of the three, the story is dramatically different.

At the Vineland home, which has served New Jersey veterans of every war and armed conflict since the War of 1812, there have been eight cases of COVID-19, with three deaths.

Two scenarios combined to produce these disparate results: The timing and location of the outbreaks in New Jersey and the efforts made and methods deployed in Vineland to protect the residents.

The north was hit by the spread of the virus earlier and significantly harder than the south. When the veterans centers were locked down in mid-March, infection had apparently already spread at Paramus and Menlo Park, but there had been no evidence of cases in Vineland. By the time all new admissions were halted on March 23 and staff masking became mandatory on March 30, the community spread in Bergen County generally and at the veterans home and other nursing homes in particular was already troubling. (Bergen County borders on New York City, the initial national epicenter of the outbreak. Middlesex County is south of Bergen County and experienced its crisis a bit later.)

There were media reports of angry complaints from distraught relatives of the residents in Paramus that officials had not informed them of conditions in the home until the epidemic was out of control.

The New Jersey Department of Military and Veterans Affairs (NJDMAVA) attributes the success with controlling COVID-19 in Vineland to be a matter of good fortune, like being in the right place at the right time.

“It’s not because the homes are being run any differently,” NJDMAVA spokesperson Kryn Westhoven said. “It’s just because of where they’re located—when you look at Cumberland County versus Bergen and Middlesex, there’s quite a difference in the number of cases—just look at the NJ Department of Health (DOH) COVID-19 state map.”

While the protocols to control the virus in Vineland were formally the same as in the other homes, there is evidence they may have worked more effectively.

“It made a big difference that the Memorial Home here was able to immediately quarantine every infected resident upon their return from the hospital,” said Joe Romano of Vineland, who was the chief operating officer of the home for 20 years before his recent retirement.

“Residents told me the large auditorium was retrofitted into an isolation space, run consistently by the same personnel, which ensured that no COVID-positive resident was in contact with the other population,” he added.

Concurrently, activities for the residents were stopped, visitors and volunteers were barred, and every new person admitted was quarantined for 14 days.

“The housekeeping team is also outstanding and there’s a second overtime shift for extra cleaning and disinfection,” Romano said. “Our facility stands out, it does an outstanding job.”

There has never been a shortage of praise over the decades for what has been called colloquially the “Old Soldiers’ Home.”

“They treat every resident like a family member; they are some of the most caring people I have ever met.” said Ben Notaro of Vineland, who, with others, organizes annual classic car shows at the Memorial Home to honor the veterans. “They stay two steps ahead of this madness we call a pandemic so they can protect their people.”

This year, about 35 participants staged a “Cruise By” instead of a show—with flags, banners, and horns blowing as they circled the grounds.

“It’s the least we can do for all the sacrifices these men and women have made for our country,” Notaro said.

Westhoven noted, “We have followed all CDC and DOH guidelines at all three of our homes and the governor has to approve much of what we do.

“We conduct a temperature check of every employee on every shift and any positives have to quarantine at home for 14 days; we have quarantine and medical accommodations for both symptomatic and asymptomatic residents; we follow social distancing protocols; use enhanced sanitation methods; have adequate PPE; and do regular universal testing.”

The fact that only eight residents in Vineland have gotten sick, with three dying, seems more remarkable considering that nursing home residents account for nearly one in 10 of the coronavirus cases in the United States and more than a quarter of the deaths, according to a recent Associated Press analysis of government data.

To better understand the pattern of virus spread in our area, it’s informative to look at comparable public records on other nursing homes in Cumberland County that were proximate and thus affected at the same time and with the same level of spread as the veterans facility.

According to DOH reports, the Veterans Home is one of seven long-term care facilities in Cumberland County. Compared to it, on average, the other six have suffered eight times the number of cases and three times the number of deaths. Four of the homes are responsible for nearly all of this difference while two have been essentially unscathed.

In late May, DOH required universal testing of residents and staff at nursing homes. There were no additional positive tests at the Vineland Home at that time. Repeat testing of residents here is underway now and with 266 tests waiting for results, all are expected to remain negative.

For the current statistics on COVID-19 impact on state veterans homes: nj.gov/military/covid19.shtml

For a daily update on COVID-19 impact on NJ long-term care facilities: state.nj.us/health/healthfacilities/documents/LTC_Facilities_Outbreaks_List.pdf