A Millville thrift store is dedicated to providing housing for those recovering from addiction, homelessness and other life-controlling issues. 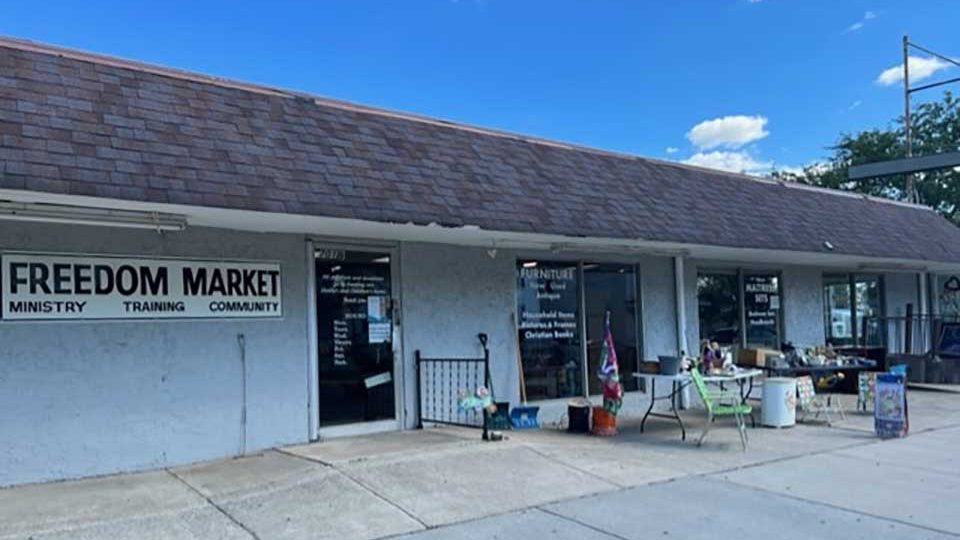 Strolling down the aisle, I let my eyes wander across the shelves of trinkets at Freedom Market thrift store. I’ve always loved thrift shopping—finding vintage items that carry a unique style. I smile as I see a typewriter and tap a few of the keys. Sometimes I wonder what the story is behind these second-hand belongings. But at Freedom Market, the story lies not in the past, but the future.

Freedom Market is a thrift store in downtown Millville. It is dedicated to raising support for its sister non-profit, Freedom Homes in Millville, a recovery housing facility for families struggling with addiction, homelessness and life-controlling issues. The idea for this outreach can be traced to one dark and fateful night in a cold hospital bed.

“I overdosed, I almost died,” Alfred Defeo, pastor of Freedom Homes said, recounting that fateful night in 2015. “And when I came to after being hit with Narcan numerous times, the person looked at me in my eyes and said, ‘What are you doing with your life?’ ”

Alfred was a normal guy. He had a house and a job, but there was just one problem—he was addicted to drugs. It wasn’t until that life-altering day in the Kensington Hospital that he truly questioned his purpose.

His friend, Bobby Bledsoe, started a church ministry some time ago in Maine. After hearing what happened to Alfred, Bobby invited him to his church’s recovery program. “He called me about a hundred times,” Alfred chuckled, “and 99 of those times I said ‘No, I’m not going.’ But eventually I gave in.” Alfred never wanted to join the program, but the way he saw it, he only had four options. One, overdose on drugs. Two, go to jail. Three, keep living his life in misery, burning bridges left and right. Four, get help. “So, I chose the last option,” he stated.

That program changed his life. During that time, not only did Alfred break free from addiction, but he also became a Christian. “I began living life in a way I never lived before” he exclaimed, “God is the best thing a person could have.”

When looking at his past—filled with money, cars and belongings that once made him happy—he realized he had been trying to fill a void. “It wasn’t until finding God that I really filled that void,” he said. “And now I just want to bring as many people to that place as possible.”

Within his story lies the mission of Freedom Homes—to bring healing and freedom to those struggling with addiction.

Three years later in 2018, Alfred and Bobby came to Millville where Alfred started Freedom Homes in partnership with Bobby’s church, Dwelling Place Church. The Freedom Homes recovery program is a nine-month stint where all that is asked of participants is their complete and total dedication. “We don’t charge people money, we do not take insurance,” Alfred said. “All we want them to offer is themselves.”

And offer themselves they do. One of Freedom Home’s boarders, Chrissy Abel, came to the program in December of 2021 after a drinking relapse. “My life was unmanageable,” Chrissy recounted. Now, just one year later, she is the executive assistant to Alfred, running all administrative aspects of the ministry while helping women, like herself, find freedom. “I know what my life looked like,” Chrissy explained. “I was able to turn it around and I just want everyone else to have the same opportunity.”

She told me she came to Freedom Homes because she knew Alfred’s wife, Michelle. Michelle’s story is much like her husband’s. Growing up in Millville, she too struggled with addiction for years. In 2016 she found healing and God at a faith-based program in New York. When she returned to her hometown, she knew what she had to do.

“My heart has always been tied to the hearts of the women and children in Millville,” she said. “I joined the homes because all I ever wanted was to see them healed.” It has now been four years since their ministry began and it has only grown. What was once one house is now three. Where there was once just a small team there is now a large community of support. Where Freedom Market was once their only source of income, the ministry has now opened another business, Freedom Furnishing and Mattress Outlet.

This newly opened store is the icing on top of this story. The hope is that this new extension of the ministry will bring in enough funding to open a larger home—a place where more individuals seeking restoration can reside. The outlet store partners with distributors that give them brand new mattresses and furniture.

The items are sold to customers at an extremely discounted rate. All proceeds go toward the provisions for boarders at Freedom Homes and the hopeful future they look towards. As Michelle puts it, “You can get brand new furniture while helping save a life.”

Though time passed and the ministry has grown to what it is today, Alfred will never forget how it started in that Kensington hospital bed. “We’re made from the same dirt. Don’t forget that,” he said. “That’s something that I really believe in with these men and women that come in here. We may be at different places, but we’re all still people.”

“Addiction affects almost every family in some way, shape or form,” Chrissy added. “And we are a place to come if you want to be loved and set free.” Freedom Furnishing is now open and will be hosting a grand opening on November 18 and 19. There will be food, beverages, music and fun for all who attend. Not only is this a great opportunity to buy some quality furniture and enjoy a fun outing, but it is also a time to invest in the community. See the faces of those who you can support and help. Get to know Alfred, Michelle, Chrissy and many others who run this ministry and learn more about how you can get involved.