An increasing percentage of the world’s population is destined to become climate change refugees due to rising ocean levels, including some Cumberland County residents. 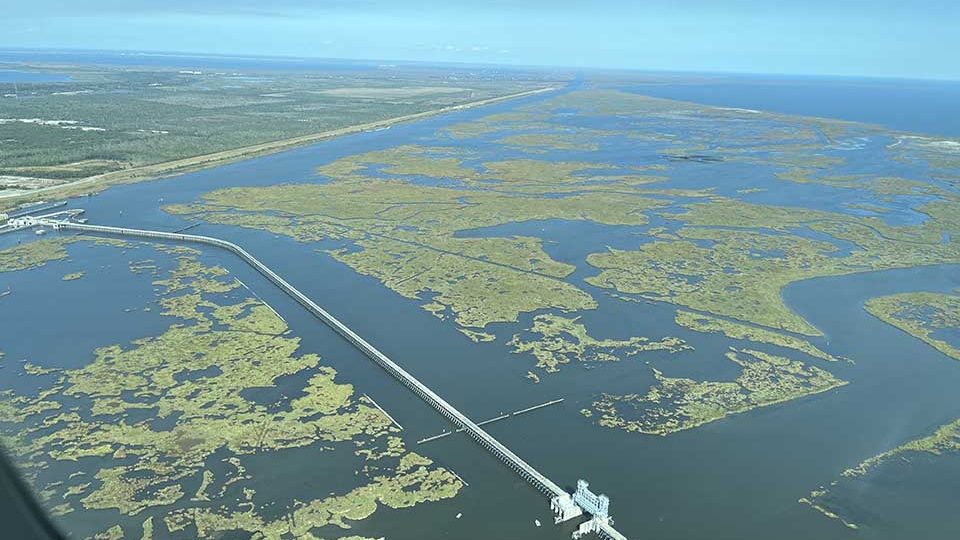 This autumn I was fortunate to go on a tour of New Orleans, Louisiana—i.e., NOLA the “Big Easy;” the land of Chitimacha, French Creole, Cajun, and later Americans. There my travel companions and I were given a presentation about the trials and tribulations of living below sea level. Afterward we boarded a flight to witness much of the engineering that has been taking place, both pre- and post-Hurricane Katrina. The Presbytère State Museum also had an extensive exhibit on Hurricane Katrina and the ravages of gulf hurricanes.

The French recognized quite early the Mississippi River’s potential for trade and control of the North American interior. In 1718 French-Canadian explorer Jean Baptiste Le Moyne de Bienville travelled 100 miles up the Mississippi River from the Gulf of Mexico. There he spied a Chitimacha tribal encampment on ground that was higher than the surrounding marshland and the delta lands he had passed, and it was there he founded la nouvelle-Orléans, or New Orleans. Higher ground would make the colony drier and easier to defend.

Jean Baptiste’s original town design was confined to the French Quarter —the “Vieux Carré” or “Old Square”—78 small square blocks in size and at one point a walled town. The southern waterfront on the Mississippi would be slightly less than a mile long. The town was bordered strategically on the north by lakes Pontchartrain and Borgne, which, via portage to Bayou St. John, provided a shortcut to the Mississippi for shipping. Goods would travel north to these lakes and then southwest to the Gulf of Mexico instead of navigating the last 100 winding miles of the Mississippi.

Today shipping occurs on the intracoastal waterway and main river, running from Texas to Florida. Since the water is bordered by 25-foot levees I would not consider the views of the river scenic, but I might not offer that opinion on Bourbon Street!

The strategic value of owning land at the mouth of the Mississippi was evident, as it gave access to 2,300 miles of river—a river that bisected North America and was rich with natural resources. For lands west of the Appalachian Mountains this was the only accessible port.

New Orleans, over its 300-year history, has grown far beyond the borders of the French Quarter, and the lands beyond are lower yet. In order for New Orleans to grow, diverting water away from developed areas has always been crucial. Channels, levees, and flap gates were all utilized to drain the flood-prone city. In 1915 one invention that changed the face of New Orleans was the Baldwin Wood Screw Pump. It resembles an Archimedes’ screw (envision a corkscrew’s spiral) used for raising water. Since the city sits between one and two feet below sea level it is less than four feet above the water table, because water is continually being pumped away from developed lands (actually wetland) into the surrounding marsh and the Mississippi. A Baldwin Wood Pump has made whole swaths of the city habitable.

The advancements of the early 1900s led to the draining of swamps and enabled development of low-lying subdivisions. Inadvertently, it also caused those soils to compact/subside in elevation, requiring greater drainage and levee protection systems.

Historically, Louisianians’ primary concern has been flooding. Flood control improvements, primarily spillways constructed after the Great Flood of 1927, have left them with hurricane surges as their greatest flood threat.

In 1965 “Billion Dollar Betsy” brought her hurricane wrath to the Orleanians, causing 58 deaths and $1 billion in hurricane damage, and flooding 22,000 homes. Then came Hurricane Katrina in 2005, leaving more than 1,800 dead and $100 billion in damages. The 19-foot storm surge also broke through the levee walls that had 25-foot-deep sheet piling in earthen embankments, but they slid when undermined by water. The levees suffered breeches and water came pouring in from Lake Pontchartrain.

Mother Nature once again proved that wetland buffers, faulty engineering and poor emergency preparation all fall short of acceptable. After Hurricane Katrina many new water control structures were put in place. Historically, engineering projects contributed to the water problems, but the only way to solve them is through more engineering. Hopefully methods going forward will work better, but the track record is not encouraging.

Levees have been redesigned since Katrina. A 1.8-mile surge barrier has been placed in the wetlands at the confluence of the Gulf Intracoastal Waterway and the Mississippi River Gulf Outlet. It’s called Lake Borgne Surge Barrier and is equipped with enormous gates that can be opened or closed. The estimated construction costs were $1.1 billion in 2013, making it the largest design-build civil works project in the history of the U.S. Army Corps of Engineers. Water can do an end run around the barrier but it is designed to act as a large speed bump in the delta. In addition to the surge barrier, $14.5 billion went toward 350 miles of levees and floodwalls, 73 pump stations, three canal closures, and four gates.

Currently, New Orleans is implementing a 50-year master plan for coastal protection. The Borgne Surge Barrier, or speed bump, better levees, and wetland restoration on the Delta itself are major components.

By the way, the cost of the entire Louisiana Purchase was $15 million—in today’s dollars about $400 million. The cost of maintenance far exceeds the purchase value. Ironically Bienville’s original French Quarter settlement did not flood during Hurricane Katrina, even when levees failed, although wind was another story. However the location of Lake Pontchartrain north of the city actually proved fatal to other areas, so that when surge barriers and levees failed much of the city was flooded from the north.

It should be noted that the vast wetland complex of the Mississippi Delta performs as nature’s sponge and buffer in the event of storm events. Obviously, storms are still brutal but without the wetland buffer, danger is compounded many more times.

Unfortunately, this delta buffer is seriously imperiled by erosion and rising sea levels. The National Wildlife Federation characterizes the loss as such: “Today coastal Louisiana is losing 24 square miles of wetlands each year—roughly equivalent to a football field every 100 minutes. Since the 1930s, Louisiana has lost an area of coastal land equal to the size of the state of Delaware.”

Living far from New Orleans one might ask, “Why should I be concerned?” Well, 33 percent of oil and 25 percent of gas production in the United States derives from the region. The port remains the nation’s leading exporter of minerals and grain. The largest port complex in the world is located at the lower end of the Mississippi. And the wetland buffer in the lower United States makes up 40 percent of our wetlands. Don’t forget that wetlands are nurseries for the fish on our dinner plates. In fact, 1.4 billion pounds of seafood in our country comes from the Gulf.

One of the major causes of lost land is the levees of the Mississippi, which cause loss of the silt that builds the marsh and supports land buffers. The Baldwin Pumps have caused “subsidence “ as land sinks when the water is removed.

Water pumped from the city now goes to the Mississippi Delta marshes. The freshwater is changing the salinity and creating hardwood swamps in the marsh. Additionally, small deltas are created by the silt carried in the freshwater and deposited on the marsh plain. Sediments are pumped onto the marsh plain to raise elevations lost to erosion. All these techniques are implemented to attempt rebuilding the delta.

New Orleanians, like Cumberland County and other New Jersey coastal residents, are losing valuable marshland buffers. In order to find solutions to our own regional issues the Army Corp of Engineers looks to other areas’ successes and failures, continually evaluating what works and what doesn’t.

The world has been watching some key coastal players who deal with living at and below sea level. The Netherlands, Venice, and New Orleans are commonly visited and studied for clues into what might be implemented in coastal areas around the globe.

These are cataclysmic concerns as cities become inundated with water and freshwater becomes scarce. The World Economic Forum estimates that more than 410 million people are predicted to be at risk from rising sea levels by 2100. Sea levels have been rising faster since about 1850, when people started burning coal and contributing to global warming.

Interestingly in 2017 Cornell researcher Charles Geisler and others estimated one-fifth of the world’s population could be climate change refugees due to rising ocean levels; that’s two billion people by 2100!

Coastal zones are the most heavily populated areas on earth. The displacement of people is something that many scientists are continually calculating. No matter whose data you use, rising seas are a global challenge from small island-states to developed economies. Our policymakers and politicians at the local and national levels may be far too focused on winning battles based on party lines, when they need to be more concerned about shorelines.

Only time will tell whether world cultures can adapt to these dramatic changes in our coastal habitats and developments. Meanwhile New Orleanians live by their motto: laissez les bon temps rouler (let the good times roll)—but it’s clear that their decisionmakers take storm protection seriously.