The fungus among us holds promise for medical breakthroughs, as well as our survival. 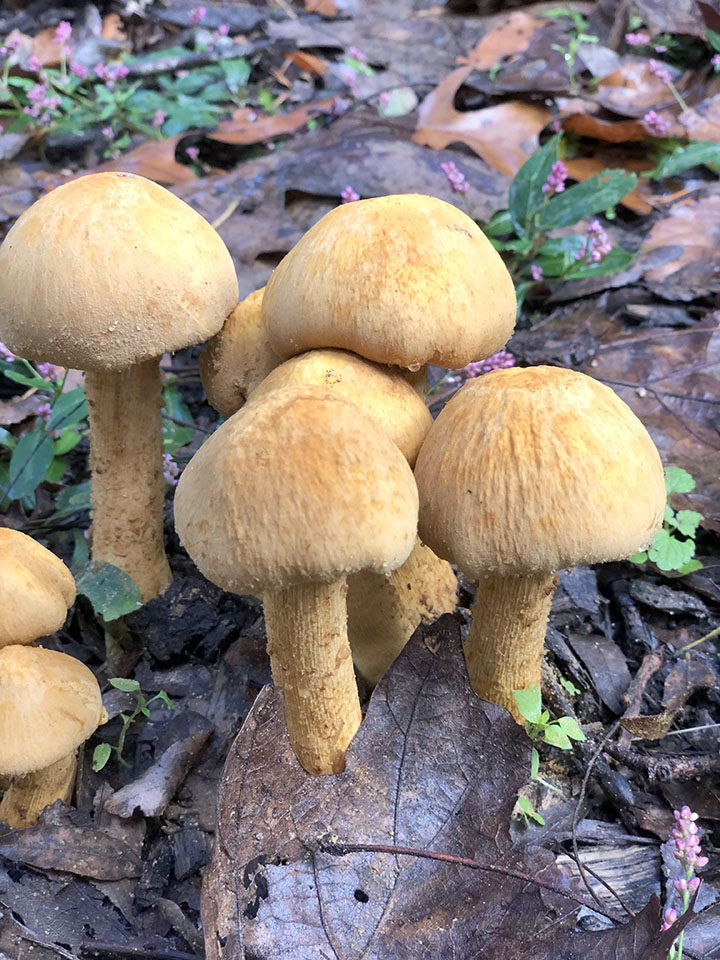 With the dampness of fall comes a crop of wild mushrooms in many shapes, colors, and sizes. Mycophagists, people who hunt for edible mushrooms, are exploring the woods for their quarry. What we see above the ground, the mushroom, is the reproductive part of the organism. It does not need light to trigger its production. Rather, four things are necessary—first rain, and then the evaporative cooling enabled by the moisture. This encourages the mycelium to wick up to the surface; it exhales carbon dioxide, inhales oxygen, and the infant mushroom begins to grow. Lastly light is necessary to produce spore-bearing fruit. The rotting sporulating spores germinate mycelium on the surface. These may appear as a web before going subterranean and out of sight.

This collection of threads or hyphae is the mycelium. Some have described the white filaments as the internet of the forest. One inch of hyphae, if stretched out, might equal as much as eight miles of cells. A mushroom is not a plant, it is a fungus, and the threads are not roots but are its feeding structure.

The most famous mat of mycelium is considered the largest single organism in the world. At Malheur National Forest in the Blue Ridge Mountains of Oregon, a colony of Armillaria solidipes, or honey fungus, is over 2,400 years old and covers an estimated 2,200 acres. This is evidenced by the dying trees. The Armillaria causes a root disease that kills western red cedar and white pine. When genetically identical mycelia meet and fuse together they form one individual. What makes it a single organism? It has genetically identical cells that can communicate (yes, you read that right), have a common purpose, or can coordinate themselves [Nic Fleming, BBC]). Put differently, it has the same genetic makeup originating from one organism. And because this fungal web can channel both nutrients and information, forest managers and mycologists compare it to the internet. 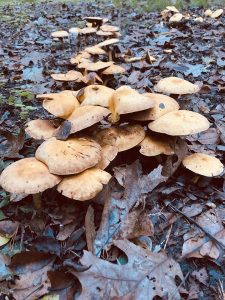 Fungi are a diverse kingdom and not all produce a mushroom. When you lift a dead log and see a white mass, these are the mycelium or the body of the fungi, and the mushrooms are simply a means of germination. Like people, fungi must obtain nutrients for growth from their environment. Mycelium develop by releasing enzymes to digest their surroundings and then absorb the nutrients. The cells continue to branch and build the mat or network.

There is a symbiotic relationship between the trees and this network of filaments; not only are fungi killing trees, but they are often unlocking nutrients that the trees and plants need, like phosphorous. And the fungus is often getting, in return, sugars and carbohydrates that it can’t produce. This is an on-going multidirectional transfer of nutrients. In fact, sophisticated communication systems exist that can, for example, send more nutrients to young saplings than to older trees.

The symbiotic association of exchanges between plant roots and fungi mycelium is called mycorrhizal. Each permits the other access to energy that allows the forest to continue to exist. In fact when the fungus absorbs nutrients from its surroundings and decomposes plant material, it creates soil and releases carbon dioxide back into the atmosphere. The trees and the fungus are all part of the carbon cycle. And the soil that mycelium can hold can be 30,000 times its own mass!

People who study fungus are mycologists, and one of the most legendary is Paul Stamets. I highly recommend that you listen to some of his lectures online to learn how important, wild, and amazing the discoveries about fungi are today. He demonstrated that mycelium could be used to decontaminate soils laden with hydrocarbons like petroleum waste and diesel fuel. In six weeks’ time mycelium enzymes broke the carbon bonds and converted the carbons into carbohydrates and fungal sugars. The pile was covered with hundreds of pounds of oyster mushrooms. Insects laid eggs on the mushroom spores, birds came to eat the bugs, and a microhabitat was created.

Stamets’ visionary ideas are continually being reaffirmed by a larger scientific community beyond mycologists. For instance, properties found in mushrooms and their underlying structure, the mycelium, are being applied in a wide variety of ways, especially within the medical field. Their functions as antibacterials, anti-inflammatories, and antioxidants are all being utilized by the medical community. Turkey tail fungus, or Trametes versicolor, is used to support beneficial bacteria, as a probiotic after antibiotic use like amoxicillin. Fungi products are showing promise with Alzheimer’s, prostate cancer, and more. Psilocybin is the naturally occurring psychedelic compound produced by more than 200 species of fungus. The psychiatric community is using it to treat PTSD and anxiety disorders.

Stamets and entomologist Steve Sheppard of Washington State University are just now embarking on distributing sugar water laced with a mushroom mycelium extract. It has antiviral properties to combat a global bee epidemic that deforms bees’ wings. The bees drink at feeders and are essentially gaining an immunity with an added benefit that their lifespans are extended. Stamets was in part inspired by 7,000-year-old cave drawings from Algeria that show a bee-man (possibly a beekeeper) with mushrooms sprouting from his arms. It is known that mushrooms were kept with honey in many cultures. Stamets’ team has an interesting distribution plan that involves a citizen network worldwide.

Stamets begins his talks by citing the cataclysmic events that caused extinctions wherein animals died and fungi survived. Fossilized mycelium is found in 2.4 billion-year-old lava in South Africa. He references “The Great Dying” in the Permian-Triassic. This is one of the five great extinctions, caused by an asteroid impacting the earth about 250 million years ago (not the dinosaur extinction of 65 million years ago). The massive loss of sunlight killed animals and plants, and fungi inherited the earth. Remember that mycelium grows under the ground and it has lots of associated bacteria. One might even suspect that man evolved from this fabric, since interestingly enough the biology of man and fungi have many connections.

Today many biologists claim we are in the sixth extinction, with 30,000 species lost each year. In another 100 years more than one third of our known species will be extinct, perhaps including humans. Great minds give us advice on how we might turn this trajectory around. Water conservation and diminishing our carbon footprint are top priorities in changing this predictive paradigm. Stamets might say that some of the secrets lie in the fungus among us, and I think he may be right. Any errors in interpretation of Stamets’ presentations are my own, and I highly recommend watching his lectures for yourself online. They are most stimulating!