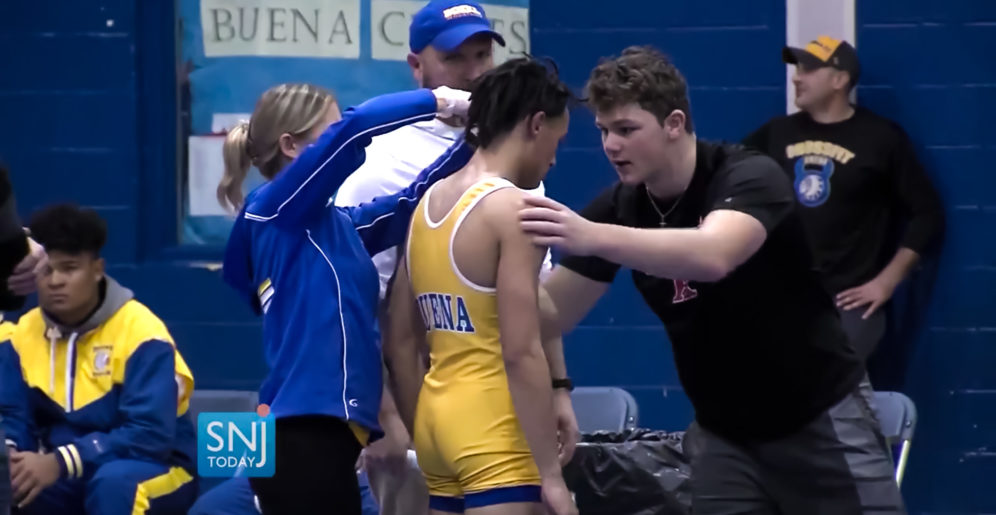 This story is being republished under a special NJ News Commons content-sharing agreement related to COVID-19 coverage. Link to story: nj.com/highschoolsports/2021/02/wrestling-ref-in-dreadlocks-shearing-incident-sues-njsiaa-over-suspension.html

Embattled wrestling official Alan Maloney, who is serving a two-year suspension from the mat after he instructed a mixed-race wrestler to cut his dreadlocks or forfeit a match in 2018, is seeking legal action against the New Jersey State Interscholastic Athletic Association.

The NJSIAA and the New Jersey Division on Civil Rights barred Maloney from officiating events for the 2019-20 and 2020-21 seasons after his decision ignited a national firestorm.

Steve Goodell, the NJSIAA’s chief legal counsel, announced the lawsuit to the association’s Executive Committee on February 11, and said, “We will be reviewing that lawsuit, answering it and defending it over the next period of time.”

Maloney produced the lawsuit, filed in Atlantic County Superior Court, on January 26 and is seeking $100,000 in lost wages, according to the Philadelphia Inquirer. The next day, Commissioner of Education Angelica Allen-McMillan ruled in favor of the NJSIAA in a separate, administrative action that Maloney sought against the NJSIAA, Goodell said.

“In that administrative action, the Commissioner of Education ruled in our favor and determined that the NJSIAA had granted Mr. Maloney due process and the NJSIAA had jurisdiction and its decision was not arbitrary,” Goodell said. “If Mr. Maloney chooses to appeal that, his appeal is to the appellate division and he has to file it within 45 days.”

On December 19, 2018, Maloney instructed Buena wrestler Andrew Johnson to cut his dreadlocks or forfeit his match in a duel meet against Oakcrest. Maloney, who had a history of alleged racist behavior before the incident, was sidelined by the NJSIAA the next day, pending investigation, before being barred from officiating events for two years.

Johnson elected to have his dreadlocks cut off before the bout and won in sudden overtime.

Maloney will be required to complete implicit bias training before he’s eligible to be reinstated in the 2021-22 season.

A former district and region champion at Edgewood High School (now Winslow High School) in Camden County, Maloney became an active member of the Southern Chapter of the New Jersey Wrestling Officials Association in 1976 and made a major impact on the state’s wrestling scene. He’s officiated in the state championship finals nine times; only two other active referees have made more appearances, according to the 2017-18 NJWOA roster book. And Maloney has served in a variety of leadership positions, including cadet supervisor, training new refs.

His career, however, has included controversy. In 2014, Maloney was accused of kicking an 11-year-old mixed-race wrestler from Jersey City during a tournament in Paulsboro, according to a police incident report obtained by NJ Advance Media. The boy’s mother said the kick was malicious, but others claimed Maloney was simply trying to move back spectators during a match. No charges were filed.

A month after the Buena incident, Roy Dragon, the state’s wrestling rules interpreter, sent an e-mail to referees across the state with instructions about what type of hair must be contained in a legal covering. The message included pictures, one of an unidentified black person with what appeared to be short, braided or dreadlocked hair on the top of his head, with closely shaved sides.

That information, however, contradicted the way the rules are interpreted by the National Federation of State High School Associations, which makes the regulations. Elliott Hopkins, the director of sports for the NFHS, said the hair depicted in the photo would not require a legal hair covering.

If a wrestler’s hair in its “natural state” extends below the earlobe on the sides or touches the top of a normal shirt, it’s required to be secured in a legal hair cover, according to the NFHS. In addition, if the hair is longer than allowed, it must be contained in a legal hair cover that is attached to the ear guards.