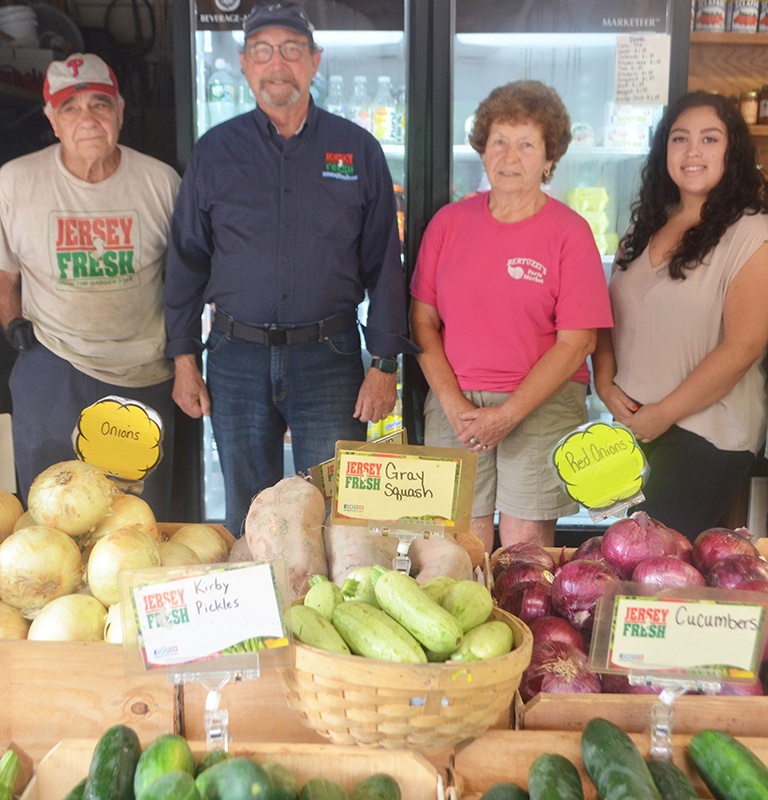 Secretary Fisher with Bertuzzi Farm Market owners Joe Jacobs, at left, Caroline Jacobs, and last year’s winner Melissa Garcia, at right, who chose to use her $500 gift card at Bertuzzi’s.

To participate in the 2021 contest, share your favorite photos of Jersey Fresh farmers, farms, markets or produce with the hashtag #JerseyFreshisCOOLER on Facebook, Twitter, and Instagram. The grand prize winner will receive a custom Jersey Fresh YETI 75 Quart Cooler. The contest lasts until September 7, 2021.

“#JerseyFreshisCOOLER is a contest for the fans of Jersey Fresh to get involved and promote the amazing and wonderful crops that are grown here in the Garden State,” Secretary Fisher said. “We encourage everyone to submit their entry and compete for some cool stuff.”

Garcia’s winning photo featured the Cervini family’s self-serve produce stand, located outside of Vineland that sells a variety of produce, including tomatoes, cucumbers, and peppers. Garcia, an architectural designer, has used agricultural settings for family and individual portraits, animal photography, and architecture

“I have always enjoyed using farm locations for many of my photos,” Garcia said. “They bring about a natural atmosphere that generates an authentic scene. Choosing Bertuzzi’s Market to spend my gift card was an easy decision as they have been a part of agriculture in this area for so long.”

Bertuzzi’s Market has been a popular location in South Jersey for 75 years, being open since 1946. The market is owned by Joe and Caroline Bertuzzi Jacobs, and they are in their 52nd year of running the business. They are in the process of turning over the operation to Joe Jacobs Jr. Their produce selection throughout the season includes corn, tomatoes, string beans, peppers, peas, squash, eggplant, beets, cucumbers, blueberries, watermelon, cantaloupe, blackberries, and pumpkins among others. They grow much of it on their 46 acres and selling it at the market. They also sell bedding plants, hanging baskets, herbs, fresh cut flowers, and fresh baked pies.

To find out which Jersey Fresh produce is available each week visit findjerseyfresh.com throughout the season.