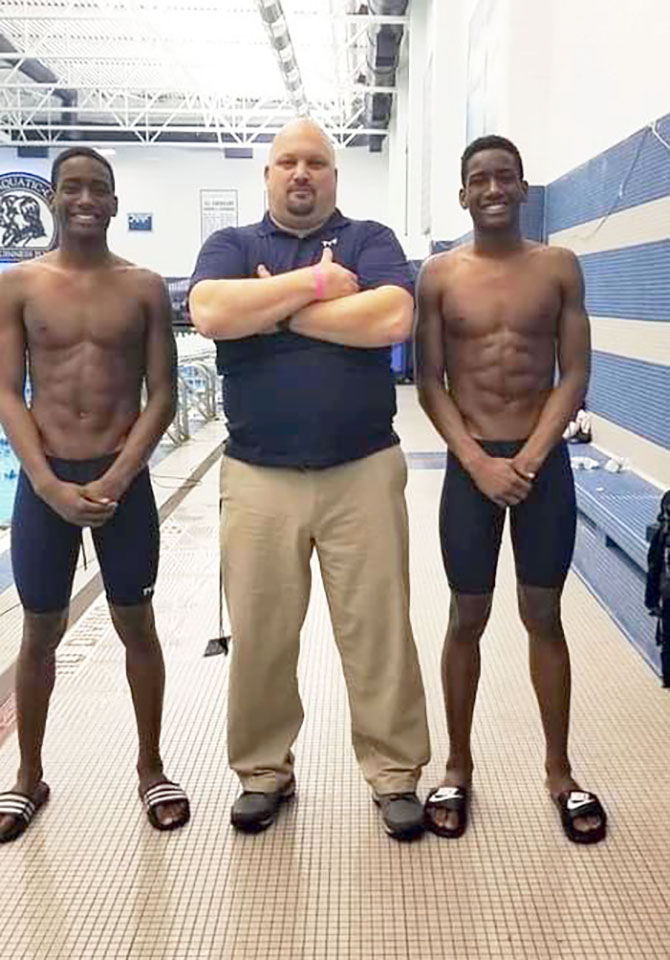 Coach Mike Blacksten said of 16-year-old twins Aaron and Reuben Williams, “They’ve been here at the Y for years. They have always been hard workers with positive personalities.” Blacksten is the head swim coach at the Cumberland Cape Atlantic YMCA, in Vineland. He continued, “Now, they’re growing into natural leaders. I suggested that they apply for the prestigious annual YMCA national leadership program. They did and were accepted.”

It is no surprise that the Williams twins were selected for this esteemed experience. Titled the YMCA Swimming Emerging Leader Virtual Academy (ELA), this includes approximately 35 students from across the entire USA. Participants are high school juniors who have competed in swimming for their YMCA at the national level. They must additionally have demonstrated a strong commitment to their team, YMCA, community, and their role as leaders. Zoom meetings, individual projects, and group projects are the basis of the ELA.

The Williams twins are ideal candidates for such a program. “We’ve been swimming at the Y all our lives,” they said, virtually in unison. Though they started at age eight, they became more serious at age 12. Reuben explained, “We’d been playing around with swimming, but we progressively put more work into it so we could become better.” Age group records, state and national championships, and other triumphs have followed ever since for these young Williamstown residents.

They play numerous other sports among their extracurricular pursuits at Williamstown High School, but Coach Blacksten is an important figure in their lives. “He was our coach when we were little. Now that he’s back at the Y, we’ve been really close,” said Aaron. “He’s always there if I need someone to talk with.”

Reuben agreed, adding, “He’s always been someone I can rely on. You can laugh and joke with him, but we know when it’s time to be serious.”

Coach Blacksten commented, “Both boys have better than 4.0 GPAs in school. I can see that their interests and accomplishments are all-inclusive. They’re typical teenagers who like to have fun, but I can also see they’re growing as leaders. Plus, they are constantly learning.” He observed that Reuben is likely to be a vocal leader than lead by example; Aaron tends to reverse that sequence. “Otherwise, they pretty much do everything the same.”

The twins credit the YMCA’s ELA with reinforcing leadership experiences and growth. Aaron observed, “I think it’s going to make me a better leader and member of the community.” His twin agreed, adding, “I’ll apply it to my daily life, using the tips I’ve learned and adding them to my skillset.”

The Vineland YMCA provides a positive environment for such advancement. Reuben explained, “When I was little, I didn’t realize how much of a community the Y is. Now, as I’m older, it’s become more like a little family. I’ve gotten to know people, and I can learn from them.”

Aaron says, “We’re always greeted with a smile at the Y. Everything runs smoothly, and everyone’s nice.”

Competitive swimming at the YMCA is held for kids aged six to 18 at the large Kontes Family Pool. Many kids invest considerable time in the sport. Aaron said, “Our parents sacrificed a lot for us to be able to swim. We really appreciate this.”

Reuben concurred, “They drive from Williamstown to Vineland six days a week, time that they could be doing something else. They always said that hard work pays off—it’s been true for me in academics and in swimming.”

Neither young man has a specific career goal in mind, but it is obvious that the sky is the limit for them. As Coach Blacksten said, “Aaron and Reuben come from a very good and supportive family. These twins are the kids that every parent looks up to!”