Dreaming of summer? Here’s how forecasters have predicted the season may unfold in our region. 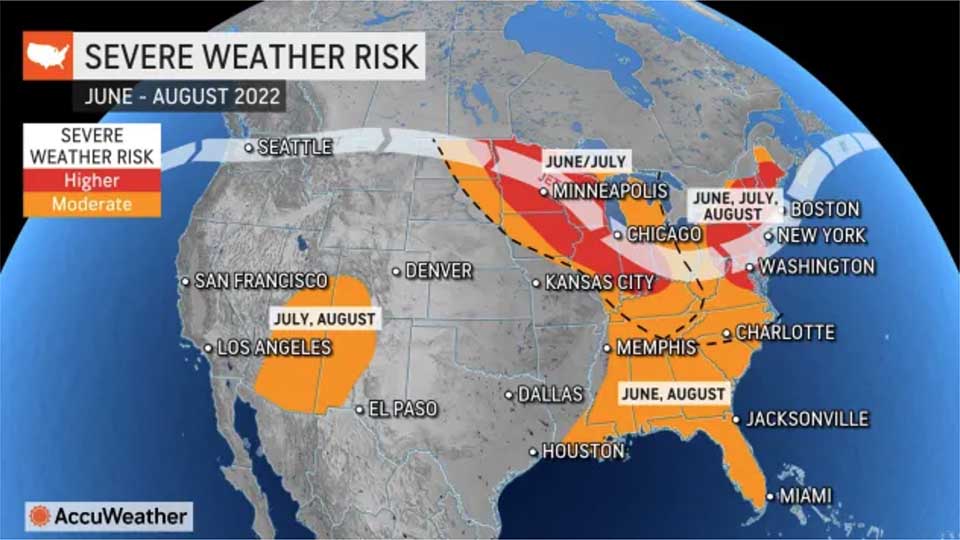 The start of summer is fast approaching, and AccuWeather meteorologists have pulled back the curtain to reveal what weather people across the country can expect in the coming months.

Summer has been on the minds of AccuWeather’s long-range forecasters for weeks, and a team of meteorologists, led by Senior Meteorologist Paul Pastelok, has put together the pieces of the weather-forecasting puzzle to create a forecast for the upcoming season.

Meteorological summer is slated to begin on Wednesday, June 1, just two days after Memorial Day weekend, which is often touted as the unofficial start to summer. Astronomical summer will commence less than three weeks later on the solstice, which occurs this year at 5:13 a.m. EDT on Tuesday, June 21.

“In the Northeast,” Pastelok explained, “we’ve had ample amounts of moisture here to start off 2022.”

This wet weather pattern is predicted to continue across the regions into the summer with frequent rain that could disrupt many outdoor summertime activities, such as doing yard work, exercising outdoors or playing golf.

“We may not have to water the lawn too often,” Pastelok said. “The thing is, you’re going to have to probably cut the lawn often.”

More moisture will also mean increased chances for severe weather from the Atlantic coast through the Great Lakes.

“We may have a lot of severe weather to deal with here in the Northeast coming early to mid part of the summer season,” Pastelok said. “All of the ingredients are there.”

The Midwest faces the highest risk of severe weather this summer, but damaging storms and tornadoes will also be possible across the Northeast throughout the summer, including the heavily populated Interstate 95 corridor.

Pastelok noted that the long-term weather pattern this year is showing some similarities to 2012, a summer that produced a disastrous derecho across the Ohio Valley and mid-Atlantic.

A derecho is a long-lived complex of thunderstorms that produces destructive wind gusts of at least 58 mph over an area spanning at least 240 miles. Wind gusts often exceed the 58-mph benchmark and the storm system is sometimes referred to as an “inland hurricane.”

The areas at the highest risk of experiencing the impacts of a derecho, Pastelok said, are the Midwest, Ohio Valley and parts of the mid-Atlantic.

While the wet pattern will fuel severe weather, it will help to limit the potential for heat waves across the regions.

Pastelok noted that although daytime temperatures will average near normal in the eastern half of the nation this summer, overnight temperatures will be well above normal. This means that there will be less natural cooling at night, increasing the energy demand during the overnight hours.

Southeast, Atlantic seaboard on alert for early-season tropical trouble: Folks planning a trip to a beach along the Atlantic coast this summer to get some relief from the heat are in luck, although not every day will be picture perfect.

“You’re still going to get a hot day here and there, and I do think it’s going to be a decent but not a great beach summer,” Pastelok said.

He added that for people heading to a beach in the mid-Atlantic or the Carolinas this summer for a seven-day vacation, there will likely be rain on two or three of those seven days.

One wildcard in the beach forecast is an early-season tropical system, which could have multi-day, far-reaching impacts including rough surf, rip currents, wind and rain.

Last summer, there were four tropical systems that spun up near the U.S. coast between mid-June and mid-July.

The 2022 Atlantic hurricane season is predicted to ramp up in late summer and early autumn in a similar fashion to the 2021 season.