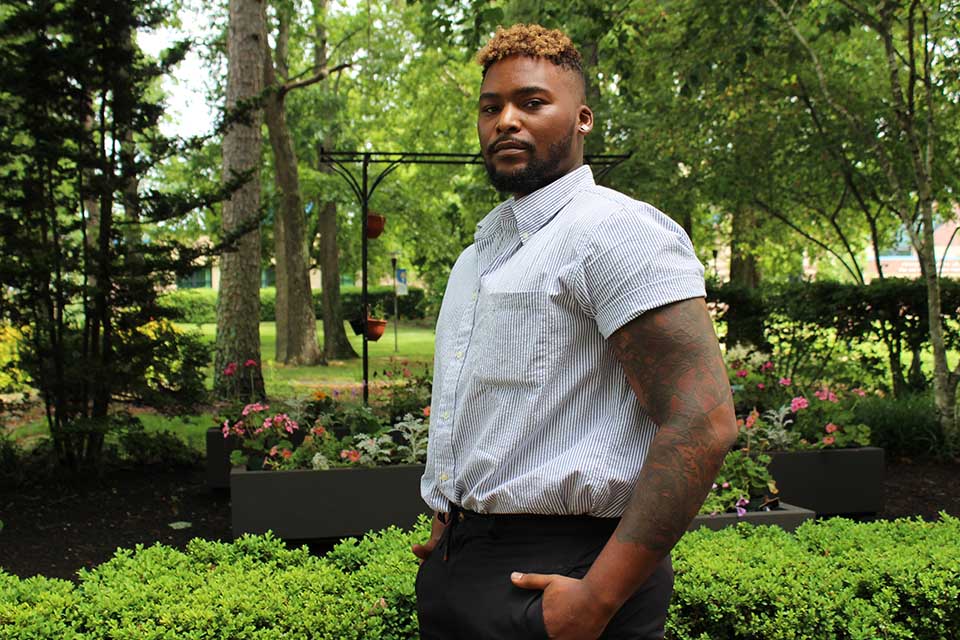 A Rowan College of South Jersey (RCSJ) student’s love of horror and true crime stories has made him a force to be reckoned with in the podcast arena. Earlier this year, Andre Matthews’ Bruh Issa Murder program reached No. 1 on cosmopolitan.com’s “The 40 Best True-Crime Podcasts to Listen to in 2022.”

Matthews’ podcast gives him and his co-hosts an opportunity to shed light on crimes that take place in disenfranchised communities and are peculiarly hidden away from the general public. “We cover cases that aren’t getting enough attention,” said Matthews, a self-professed true crime nerd. “We also incorporate highlighting different social issues involved in that.”

Matthews, a sophomore, has been a fan of horror since he was a kid, and his favorite horror flick was the original Candyman.

“Candyman terrified me because I was like, ‘Oh no, they’re in the ’hood now and I live in the ’hood!’ It seemed too real because I grew up in Philly and it looked like my neighborhood. And—I saw bees sometimes,” he said with a chuckle.

As he got older, the journalism major began listening to true crime podcasts and became more interested in people’s real-life stories rather than fictional tales. After a while, he noticed something was missing from these podcasts.

“The reason I wanted to start podcasting is … I never heard anybody talk about Black or Brown people or the issues they face when it comes to [dealing with] these crimes,” Matthews explained. “A lot of times, it goes further than just being a victim of a crime.

“[There are] a lot of systemic and societal issues that can also impact why a victim is a victim. I just wasn’t hearing that, so I was like, ‘Alright, I’ll just do it myself.’ ”

One of Bruh Issa Murder’s recent podcasts dealt with the topic of mass shootings titled “Does America Have a Mass Shooting Problem?” The online discussion with his co-hosts included statistics and a conversation about how—in their well-researched opinions—they affect communities of people of color more than Caucasian communities in the United States.

“The effects gun violence has on Black and Brown communities permeate through generations,” said Matthews. “Black, Indigenous and People of Color (BIPOC) communities are disproportionately impacted by gun violence and mass shootings. Whenever these shootings happen in these neighborhoods, you never hear people say, ‘I never thought it would happen here.’

“These communities don’t get the same treatment by the media or the resources needed to pick up the pieces. That trauma isn’t healed. It festers and transfers to the next generation.”

Matthews, who served in the Army National Guard as an 11B-Infantryman for eight years after graduating from Delsea Regional High School and the Gloucester County Institute of Technology, shared his thoughts on how the gun problem can be solved.

“The solution I proposed was common sense gun laws, heavy background checks and getting assault weapons off the streets,” he said. “If you’re shooting deer, you don’t need an AR-15. Take it from someone who’s trained in using them. You don’t need it.”

In addition to uncovering these hidden stories, Matthews has also taken the time to reach out to some of the families of the victims whose cases haven’t been solved. “I did interviews with different families and, for the most part, they find it really cathartic when someone from outside their family and outside their community [shows] they care.”

Although Matthews created the podcast, he enjoys having a diverse ensemble of co-hosts who express their thoughts and gather information to share with the show’s listeners. At the end of each program, he also plays music from an unknown artist to give them some shine. His favorite part of the show is conversing with his cohorts. “When I get in the virtual studio with my friends, I kind of just forget that I’m doing a podcast.”

Bruh Issa Murder is garnering notoriety for being one of the most important true crime podcasts on the scene. In addition to the No. 1 ranking it received from cosmopolitan.com, refinery29.com highlighted the program on its website and harpersbazaar.com named Matthews’ show one of the best “… for the genre’s biggest fans.”

“I freaked out,” said Matthews when he learned of his top ranking. “We look at the analytics … and we see the numbers of how many people were listening. But when we get actual tangible recognition, it’s like ‘Oh, people are listening!’ ”

He was so elated, he told his professor, Dr. Renee J. Post, about the news. “Funny story,” said Post, RCSJ associate professor of communications. “Andre was taking my publication class in Spring 2022 and he was waiting outside the lab for me to unlock the door and start class. As we were entering the lab, I asked him how he was doing and he responded, ‘Great actually.’

“Then he told me all about his podcast. I was very excited for him and intrigued [by] the focus of his podcast. He was beaming during the entire class because of his accomplishment.”

“She was giddy when I told her the news,” Matthews, who learned to recite the Greek alphabet after watching Percy Jackson movies, added. “She was like ‘I didn’t know you had a podcast, and I didn’t know it was that good!’ ”

“Andre is a very quiet student but very talented and knowledgeable,” the professor said. “Andre thinks outside the box. He is committed to focusing on the bigger, national issues in journalism and his design elements are sound, but also creative.”

Post’s genuinely positive reaction to Matthews’ successful podcast is one of the reasons why he is glad he chose to become an RCSJ student. “It’s been great. What really drew me in was that people are not only willing to help, but excited to steer you in the right direction or the right person to talk to.”

Matthews also spoke about the influence the college has had in helping him develop his show. “Shout out to Dr. Post. My journalism class really helped me hone my writing skills when it comes to my podcasts,” he asserted.

“The one-on-one time that you’re allowed to get with the professors here really helped me out—not only with my grades, but with hobbies I do outside of school. I think that’s a real RCSJ Cumberland experience.”

Get the education you need to Find Your Fit in Journalism at RCSJ. Visit RCSJ.edu/CCPA to view related majors.