“Nature abhors a vacuum,” said Aristotle—and a pair of nuthatches building their nest in a deserted mailbox. 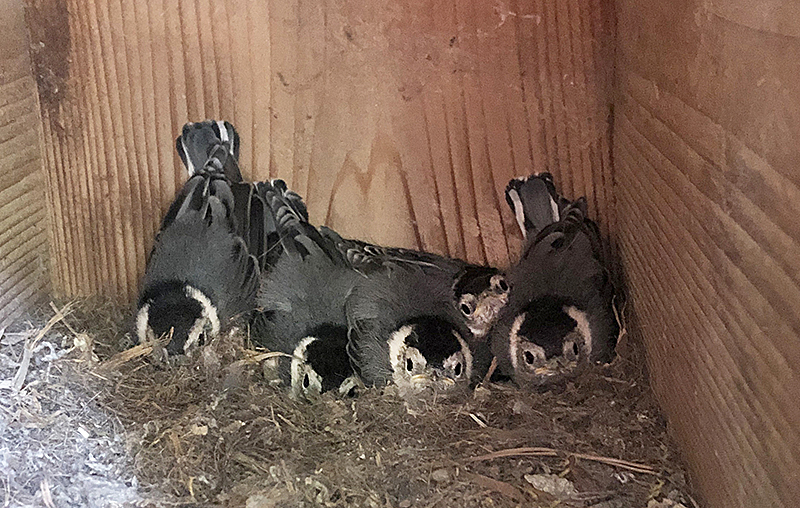 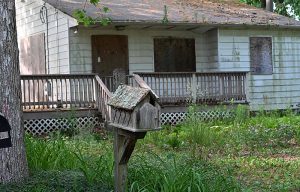 On our daily morning walk we pass a house that is abandoned—boarded up and hauntingly lonely. In this emptiness the mailbox is no longer purposeful. But wait, a white-breasted nuthatch descends into the box from a nearby white oak. “A nest, a delivery box,” I think, humoring myself. When the adult flies off I peer into the cavity of darkness and squint to see. My handy phone light allows me to make out five little faces‚ nuthatch chicks, each one more endearing than the next. In the absence of tenants, a void is filled. “Nature abhors a vacuum,” I muse.

The house has been vacant for a number of years, but likely not the mailbox. The oak trees that surround the abode are not trimmed or sprayed. Caterpillars and other insects are abundant in this oasis. Using my vehicle as a blind I watch numerous caterpillars, a live moth, and what appears to be a carpenter ant dutifully delivered to the nest. At about four-minute intervals the parents alternate in bringing meals. The young are nearly ready to fledge and they are consuming their insect diet with great frequency.

At one point an adult seems to pluck lichen from the rooftop of the box and feed it to a chick who has braved coming to the opening. In order to accept the parental passage of food the chick must cling to the interior of the door above the floor. Achieving this milestone tells me fledging will happen very soon. After emerging from the egg the young remain in the nest for just two weeks. Nuthatches have only one clutch per season, so there is little room for error. 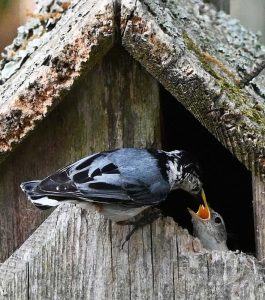 Males and females make monogamous bonds and will remain paired beyond the mating season. Sometimes mates are retained for successive seasons. The male is the dominant bird, pushing the female aside when competing for food. They have a rather elaborate courtship that involves the male presenting the female with a tidbit. This is common to many songbirds, denoting “I’m a good provider.” The female might reject food that is not prepared before serving.

Observations by amateur ornithologist, physician, and nature writer Lawrence Kilham included a male having to take a caterpillar to a crevice and pierce it several times before presenting it again to the female who then finally accepted it. The female is presumed to be schooling her prospective mate on how their chicks’ meals are to be offered, much like sending Dad back to the grill when a steak is too rare.

Kilham studied pair bonding and relayed their “hit-tuck” note exchanges through fall and winter. “Much of the answering by the two birds is irregular, for one may be feeding while the other continues calling alone. A fast rate of exchanges is 30 a minute, but this rate is seldom maintained. The term intimate is appropriate as these notes reflect the close pair bond of a well-established pair.” He theorized that the note exchanges help the birds to keep track of one another as they circle tree trunks. Because of the calls’ variations he believed they also denoted mood and conveyed information.

In breeding season males have a courtship song and do a lot of bowing when feeding a female prior to nesting. Males will actually sing hanging inverted at nesting holes and swing into an upright position in silence. Sometimes they will “sweep” the nest’s entrance with an insect in their bill. It is believed that the chemicals released from a crushed insect may repel predators or specific insect pests. Males will also awkwardly crane their necks, fan their tails and dance bizarrely when calling. Kilham identified specific calls as indicative of various levels of sexual interest and excitement. Evidently the female can watch such performances for six to eight minutes at a time in a hypnotic state of attentiveness. When she is accepting the male’s advances she will swing her head back and forth in a pendulum fashion.

Males and females are sexually dimorphic. Males have a black cap and rusty rear from vent to covert feathers. Females have a gray cap and lack the patch of color, with the frosty white extending from cheek to coverts. Both have a steely gray back with a thin white wingbar along the coverts. 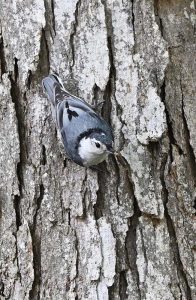 They are year-round residents in every U.S. state, with a range extending into southern Canada and interior Mexico. Of the four nuthatches in the United States the white-breasted are the most widely distributed. Conversely the familiar red-breasted nuthatch’s range is extended by its winter habitat while it is much more limited during breeding. The pigmy nuthatch is confined to western states. And the brown-headed nuthatch is primarily a resident of the southeastern U.S.

What about those oaks around the nuthatches’ delivery headquarters? Oaks support 534 species of butterflies and moths and 29 species of birds. Acorns feed numerous animals, including squirrels, deer, mice, turkeys, ducks, and jays. So these nuthatches are nesting right in the middle of a food court, a true bonanza. There are caterpillars galore for their chicks, and seeds in the fall and winter.

Sadly oaks, a top supporter of wildlife, are in severe decline. There are 50 percent fewer oaks in eastern forests than there were 100 years ago. The clearing of land for development, the harvesting of cordwood, and disease—all imperil our oaks. These trees are so important that there is an expression among naturalists: “When is the best time to plant an oak? One hundred years ago but today may have to do.”

This pair of white-breasted nuthatch transfers most food with a specific routine. The adult flies onto the trunk of an oak tree about two feet from the box, descends head first, hops onto the roof, surveys the surroundings, and then flits onto the opening of the door before entering. Nuthatches maneuver on a tree’s trunk, creeping headfirst, upwards and sideways. However their preference in surveying for food is to work a tree’s trunk from top down, unlike a brown creeper that will only work upwards. Not only do they survey and capture their meal, but they will also hide seeds in the bark, covering them with lichen, moss, or snow. Their name is derived from their opening of seeds, or “hatching” the nut.

The white- and also red-breasted nuthatches are cavity nesters. The white-breasted nuthatch has a marked preference for deciduous forests whereas the red-breasted tends toward conifer habitat. In the northeastern United States we see red-breasted in deciduous forests as well. These birds have a distinctive straight bill much like woodpeckers and they perform limited excavation of cavities for nesting. They share a similar flight pattern with woodpeckers—an undulating flight, a burst of rapid wing beats, then tucking their wings tight to their body on each undulation, thus pumping their way through the air. They do not use their tails propped against trees like woodpeckers. These behavioral characteristics help to make identification distinctions in the field when lighting is poor or quick glimpses are the norm.

White-breasted nuthatches are very typically found in a mixed-species flock outside of breeding season, forming in late summer. There have been many studies of mixed flocks and their purpose. The most common assumption is that there are more eyes to look out for predators. Additionally, by gathering with other species, each type doesn’t have as many competitors for the same food resource or preference. There are also more seekers to find food sources. Furthermore, some birds, like titmice and chickadees, are especially good sentinels, alerting others to danger. In fact in observations where titmice are not present, nuthatch are more wary and less likely to visit feeders. The titmouse seems to be instrumental in forming flocks and its constant leaping and hovering assists in scaring out insect resources. Three commonly cited companions in a flock including nuthatch are chickadees, titmice, and woodpeckers.

I reflect on the little faces that peered out at me as I investigated their delivery box. And I think about how they will be gone in a day or two. And like so many people before me I marvel at the wonders of nature and of flight. n