John and Yoko’s story was expressed in art. 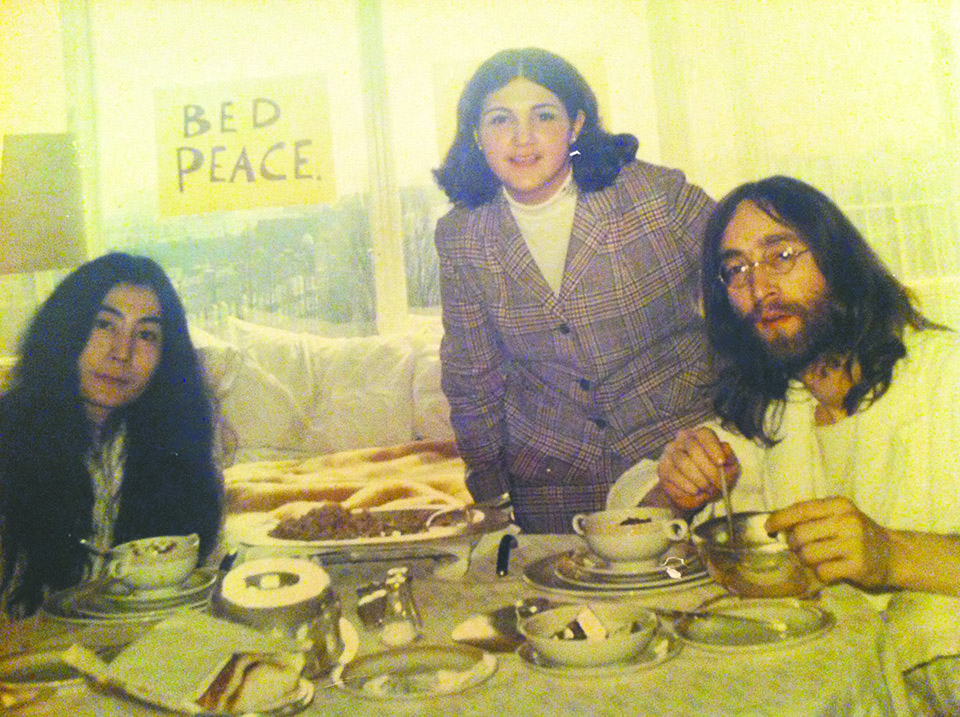 The 1969 Amsterdam bed-in at which New Jersey Casino Control Commissioner Alisa Cooper interviewed John Lennon and Yoko Ono concluded on March 31, but its details, sounds and images would echo throughout the remainder of the year and into subsequent decades.

A month after the bed-in, Lennon recorded a musical account of his and Yoko’s wedding and Amsterdam experience as the next Beatles single, “The Ballad of John and Yoko,” which includes the lines, “Drove from Paris to the Amsterdam Hilton, talking in our beds for a week.” Cooper mentions that “this, of course, is my favorite song…just looking at this whole episode of something that I did.”

A film shot during the couple’s bed-in would materialize five months after the Beatles single was recorded. According to Mark Lewisohn’s The Complete Beatles Chronicles, “In keeping with their own drive to record, film, or in some way conserve their activities for posterity, the Lennons…[had] arranged for assistants to film the week-long event [in Amsterdam].”

The resulting documentary, Mr. & Mrs. Lennon’s Honeymoon, which John Robertson assessed as “slightly shambolic, but it caught the flavor of the moment” in his The Art and Music of John Lennon, was first screened on September 10, 1969 at the New Cinema Club at London’s Institute of Contemporary Arts. According to the Beatles Bible website, the color documentary has a running time of 40 minutes and consists of “scenes from the city intercut with Lennon and Ono singing ‘Hair Peace, Bed Peace,’ followed by scenes of the couple sleeping and reading newspapers…[and] interviews of Lennon talking into the camera.”

Cooper says she never bought a copy of John and Yoko’s first avant-garde album, 1968’s Unfinished Music No. 1: Two Virgins, and doesn’t think she has heard it. When asked if she had ever heard any of John and Yoko’s experimental albums, she responds, “I’m going to say yes because, swinging over to 1969, the interview, that was one of the things Yoko wound up discussing…I remember Yoko talking about experimental art and a little bit of the music.”

John and Yoko’s days of audio verite would come to an end by the mid-1970s when the couple intentionally faded from public view. After a half-decade of semi-seclusion, they re-emerged with a collaborative album, Double Fantasy, released shortly before Lennon’s murder on December 8, 1980.

Cooper recalls that evening when reports of Lennon’s shooting began to air on Monday Night Football. She had continued to follow her favorite Beatle’s career and word of his death resulted in a flashback not only to her 1969 interview with him but all that he had meant to modern music. “I was just numb,” she recalled. “I was like, ‘This can’t be happening. This is John Lennon, one of the Beatles, a world-famous musician who has had such an impact on music of that time.’”

Since interviewing the Lennons in 1969, Cooper pursued a varied career, graduating from the University of Maryland with a degree in Music Education, establishing herself as a performer, being elected to the Atlantic County Board of Chosen Freeholders and serving as vice chair of the New Jersey Casino Control Commission.

During her years as a performing musician, Cooper witnessed the continued reverence accorded to the Beatles. She says that when playing casinos, “Somebody would always come up and say, ‘Can you do “Something?” Can you do “Here Comes the Sun?” ’ Whatever type party that I did or where I performed at, there was always some type of request for a Beatles tune.”

Cooper’s excitement in interviewing John Lennon and Yoko Ono at the Amsterdam Hilton does not seem to have waned over the past 50 years. So, in hindsight, what was it about the Beatles and their music that makes them so well-loved, so universal and so unchallenged?