RCSJ theater student looks to a future on Broadway. 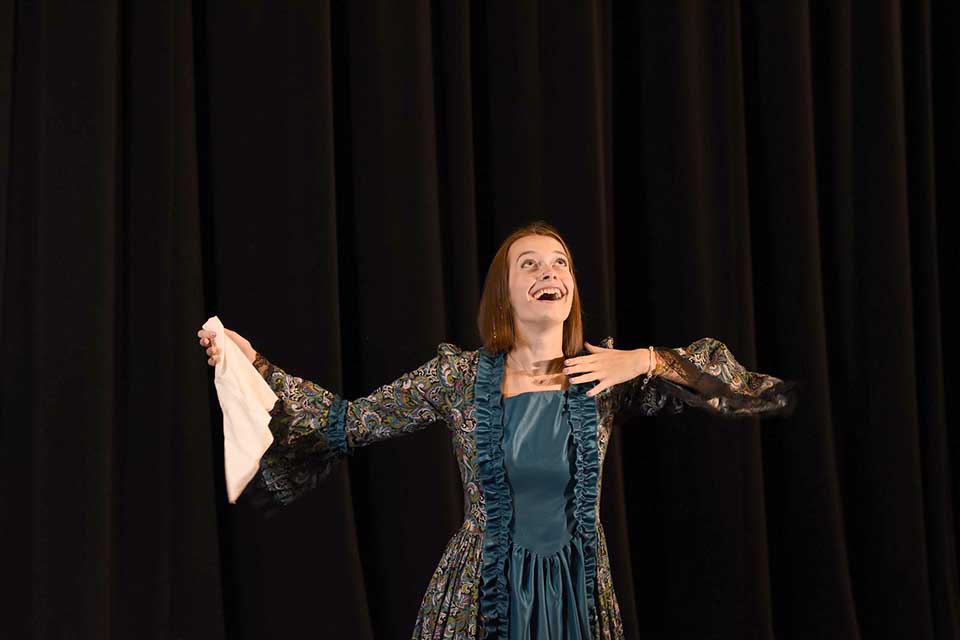 Jessica Fowler, a sophomore theater major at Rowan College of South Jersey (RCSJ), has performed in multiple plays on stage at the Luciano Theater in the Guaracini Performing Arts Center, on the Cumberland campus. In a couple of years, after she earns her bachelor’s degree, Fowler plans to play a major role on Broadway.

Fowler describes herself as an astute problem solver, which is a great trait for a stage manager to possess. “I work very well under pressure and I’m, like, very high energy,” she said. “Even if I don’t know something, I’ll figure it out.”

The 21-year-old has been acting since she was five. Fowler played the role of Zuzu at Cumberland County College (now RCSJ), in It’s a Wonderful Life.

“She was a quick study and easily won the hearts of the cast,” said Deborah Bradshaw, director of Performing Arts at RCSJ. “She was adorable and always knew when it was time to be onstage and where to go.”

In Fowler’s nearly two decades of acting on stage, there is one performance that stands out to her. “My favorite role was when I did August Osage County here,” the actress stated. “I played Jean and Deb Bradshaw directed it.”

Jean is described as “sullen, quirky, and desperate for an escape from her difficult family” in one character analysis. According to Fowler, the 14-year-old Jean had a penchant for participating in illegal activities and spoke like she had the mouth of a sailor. “It was really challenging to play something with such mature content—and I liked that challenge,” Fowler admitted.

The role unexpectedly became even more demanding for the actress after she suffered, then overcame, a devastating personal tragedy during the process. “I was also extremely proud of myself because while I was working on the show my father died suddenly,” Fowler disclosed. “Everyone involved in the show gave me so much support and showed me how to channel the emotions I was feeling in a healthy way.”

Her performance was widely recognized by those in the theater community as superb, so much so that she was nominated for a Perry Award for Outstanding Youth Actress by the New Jersey Association of Community Theatres. “Although she did not walk away with the trophy,” Bradshaw said, “she certainly won our hearts.”

The performing arts director has enjoyed having the opportunity to guide Fowler as a director and as her professor. “Jess is the student you want in your program,” Bradshaw said. “She is always prepared, enthusiastic and committed to the show or scene we are working in. She has helped make this Zoom/online pandemic class time a joy for me.”

For Fowler, the feelings are mutual. “I love Deb. I trust her so much,” the theater major said. “She just knows what she’s talking about and she gets straight to the point. She doesn’t sugarcoat things and I appreciate that.”

According to Fowler, “She puts the best productions together. They’re top tier!”

Interestingly, Fowler is following in the footsteps of her two older sisters who also performed at and graduated from the college. Amanda Fowler-Wurtz is currently a theater teacher at Pleasantville High School and Brooke Fowler is a performer at Walt Disney World.

When asked if she always wanted to be like her big sisters, Fowler said, with a smiling eyes, “Yeah, you could say that.”

Fowler, a member of the Phi Theta Kappa National Honor Society, appreciates her experience at the college, a place that has become a sort of home away from home. “Yes, I do enjoy being a student at RCSJ,” she declared. “I really like the Luciano Theatre. It makes me feel safe.”

“I like all the people and everyone’s really nice to me,” Fowler continued. “I feel like I can learn and grow without feeling embarrassed to make mistakes. That just makes me grow even more because I can take my acting as far as I want.”

Fowler, who jokingly said she has “grandma hobbies” like crocheting, believes that community theater is a valuable tool to help people overcome the doldrums of the pandemic.

“It’s been hard during this whole COVID thing,” she admitted. “I think that having an escape for people to go and see a show is just really something special. It’s really important for the community to have theater, especially now. I think it’s pretty essential.”