Fostering has given this mom—and dad—the family they’ve always wanted. 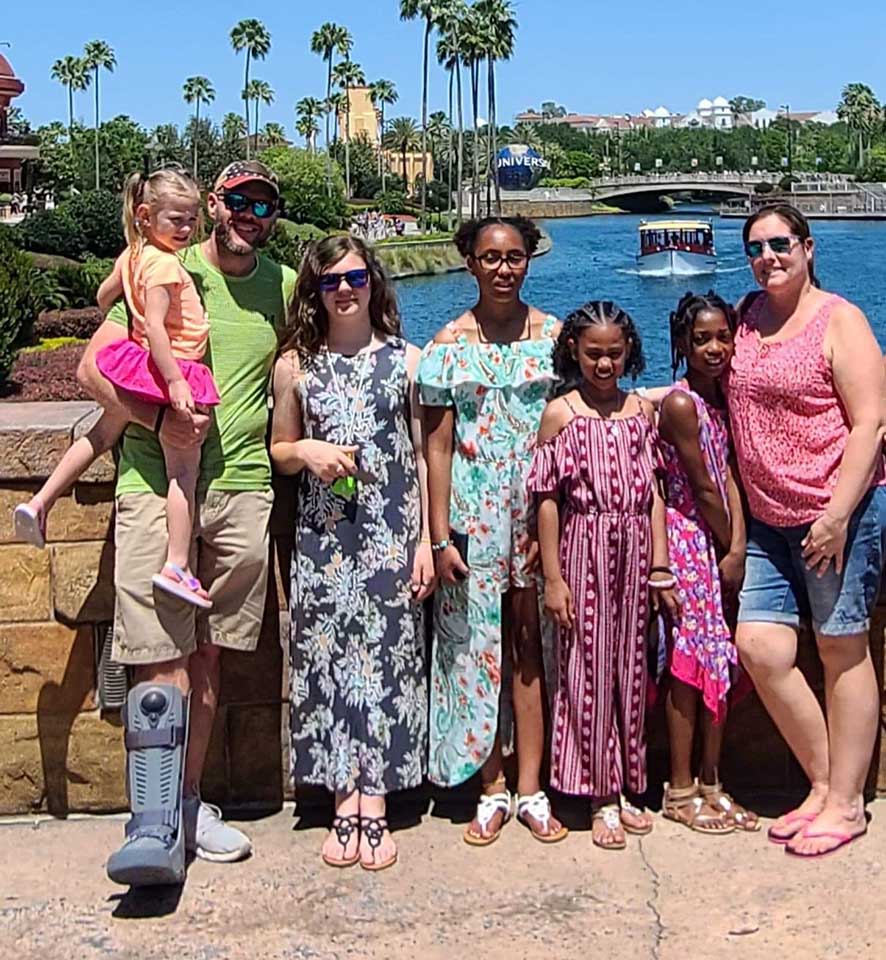 Crystal Upham doesn’t like the hype around Mother’s Day. Forget the roses and the fancy steak dinner. Give her a few thoughtfully written sentences in a homemade card, a hand-drawn Crayola work of art. It’s all she needs.

Crystal, 46, has her advanced degree in mom-ology, you might say. The Port Norris resident, with her husband Mark, have fostered dozens of children over the 10-plus years they have worked in the system. Today, they are the proud parents of five adopted girls. The process was far from easy.

It started with bitter disappointment.

“We wanted a family, and we did in-vitro (fertilization) several times,” Crystal said. It was a painful process that was ultimately unsuccessful.

In 2009, a friend suggested another option: Start fostering children through the state Department of Children Protection and Permanency (DCPP). That year, the Uphams filled out the forms and waited a year to get licensed.

Boom. Their home in Port Norris began to fill up with the sound of children, exactly what they wanted. And though they could not have known it at the time, it ultimately led them to adopt the five little girls.

More than one child was always part of the plan, said Crystal, who was raised by her grandparents, though she does have siblings. “It was lonely and boring,” she said. Meanwhile, her husband Mark was one of seven children, and he was accustomed to the sound of joyful chaos.

Fostering children means allowing the state to examine every part of your life, some of them deeply personal. For every child in the household over 30 days, expect a surprise visit from the child’s case worker, who will root through the house to make sure the child always has what he or she needs.

They will look in your fridge. Is there enough food for the kids? They will flush your toilet. Are basic sanitary needs provided? That, and much, much more.

“My fridge (was) always jammed. You’re being judged. (They are) just making sure food is there and they have hot running water and clothes,” Crystal said. “It’s just mind-boggling that they would come in and turn your water on and flush your toilet. But they want to make sure they’re putting them in a good situation and not a bad one.”

Many of the fosters last for a short period of time, perhaps the result of a family on vacation unable to take their child out of state for a variety of reasons. Sometimes, children are taken from their parents for everything ranging from mental illness to homelessness or drugs, Crystal said.

The state will ask foster parents like the Uphams to provide a temporary home while the parents go through rehab, classes or return from vacations. The goal is always to reunite children with parents in a healthy, nurturing atmosphere.

Their first daughter, Makenzie, came to them when she was 12 days old. Their next two, who are siblings, were only four and seven weeks old when they arrived at the door of the Uphams to be fostered. They remained in the foster system for more than five years before the couple were permitted to legally adopt them. Amelia and Mia are now 13 and 9, respectively.

Crystal said the department is always giving birth parents multiple chances to get straight and earn back the right to parent their children full time. The DCPP might determine that the kids can be adopted, but then a judge could step in and rule that the parents need to be given another chance.

“The division works hard to reunite the parents with kids, so they were looking toward reunification, but it just never happened,” Crystal said. “They said, ‘Well, maybe they will be able to turn it around now.’ Then she (their mother) moved out of state.”

It’s done “to prove that they have given them every chance. And some it helps and some it doesn’t,” she said.

Their fourth daughter, 8-year-old Nina, was only 14 months old when she arrived. They finally were able to adopt her when she turned 4. She has siblings from her birth parents, and the Uphams are quick to say they don’t hide any of that from Nina. “We have pictures of her family for her that we have put away” for her at an age when she is ready to see them.

Before they are adopted, each child is assigned a case worker and are required to make visits to their birth parents. With multiple children in the home, foster parents can expect drop-in, surprise visits from the caseworker assigned to each child at any time. It can make everyday living a little crazy, but that did not stop the Uphams from helping as many children as they could.

Child number five is Morgan, who spent two months in the neonatal intensive care unit in Vineland. She arrived in their arms when she was two months old.

“She was a premie. I thought she was going home,” Crystal said. “You literally never know until (the adoption papers) are signed,” she said.

Two years ago, Mark and Crystal Upham “closed” their house. No more fosters, just five little faces to care for every day. A house full of noise and chaos and drama.

Since that day, they have encouraged others to become foster parents, and some have adopted children of their own. It’s a gift that keeps giving.

Mark did grow up in a house full of kids but wasn’t quite ready for the number of girls in his home.

“I have two older half-sisters who didn’t live with my parents,” he said. He also had as siblings four brothers and a sister who was youngest and by far the toughest. But that didn’t prepare him for five adopted daughters.

Once upon a time, he may have wanted to add a boy, but thinks twice about that now.

“I would almost feel bad putting a boy in this situation, having five sisters. But yeah, I probably wouldn’t have it any other way,” he said.

Driving back from vacation with Mark, Crystal pauses her conversation to ask her girls if they want to jump in the pool when they return home. Home: Just their own, no strangers barging in.

“… it really is an amazing journey,” Crystal said. “I’ve been out and have seen kids that we fostered and they’ve remembered me. We did a lot of good and there’s a lot of good to be done.”

“If it’s not hard, is it really worth it?” she asks. “If (the state) makes it easy, (people) will do it for all the wrong reasons.”

Looking into becoming a foster parent?

Here are some of the requirements from the New Jersey Department of Children and Families:

• Be at least 18 years old. There is no age limit, but foster parents must be in “reasonable health.”

• Provide a safe environment for a child. Your home must meet basic life and safety standards, but it does not matter if you own or rent.

• Everyone in the household must work as part of a team and be involved.

For more information, call 1 (877) NJ FOSTER (653-6783). A representative will send a packet of information from the state CP&P. A home study will be conducted by the Resource Family Support Worker. Later, potential foster parents will attend an orientation and then an assessment process will begin. The state requires both the home study and pre-service training. For more information, email njfoster@dcf.nj.gov.