Four teachers share their journeys of finding life balance and peace in the martial arts. 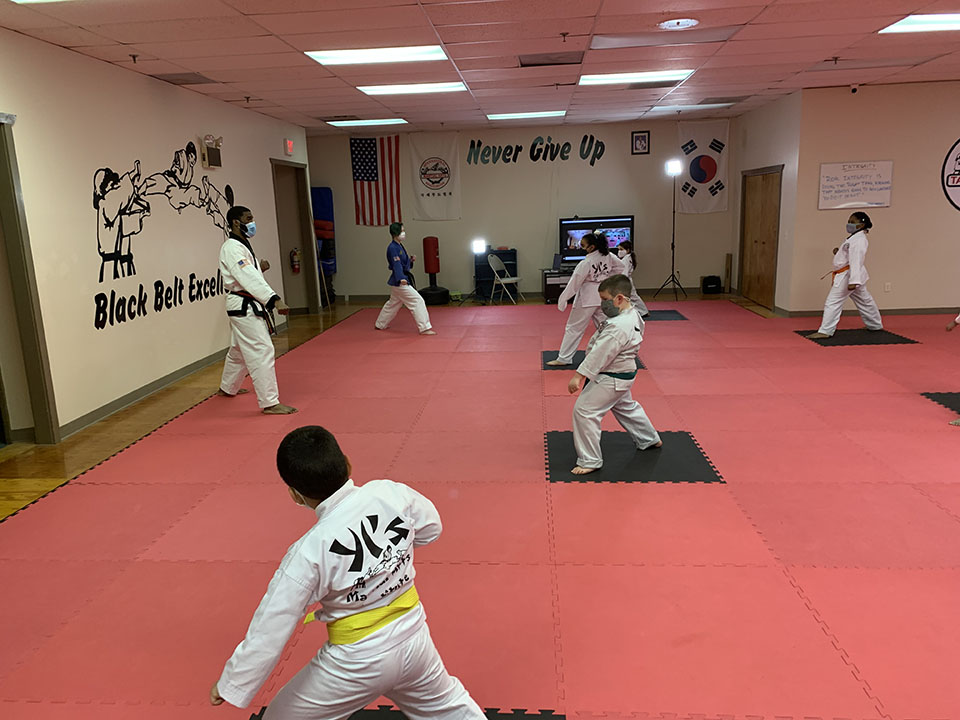 Being mindful of your health (physical, emotional, mental, spiritual) has become exceedingly important during the challenging times we face today. Cultivating healthy choices, including a balanced diet, the proper amount of exercise, and reconnecting with the Spirit within are all ways that can help people overcome the malaise that many have felt during the past year.

There’s an artform that has been taught and practiced for thousands of years that has helped its dedicated practitioners achieve a healthy harmony with themselves and their environment—the martial arts.

When people think of martial arts, they normally think of stars who defied physical reality with their movements on the silver screen. People like Jet Li, Jackie Chan, Gordon Liu, Chuck Norris, Uma Thurman, and of course, the legend, Bruce Lee.

Many can recall the classic Kung Fu flicks that used to come on every Saturday afternoon, such as Shaolin vs. Wutang, with its epic opening scene, the Five Deadly Venoms, and Master of the Flying Guillotine. A newer generation of fans have been introduced to this ancient artform through movies such as Kill Bill, the Ip Man saga, Kung Fu Hustle, and even Rush Hour.

Although these movies are entertaining and informative, to comprehend the true essence of martial arts and its benefits, one must live the life, rather than live it vicariously through actors and actresses.

In Vineland, there are several instructors who are attempting to instill the concepts of how one can uplift oneself through the honorable practice of martial arts.

SNJ Today recently spoke with Master’s Chuck Vertolli and Samuel Llabres of Yi’s Karate of Vineland, Master Eric King of Art in Motion Karate, and Sensei Felix Cruz of Cruz Okinawan GoJuRyu Karate to learn about their martial arts origins and the benefits of this ancient artform.

“I always wanted to learn a martial art, but didn’t have the means,” said Vertolli, master instructor, owner of Yi’s Karate of Vineland. (A theme of not having the means is a current that seems to run through many martial artists’ stories). “Once I had a ‘real’ job, I started training in Tang Soo Do and found it was a perfect fit. I have been training in Tang Soo Do for 35 years and I continue to learn more and grow in the art every day.”

“I needed something to focus myself and give me direction as a young teen,” said Llabres, who earned his title of Master in January 2021.

“I got started in 1973,” said King, owner of Art In Motion Karate, who lived in Los Angeles and was around five or six at the time. “My mother … called me into the front room and on the television screen, there was a trailer for where the dragon, Bruce Lee, the famous scene where he’s in a back alley, fighting guys off, and she was very excited about that. She got me poppin’ in that, and it was when I saw that … something clicked inside of me—like I was in another world. And it’s like, okay, that’s what I’m supposed to do.”

“I used to live in between a karate school,” said Cruz, owner of Cruz Okinawan GoJuRyu Karate, and was around six or seven at the time. “In the afternoons after school, they used to start teaching. I used to go and peek through the window. They used to close the curtain so I wouldn’t peek. But I was always curious, and I would peek. And I would see these people doing these flying kicks and sparring and fighting—stuff I wasn’t familiar with. That piqued my interest.” Cruz began his martial arts journey, in earnest, in his 20s.

The instructors then shared the style of martial arts they teach to students and some of the philosophy of the art itself.

“Tang Soo Do – Moo Duk Kwan Tang Soo Do can be translated as The Way of the Hand of Tang and Moo Duk Kwan as School of Martial Virtue or The Place to learn to Stop fighting,” Vertolli shared. “This is a traditional Korean martial art whose roots date back over 2,000 years. Through our training and our martial arts abilities, we strive for peace and responsibility to help others.”

“Our foundation, our primary is Tang Soo Do … Chuck Norris made Tang Soo Do a bit famous,” King revealed. “I study Kung Fu, I study Kempo, I study Tang Soo Do, I study kickboxing … and what we do here at Art In Motion, we combine everything together.”

“We’re training and teaching a style called GoJuRyu, which means hard and soft style of karate or martial art that originated in Okinawa, Japan,” said Cruz, who’s been an instructor since 1995. 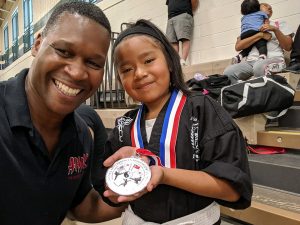 According to okinawanmartialartscenter.org, gojuryu is a counter-attacking system based on a synthesis of hard linear-type techniques with softer circular movements.

“The philosophy is a non-violent philosophy,” said Cruz, but “basically, you’re going to defend yourself when needed. You don’t use it to bully other people around.”

A common theme in modern martial arts is to not use the practice as a way to start trouble. However, if trouble does come your way and you’re honestly unable to talk your way out of trouble, an in-tune martial artist will have the tools to end the trouble, which can be quite painful for the person or persons who initially brought the trouble to the martial artist.

The practice of any style of martial art offers numerous physical benefits to a dedicated practitioner, especially during the public health emergency.

“In the martial arts, the techniques and movements require the use of all of our muscles and muscle groups, so we tone and strengthen our entire body,” Vertolli said. “We also start each training session with a good stretch to increase flexibility and avoid injury.”

“When it comes to the health aspects of karate and the martial arts, moving your body is first and foremost. It’s in the essence of all martial arts,” said Llabres, who, like the Wu-Tang Clan, mastered the secrets behind Da Mystery of Chessboxin’.

“Martial arts keep you healthy if you’re doing it the right way, if you’re making sure that it’s a daily routine,” King said. “Martial arts will sustain you; it will keep you better than you can imagine.”

Practicing martial arts isn’t considered to be a religious experience; however, it is said that one can align oneself with that still small voice that whispers ever so gently in our ears.

“I’m so closer to God because of [martial arts],” King said. “I can see where He has blessed me with health and with strength, with a sharp mind and a caring heart. Not just for myself, but more importantly, for other people.”

“Martial arts can have a spiritual quality to it,” said Llabres. “I find for myself and many others the camaraderie, positive atmosphere, and having a group of great people training together, all reaching to be the best we can be on that day, feels very spiritual to me.”

“You cannot do this sincerely and not be connected,” said King.

For these martial arts instructors, sharing their wisdom with their students is more fulfilling than breaking seven, 3/4-inch boards in a row, with their fists.

“My favorite aspect of teaching karate is that on a day-to-day basis, I see people benefit,” Cruz revealed. “The kids are benefitting from the martial arts training. I have kids that I teach, they’re hyperactive, and they have conquered that … with the practice of karate.”

“I think my favorite part is watching the development of young people, their minds, their spirit, the fact that they begin to believe in themselves and watch them grow,” said King, who, in 2022, will be celebrating his 30th year as owner of Arts in Motion Karate..

“My favorite thing is also the most rewarding, helping people change their lives in a positive and lifelong way,” said Vertolli. “Empowering them and helping them develop the strength and character to accomplish and succeed in whatever they choose in life.”

Martial arts and good health go hand in hand, but if you push a martial artist too far, your health could be in jeopardy and you could end up with a foot in your face.

However, many martial arts practitioners, through dedicated and determined practice, are able to avoid unnecessary confrontations with supreme self-restraint, by tapping into their inherent, inner strength, and live a life of peace and harmony with everyone and everything.

“Many people think of martial arts as an activity or sport and while there may be some competitive qualities to martial arts, it is much more than that,” said Vertolli. “We develop a high degree of respect and honor, self-discipline and self-control, and confidence and humility.

“We learn that we have a much higher capacity than we generally believe and that we can accomplish anything and everything we want to if we are willing to put forth the effort.”

For more information about Yi’s Karate of Vineland visit vinelandmartialarts.com and visit Facebook for Art In Motion Karate for Cruz Okinawan Karate studios.