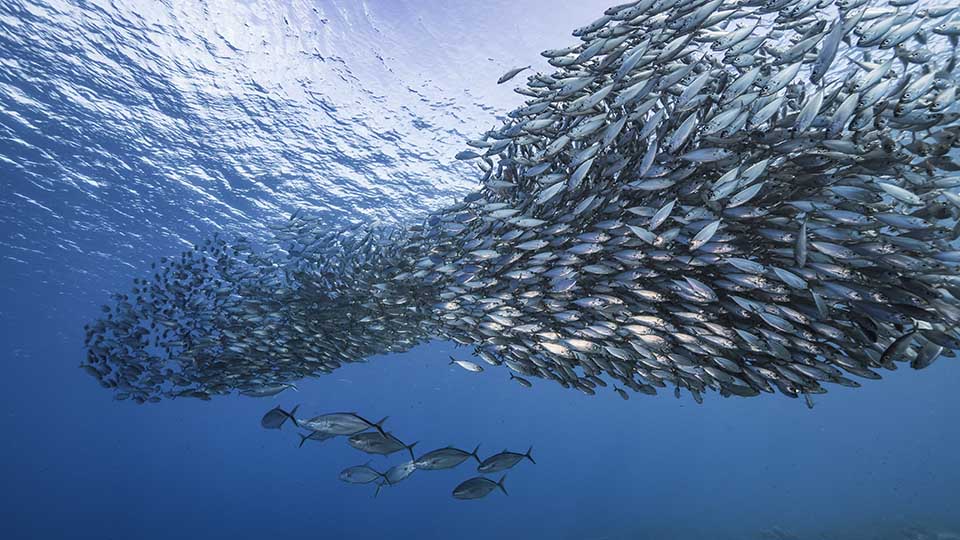 A school of blue runner jacks form a bait ball. Balls such as this will appear as one huge entity to predators. Photo: Naturepics_li
by J. Morton Galetto, CU Maurice River In 1987 I first became aware of fish and some aspects of their biological navigation skills. William Sargent had just written The Year of the Crab, one of my favorite books. In it he discusses marine animals and the advancements in modern medicine that have taken place by studying them. For instance the squid is considered to be responsible for neurological discoveries to such an extent that researchers joke that it should be awarded a Nobel Prize in science. Annually scientists flock to Woods Hole Oceanographic Institution in Massachusetts to gather squid to advance their studies. The squid’s main system is a spinal column and investigating it nearly isolates that organ.

Sargent’s book also devotes a great deal of discussion to medical discoveries involving the horseshoe crab, which we have discussed in prior articles. Sargent’s book is a marvelous read.

Fish neurons give off electrical signals, but some fishes’ ability to sense these surpass that of others. The dogfish (a small shark) can detect a flounder buried shallowly in sand, not with its eyes but by the faint electrical signals given off by the flounder. The shark’s electroreception system is keen. A series of pits in its head, called ampullae of Lorenzini, are modified parts of the lateral line system that enables the shark to perceive a well-hidden flounder. Sargent relays, “They can detect an electrical current equivalent to what would flow between the poles of a flashlight battery even if the poles were 900 miles away from each other.”

Many fish school or congregate in mass at some point in their lives—some for their entire lives—and this schooling is our topic. The eyes and lateral line system in a fish play a major role in its ability to school. You’ve probably seen the lateral line in a fish but were likely unaware of the role it plays in its swimming skills. Normally it is visible as a stripe down the fish’s side.

There are hairs in the lateral line that detect electrical pulses traveling down nerve fibers to a large pair of complex cells called the Mauthner. These cells are reticulo-spinal neurons in the fish’s brain, necessary for advancing fish escape behaviors. The lateral line senses pressure and electrical input that is interpreted by the Mauthner. If you have ever endeavored to catch a fish in your hand it is this system that allows, in a 100th of a second, the escape reflex to kick in; sensory information > Mauthner cell > motor output > escape, ta da—one for the fish, zero for you. Unless you are a shark, stick to a fishing line!

Fishes’ eyes and the lateral line allow them to navigate in unison in a group. The lateral line can detect vibrations and pressure changes in the water. Fish assemblages are broken into two groups—shoals and schools. A shoal can consist of a number of different species hanging out together in a loosely knit group. But a school is a highly structured and coordinated ballet of movement—a group of individuals that can synchronize their movements.

The swirl of a large group of forage fish like anchovies is beyond amazing. Think of it like a murmuration of starlings or blackbirds, with individuals the shape of underwater torpedoes. Then envision that they can move in a massive amoeba-like line, or the collective can change shape into a massive sphere called a “bait ball,” or even a tornado, all to confuse predatory fish. Further envision them moving at speeds in which your eye can’t detect individuals but just a massive “oneness.” Some movies of bait balls make me wonder if they might actually form a perfect sphere. This level of synchronization is mesmerizing.

Seasonally, sea currents are laden with more nutrients than at other times. Predators often congregate in staggering numbers to feed on the smaller fish that rely on this plankton-rich opportunity.

The appearance of “oneness” can confuse predators into briefly perceiving the ball as a huge object versus a collection of small delicacies. This is one advantage of hanging out in a pack. However, eventually predators get wise and attack. When the escape reflex is triggered in a group, the surprise element of the “oneness” exploding in many directions saves lives. Individuals will be picked off but others will escape.

As with colonial birds, by hanging out in a flock each one’s chances of survival are increased by being one among many. A single fish can be easily captured, whereas the confusion of many is advantageous to survival. There are also a lot more eyes to react and alert to danger and not all individuals let their guard down at the same time.

Positioning in a school is important as well. Lead fish are in greater danger of being picked off by predators. But there is an oxygen advantage to being in the lead. Fish that travel on the edges of the school are normally weaker and have more health issues, and also are more likely to be caught during a feeding frenzy by a group of larger fish. An advantage to the outside placement is better access to food (Hakai Institute- Science on Coastal Margins). There are pluses and minuses to all the positions.

The lead fishes’ role is very important; they alert the trailing school to danger up ahead. As they adjust, the rest of the school must follow their cues to maintain the unit. Some researchers suggest there are also distance rules. Physics is also at play here as fish are drafting behind those in front and sense the pressure of those alongside them. Whatever the case, these are inherent genetic traits.

Let’s talk about the importance of forage fish in the ocean. When a small animal occurs in large numbers you can rightfully assume that it’s a meal item for something larger. In the case of anchovies they are one of the most important sources of food in the oceans. Humpback whales, seabirds, salmon, jacks, and an endless list of other larger fish are dependent on these tiny fish.

Some conservation organizations contend that fishing practices have put many anchovy populations at historic lows (Earth Justice). Conversely, the National Oceanic and Atmospheric Administration contends they are a smart food choice because they are sustainable and well-managed. Earth Justice reported, “In January 2018, a federal judge ruled that the National Marine Fisheries Service violated the nation’s fishery management law by relying on decades-old data and failing to prevent overfishing of the northern anchovy off the California coast. In a follow-up ruling on June 13, the judge rejected the government’s request to limit this ruling and confirmed that the Fisheries Service must implement new limits based on the best available science to effectively protect our ocean ecosystem.”

It is imperative that we use the ocean’s resources wisely and that we protect water quality. Forage fish are an important link in the continuing health of our oceans. All forage fish use schooling as a protective strategy. Large numbers are critical to the success not only of tactical schooling, but to the very survival of our oceans.