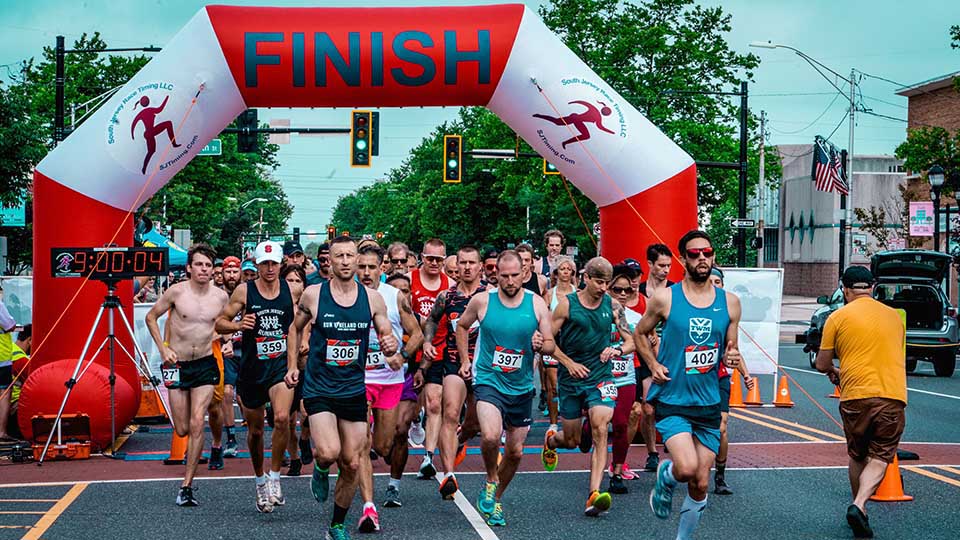 Andre “Andy” Rivera started the race with his megaphone’s blare. I was at the back of the pack with the goal to run the whole race and not die. It felt like 100 degrees on the New Jersey Motorsports Park (NJMP) racetrack. Early on an older woman passed me at a steady clip.

“Oh, I thought we were going to have a breeze,” she says amiably. She looked like she could go all day. I was wheezing and focusing on my not-dying goal. I could’ve come up with a hundred excuses not to participate in this Second Capital Race, but what I lacked in speed, I had in determination. I listened to Christian singer TobyMac as my pacesetter. It might’ve been runner’s high but more likely, oxygen-depleted delirium, but all my training runs came back to me as if in a video. Sooner than I expected, I spotted the red finish-line arch. I sprinted through, buoyed by the cheering crowd.

With Rivera’s races, he says runners can expect three things—an exciting competitive event, a welcoming atmosphere, and a benefit to the community. Each race is also a fundraiser; the NJMP race benefited the Police Athletic League. “Our events bring us closer to the people and organizations that can help us get to places where the sport and the social needs of our community meet,” says Rivera, founder and owner of Second Capital Running. In partnership with organizations, he works to do something for their mission and for the running community. That community includes a wide range of runners.

Jean Smith, the runner who graciously left me in the dust, can literally run all day. At 75, she has run more than 100 marathons. In a few weeks, she is running the New York City Marathon.

“I needed an outlet for stress,” she told me. “That was the easiest and cheapest way to do it. It was telephone pole to telephone pole, right here on the Boulevard.” Her first marathon was at age 55: “It was fun, exciting, challenging. One year my friend and I ran almost a marathon a month for a whole year.”

Her husband started running with her 10 years ago; they run together a couple of days a week. Her day starts at 3:45 a.m. and she runs for 90 minutes. After that she heads off to work full-time. She has served as principal, superintendent, and is now a teacher at Broad Street School.

“It’s an outlet for your internal emotions,” she notes. “I’m not trying to impress anybody. I’m doing it because I want to do it. It’s fun and exhilarating!” She participates in many local 5K races to support charitable causes.

Most of Rivera’s races are 5Ks. “The 5K is very approachable on most levels,” he says. “It’s an attainable goal.” Second Capital’s name is reflective of Vineland as a South Jersey hub. “Running the Avenue 5K is our flagship event,” he says. “The race, which starts and ends on Landis Avenue, is where Rivera runs and where the idea was born.

“Races in the area were dwindling; they just weren’t as exciting,” he recalls. “I wanted to set a precedent, raise the bar on the type of events. I wanted good races to happen. In 2018 I officially started a Facebook page and group. In 2019 we had our first Run the Avenue 5K. On the way to that I helped start a couple of races. So in 2019 we had four to five different events.”

In September 2020 they returned from lockdown.

Second Capital is involved with two other community programs. The City of Vineland’s Recreation Department has hosted Summer Series, a free running program for all ages, for years; Rivera now works in partnership with them. He also started the Vineland Youth Running Club (VYRC) to increase interest in running for younger people. VYRC relies heavily on volunteer coaches. It also has fundraisers; one was a one-mile Serene Custard Series, held over three weeks with an ice cream at the end of the run. At races, Rivera has “been adding on Youth Miles and free 100-meter dashes to increase interest in younger people.” Rivera likes making it family-friendly and hopes to inspire a running culture in our area.

Familiar faces at area races are Adam Capoferri and his daughter, Gianna, 13. Gianna and her younger twin sisters run with Vineland Youth Running Club. Capoferri likes that Rivera is “trying to build community cohesion through running.” As a state trooper, running helps Capoferri stay fit for work. But his favorite part? “I love it because it’s a sport I can do with my daughters. Andy inspired all that. Rivera also inspired Tim TV, Tim Gannotta’s race videos. Gannotta, who ran cross-country for Vineland High School, started running seriously again in his 40s. “I run between 25 and 40 miles a week, only taking off one to two days a week,” he says. Gannotta runs several races a month.

“Andy bought a GoPro and said put this on your head.” Now Gannotta interviews runners at races and Rivera edits the footage to “make them inspirational. It’s on Second Capital’s YouTube and Instagram,” Rivera says. “My mission for Tim TV is to #1, have fun; #2, to show running is fun; and #3, to show no matter your skill level if you’re winning in the race or coming in last, you’re an inspiration to everyone.”

Gannotta wears neon pink shorts, making him easy to spot. After recovering at the finish line for a bit, I saw him coming around again. He did a second lap. I was inspired… but not that inspired.

For interested newbies, Smith advises “to start small, set a goal for yourself, and be sure to get good running shoes.” Personally, I recommend the Couch to 5K training app, which uses interval training. Sign up for a race; it will motivate you to train. It’s good to start a running group chat, join with a few people to post training runs and hold each other accountable.