Skunks are best known for what they leave behind. 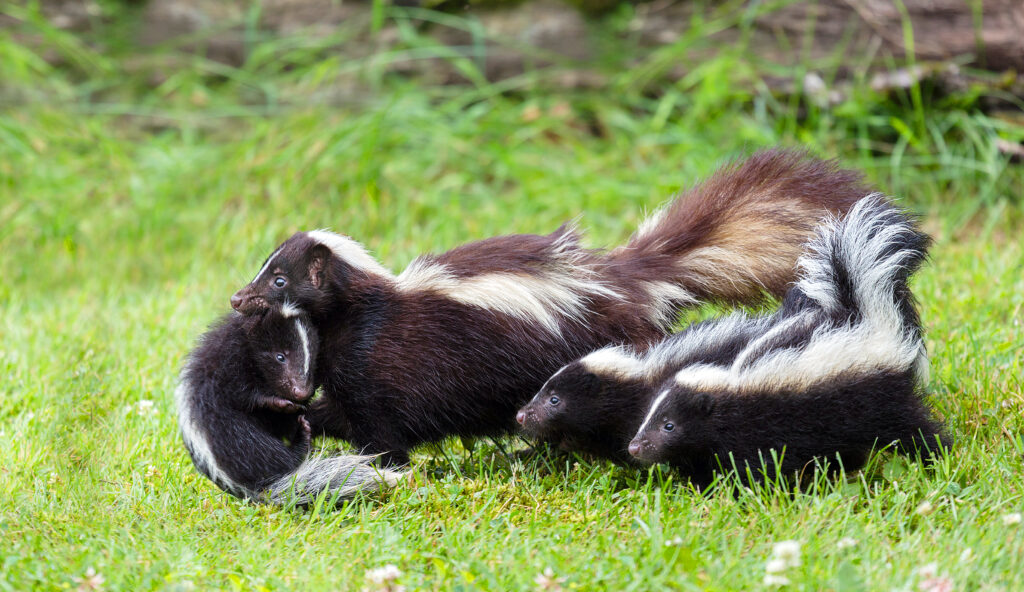 Mother skunk carries its baby by the scruff while two others are in tow.
by J. Morton Galetto, CU Maurice River

For a number of weeks I have noticed that a corner that I pass in my car each day has the bouquet of striped skunk. Some days the odor is stronger than others. I don’t see any roadkill; there is just the smell of anal musk. So I wondered what series of phenomena might be responsible for the lingering smell over a span of several weeks. Time to learn more about Mephitis mephitis (roughly translated, noxious vapor), the striped skunk that is prevalent throughout much of North America. One story says that it’s an Algonquian Indian word meaning “urinating fox.”

So now when I round that corner I envision a major love triangle and lots of jilted pursuers.

Skunks are best known for their lingering impression. They are in the order Carnivora, all of which have scent glands, e.g. dogs, cats, racoons, weasels, hyaenas, seals, walruses, and river otter (Nowak, R.M.) But not all of these are repulsive; in fact beaver are said to smell of vanilla. A beaver does not live on the corner!

The spray can temporarily blind an attacker. A 1999 study published in Chemical Educator suggests that high concentrations can even be potentially fatal to humans. I have found no records of fatalities; in fact, some folks can’t smell the odor and are unaffected by it. That would not be me. Musk can successfully repel some major predators like bear, wolves, foxes, and badgers. Yet eagles, owls, hawks and possibly others are apparently not impacted.

If you or your pet are sprayed, leave the tomato juice in the cupboard; it is not a good choice for thiols. The recommended formula for alleviating the lingering odors is a mixture of 1/4 cup baking soda, 1 to 2 teaspoons of a grease-cutting liquid detergent like New Dawn, a quart of three-percent hydrogen peroxide. Currently, I simply keep a product on hand for my spaniels who seem to think, each time, that messing with skunks will somehow produce a different end result. Plus, peroxide can bleach hair and I’m not opting for platinum blonde for either my spaniels or me.

A skunk’s diet consists of predominantly insects. In fact, skunks are considered to be more beneficial in our yards than not. Those with perfectly manicured lawns may not appreciate that they dig for grubs. Yet besides eliminating pest insects, skunks eat field mice, moles, lizards, poisonous spiders, berries, roots, leaves, fungi, nuts, and snakes. Ground-nesting birds and eggs are rarely eaten.

Ophiophagy is the term for the eating of snakes. Some animals with this ability, like the skunk, are immune to venom. Our opossum story mentioned their immunity and its link to peptides. In the skunk, other mechanisms are in play. One source states that skunks stare in a manner that charms the snake into immobility. In some parts of the world, farmers enlist ophiophagous animals to rid properties of poisonous snakes—i.e. in India, the mongoose.

Skunks are generally benign. Conflicts can arise if they get under buildings or other confined spaces. They can get into trash that has been turned over by larger animals but they are not climbers. Steps you can take to discourage them when necessary:
• Place an ammonia-soaked towel in a den’s entrance.
• Install a one-way door until you are sure they have vacated. Sometimes wads of newspaper stuffed in the entrance can help you to know they have left. And it sometimes acts as a mild harassment to encourage departure.
• Animals trapped in window wells can escape if you offer a slightly angled ramp.
• Animals in your house should be given an open door for leaving.
• Never chase or excite a skunk. Remaining calm is highly recommended.
(Sources: Many states’ Depts. of Natural Resource websites and US Humane Society)

At times, people can be less tolerant of skunks on their property. They eat eggs, so if you have a hen house that’s an issue. They will also scratch at beehives. Excluding them with a barrier is best because adults do not climb well. Feeding cats outside attracts skunks, raccoons, and foxes, all of which can harbor rabies.

Skunks are crepuscular, primarily moving about from dusk to dawn. Avoid skunks that appear to be aggressive or are active during the day, although this is not necessarily indicative of rabies. The U.S. Humane Society (humanesociety.org/resources/what-do-about-skunks) provides some good infomation on the topic of dissuading or removing skunks, as do many pest control websites.

After breeding in late winter or early spring, gestation lasts about two months. The two to 10 kits are altricial or in need of further care. They have very little fur but their skin has the pigment of the well-known black with white stripes that will define them. It is said that their prominent markings are showing off that they are noxious and not to be bothered. Evidently, my dogs did not get the memo, not even after multiple demonstrations.

Young skunks are raised in a den by their mother; males are absent from the parenting process. After six or seven weeks, when weaned, the kits will follow their mother as long as a year; early on they march single file. They tend to stay within a half mile of the lair.

Skunk dens are normally old fox or woodchuck holes. They will make use of hollow trees, foundations, areas under sheds, and the like. If your corner of the world has a skunk love triangle in progress you may need greater tolerance, a Havahart trap, an exterminator, or another imaginative solution. But whatever you choose, know that skunks are primarily beneficial and in my opinion very cute at a distance.