Watching ducks? They’ll have an eye on you! 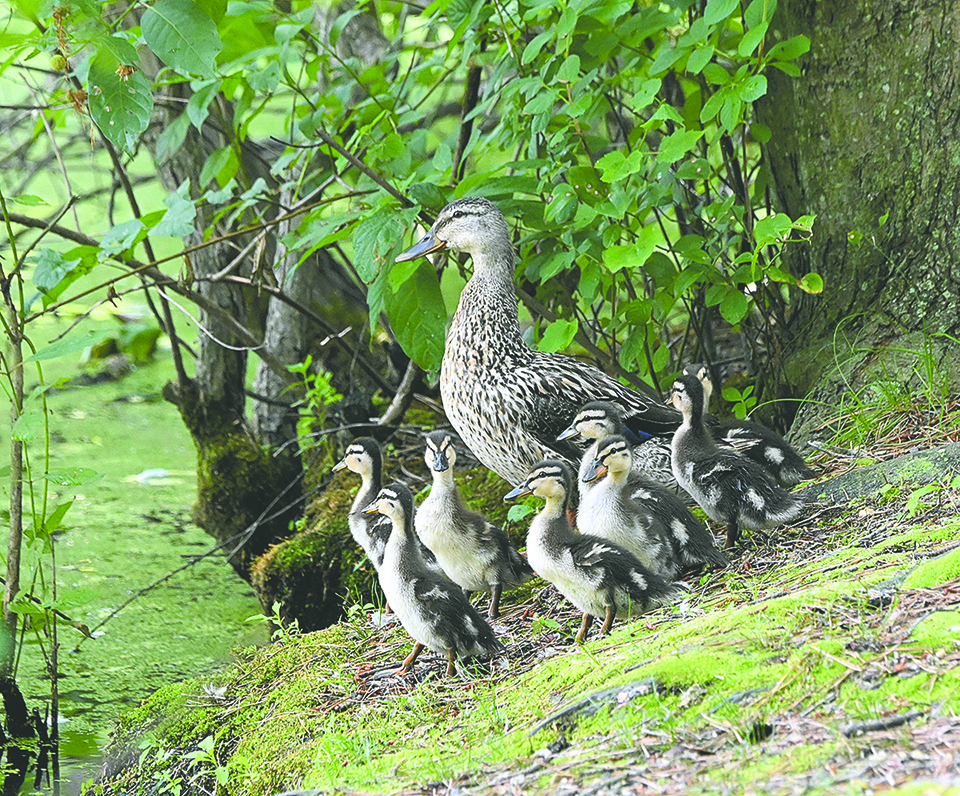 I’ll never forget many moons ago when I took my then six-year-old daughter to the doctor and she decided not to participate in the exam. She crossed her arms and closed one eye. The intrigued physician inquired, “What are you doing?” And she replied, “I’m sleeping, with one eye open.” That’s when I decided my daughter was indeed a bit of a bird. All kidding aside—well, most kidding aside.

It’s time to talk about ducks. Many birds nap while resting one side of their brain and leaving the other awake. This is called single-hemisphere sleep. Scientists, filming and studying mallards at night, discovered that ducks on the outer edges of a group will engage one side of their brain in sleep but the other side will be alert to danger. The ducks in the middle of the cluster may have both eyes shut, but the vigilant ones on the outside edges will remain on guard.

Ducks possess acute vision both near and far. Like many avian prey species, their eyes are on the sides of their heads and provide a 340-degree field of vision, allowing them to monitor a great deal of territory to protect themselves.

Their many other adaptions make them well-suited to be classified as waterfowl. From their bills to their webbed feet, they are especially fitted for their watery surroundings and aerial migrations from one body of water to another. Their webbed feet are great for paddling. Like the bottom of an oar, the continuous surface area can push water better than the separated passerine toes designed for perching. The webbing also helps ducks travel over muddy marsh surfaces without sinking in, like a snowshoe on a blanket of white. Depending on the species some ducks are cavity nesters and others raise their young on the ground. Those that nest in trees have a special claw on the tips of their webbed toes, enabling them to grip bark and branches.

Ducks live on every continent but Antarctica so they have adapted to many climates. Because their webbed feet have no blood vessels or nerves they can’t feel temperature. On an icy pond or in frigid waters they are, well, “a duck in water.”

Duck feathers have a downy underlayer similar to that of young birds, which insulates them against severe temperatures. The down traps air that is heated by the body and keeps ducks warm, a fact not lost on manufacturers that use goose down in jackets and coverlets. You may also have noticed ducks preening or passing their beaks over their feathers. If you watch closely, what looks like an obsession of continually returning to the base of their tail has great purpose. The uropygial gland located there has a waxy substance that they spread over their feathers for waterproofing.

Richard LeMaster developed a method of identifying ducks by their beaks alone. He also described, as have many other waterfowl experts, the flight heights or levels for each species. Heights, speeds, and flight styles help in duck identification.

Ducks are omnivores; depending on the species their diet can include plants, insects, snails, mollusks, other invertebrates, acorns, fish, as well as gravel and small stones. The latter are used in place of teeth for grinding. Waterfowl have a gizzard, a very muscular organ that uses the rough textures of stone and gravel to mechanically break down food. Birds and crocodilians evolved in prehistoric times from a group called Archosaurs, and today they still have gizzards like their ancestors.

The longer the daylight hours the more eggs a duck can lay. Waterfowl and chicken farmers often increase light artificially to get hens to produce more eggs. Broods can vary, and on average ducks lay eight to 15 eggs. However, some ducks “dump” in other ducks’ nests, fostering out their responsibilities in a practice called nest parasitism. I once read of a record 50 eggs in one wood duck’s nest. In some instances dumping can be across species. A Canadian study found that 90 percent of canvasback nests also contained redhead duck eggs. Eggs must be turned and warmed so in a nest this large number of eggs would likely fail. Thus, parasitism is often counterproductive. However, CU Maurice River’s nest camera has documented 24 chicks successfully hatching out of one wood duck box!

Ducklings are precocial like shorebirds; their eyes are open at birth and within a day or two they are seeking their own food, although they still stay close to their mother. Within 40 to 60 days they reach complete independence.

Although 97 percent of bird species don’t have a phallus, male ducks have a retractable organ for mating. In autumn it drops off, only to be re-formed in spring. This phallus can grow to be the length of their body or even longer, and it is a corkscrew-shaped appendage with no blood or muscle supporting it. Reproduction occurs so quickly that only a high-speed camera can capture the half-second process (Yale Scientific).

Ducks are in the fast lane in other ways as well. They have very strong chest muscles that enable great feats of flight, and most waterfowl can reach speeds of 40 to 60 mph. Ducks Unlimited shares that mallards assisted by a tailwind have been known to fly 800 miles in a single eight-hour flight. Ducks also have 12,000 separate skin muscles for individual feather control. This plays a part in flight and the insulative qualities mentioned earlier. Black brant are the champion flyers of the duck world, traveling about 3,000 miles in just 60 to 72 hours. While canvasbacks can fly in the low 70 mph range, a red-breasted merganser was clocked at 100 mph.

We could fill pages about the miraculous qualities of ducks, so why not join us for our upcoming Duck Waddle adventure. CU Maurice River’s naturalists will fill your morning with a host of opportunities to learn about ducks’ habits and habitats. n