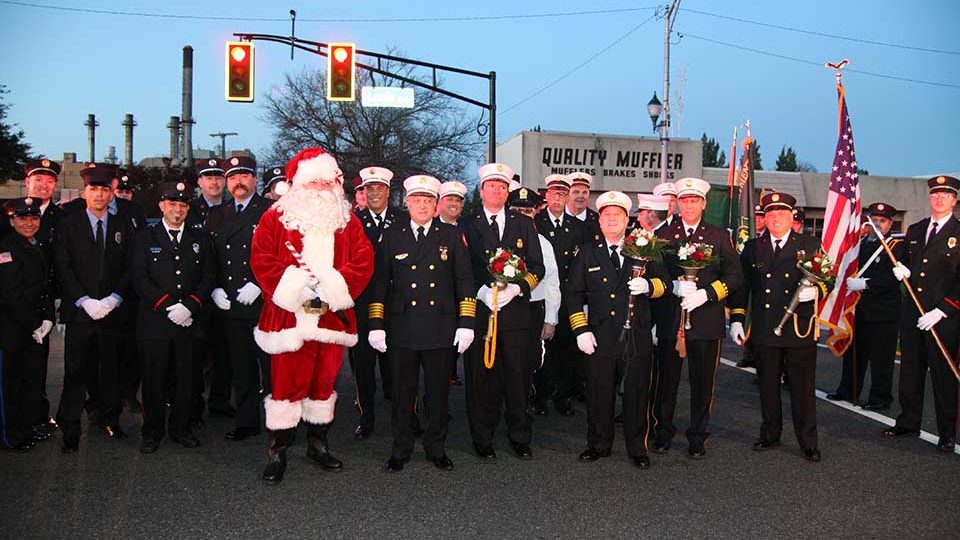 To anyone casting a glance at the abundance of floats and costumed marchers cruising slowly down Landis Avenue on a somewhat chilly evening last month, the sight would appear to be a holiday celebration. But upon closer inspection, the city’s annual Christmas Parade was serving a dual purpose in 2022, doubling as a commemoration of the Vineland Fire Department’s 150th anniversary.

Over the last decade or so, various Vineland institutions, including the town itself, have celebrated their sesquicentennials. The Fire Department’s late arrival to the party can be explained by A.G. Warner in his Sketches, Incidents and History. Vineland and the Vinelanders, which reports that, during the city’s early years in the 1860s, “large fires frequently broke out, owing to the carelessness and ignorance of some of the settlers,” but notes that in each of these cases the resulting damage was confined to wooded areas limiting the destruction to timber and undeveloped land. Settlers banded together in any attempt to quell the blazes. The history pages of the Vineland Fire Department website explain that “in the early history of the Borough of Vineland…each householder took fire precautions as he deemed necessary. Buckets were the main implement used, either the ones commonly found about the home which could be taken to the well in time of need, or special ones standing filled for an emergency. The leather fire bucket was the first specialized equipment, usually of three- gallon capacity. In Vineland, cisterns were established at various corners on Landis Avenue to supplement the individual wells.”

In times of emergency, the website reports, “citizens formed human lines called ‘bucket brigades’ stretching from the nearest well or cistern to the fire.”

Yet, no effort was made at the time to organize a firefighting unit. That wouldn’t happen until 1872 when, on July 2 of that year, a fire, which spread through several buildings located between the Boulevard and Sixth Street on the north side of Landis Avenue, prompted the formation of an organized team of firefighters christened the Vineland Hook and Ladder Fire Company.

The fact that the Company was created in three weeks may have been prompted by the reported $20,000 in damages resulting from the July 2 blaze. During its formation, according to the Vineland Fire Department website, the Company “appointed an Executive Committee consisting of Edwin M. Turner, [town founder] Charles K. Landis and George Pearson to purchase hooks, ladders, buckets, a fire extinguisher, chains, crowbars and badges for the hats of the men and also to order a Hook and Ladder Truck.”

The first fire station was located on the south side of Landis Avenue on the block between Sixth Street and the Boulevard. By October 1872, a new fire truck was delivered to the site.

For five years Vineland’s fire company was able to contain conflagrations, but in September 1877, a fire ravaged several businesses on Landis Avenue, and it was decided that a new brigade and a fire engine-plus-hose wagon were needed, so the Niagara Engine Company was formed the following year.

As the Vineland Fire Department website explains, “until the close of the 18th century, fire engines could only pump water directly into the blaze. If the fire was beyond the reach of the nozzle mounted on the pumper, nothing could be done except with buckets. The invention of [the] hose was a tremendous step forward. Firemen could enter the burning structure with a hose line and go directly to the flames while the engine was operated on the street.”

Armed with modern equipment, the Niagara Engine Company soon consolidated with Vineland Hook and Ladder Fire Company to form Pioneer Fire Company No.1, which was housed in a new facility on Sixth and Wood streets.

According to the Vineland Fire Department website, the firefighters were confronted with financial issues during the early years. It wasn’t until 1878 that the fire department began receiving appropriations from public monies and, in 1878, those appropriations amounted to $256.78. The website explains that “expenses had to be met through private donations…but the donations were much slower in arriving than the speedy firemen in response to fire alarms. Ungratefulness was not the reason. It was just that the people had so little.”

By March 1880, a Fire District was officially created, and five Fire Directors were elected by voters.

Vineland entered the 20th century without any changes made in its firefighting unit, but when another brigade was formed in 1915, it was technology that guided its creation. The Reliance Fire Company was Vineland’s first to employ motorized vehicles. Although Vineland proper was now protected by two fire companies, the surrounding Landis Township lacked any such organized unit. According to Linda M. Kandle’s A History of the Vineland Fire Department, the issue was addressed in 1919 when the South Vineland Company was established, with facilities at Main Road and Sherman Avenue. Three years later, the North Vineland Fire Company was added, headquartered on the Boulevard. In 1923, the Main Avenue Fire Company No. 1 was set up at Main and Oak roads.

Until 1931, there were no career firemen in the city or outlying areas. The hiring of Howard Garrison changed that. Soon he was joined by four other career firefighters who alternated shifts so that someone would be on duty at the fire hall during the day.

Kandle’s study identifies that another Vineland brigade was added when it became too difficult for East Landis Township to be cared for by Buena Vista Township’s District No. 2 and the South Vineland unit. The Panther Road Company was formed in 1946.

And when the Borough of Vineland and Landis Township merged in 1952, it was followed by the formation of the City of Vineland Fire Department that eventually consolidated the Pioneer and Reliance companies. The last of Vineland’s fire companies was created in 1990.

With 150 years behind it, the Vineland Fire Department is already planning its future. Its headquarters is looking to relocate to a brand-new facility on the Boulevard as it begins the countdown to its bicentennial.