Blackgum begins its colorful display in early autumn, shifting from yellow to orange to bright red and scarlet along the banks of our coastal plain rivers. 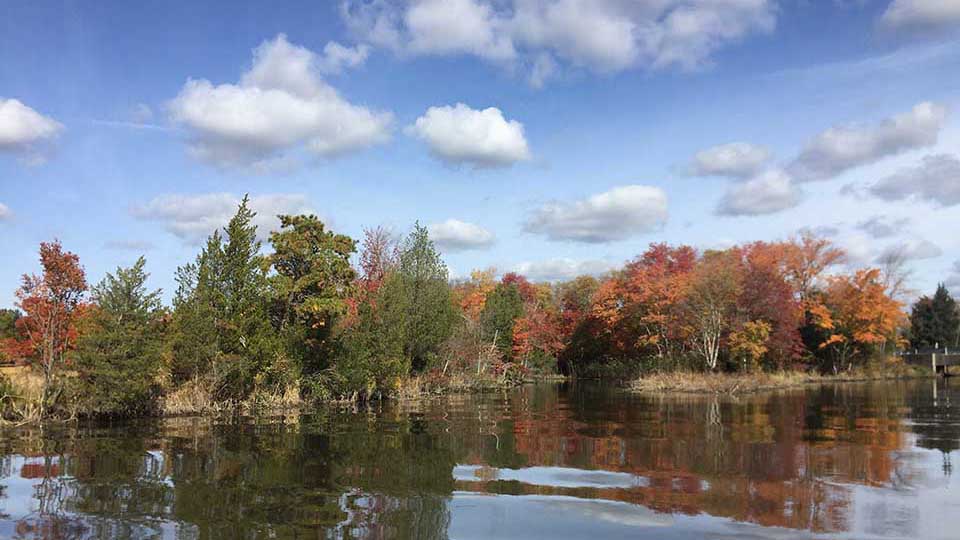 It was while taking carving lessons with Vernon Smith over 30 years ago that I first became familiar with tupelo. We were carving fancy birds as opposed to smooth decoys. The choices of wood for our class were basswood or tupelo. Many competitive carvers, including world champions, use tupelo, which can be worked with hand tools or power tools. It is lightweight and sands to a smooth finish, allowing it to take the fine details of burning-in individual feathers. It permits greater detail than basswood and is less likely to fuzz up. Wisely, Vernon would cut us a blank on a band saw and then we could begin to rough out the birds ourselves. Most of our carving tools were rather benign with the exception of knives, but a band saw can remove not just wood but also digits. I thank Vernon for his judgement!

At the time I wasn’t aware that tupelo, blackgum, pepperidge, and sour gum are all of the same genus—Nyssa. However, carvers always call the wood tupelo and the species they use is Nyssa aquatica, or water tupelo, a southeastern species.

There are about 10 different Nyssa species worldwide. The one common to New Jersey is Nyssa sylvatica—blackgum or black tupelo. Most New Jersey foresters defer to the common name blackgum. Its range is primarily east of the Mississippi River to the Atlantic coast.

Why gum? In Trees of New Jersey and the Mid-Atlantic, Christopher T. Martine comments: “There is no clear reason why we call Nyssa sylvatica blackgum, since it does not exude any gum-like substance. The sweetgum does produce gum, but not the kind used commercially for chewing. That comes mainly from the sapodilla plant, which produces gum called chicle. Chicle is one of the main ingredients in chewing gum.” Well, for me that doesn’t explain why it’s called a gum tree, only why it shouldn’t be.

The common name for Nyssa is tupelo, which derives from a Native American language. Tupelos are associated with wetlands and water corridors, growing commonly in creek bottoms of the southern coastal plains. In New Jersey they are found in flood plains, swamps, and bogs, making them one of the vegetative species used in part to delineate wetlands. The Creek tribal word for tree is ito and opilwa is swamp; colonists anglicized this into “tupelo.”

Aside from its use in carving, Nyssa is also selected for unseen parts in furniture, plywood, pulp, railroad ties, boxes, crates, tool handles, conveyor rollers, and pallets. Its pulp makes high grade book and magazine paper. Tupelo trees often become hollow with age and historically beekeepers took advantage of this aspect, cutting a log from the trunk, placing a cap on one end and a roof on the other, and finally drilling an entrance hole in the log for bees to enter. Bee diseases have made this style of bee box go out of fashion.

The grain of tupelo is interlocked and twisted making it nearly impossible to split, but whole logs can be burned.

In the southeast beehives are often placed near Ogeechee or white tupelo trees, Nyssa ogeche, and thus the bees produce the prized tupelo honey, which is very mild and light. White tupelo trees are most abundant in Georgia and Florida wetlands. The honey from tupelo reportedly has an unusually high fructose to glucose ratio, and therefore the sugar molecules release over a longer time. The growers contend that this reduces the “crash” more commonly associated with refined sugars.

Tupelo honey also provided a metaphor for musical artist Van Morrison, who used it to compare his marriage and the love for his wife in the lyrics of “Tupelo Honey”: “She’s as sweet as tupelo honey. Just like honey from the bee.”

The trees have a bluish-black berry fruit that is called a drupe because of the way it dangles on the stem. These fruits ripen from now through October. The common name “sour” gum comes from the fact that the berries are acidic and unpleasant. They are edible but not desirable. If you were forced to forage for survival they would be an option, but for those who choose to eat them willingly they are normally offered in a heavily sugared jam or jelly preserve.

In regard to medical uses the bark produces vomiting, while ooze from the roots has been used in eyedrops and for killing worms in children.

It is timely that we are speaking about blackgum. We are one week into fall and the first tree to display autumn color is Nyssa sylvatica—and it is magnificent. The display is dramatic, shifting from yellow, to orange, to bright red and scarlet, and making the banks of coastal plain rivers an ever-changing pageant of color. In fact it is unusual to read a description of the tree, in even the driest of field guides, that doesn’t describe them as being best known for their spectacular autumn showiness.

During summer the leaves are a deep green, shiny on the top surface and slightly leathery. They are obovate, meaning narrow at the end with the stem, and are very slightly toothed along the margin. The tree is both male and female and pollinated by bees. Nyssa is deciduous with alternate simple leaves that are shed in the fall. So the spectacle of color will have a dramatic beginning and a very stark ending—a tragic opera of sorts. Don’t miss this year’s show and remember to shout out a “bravo” or two!