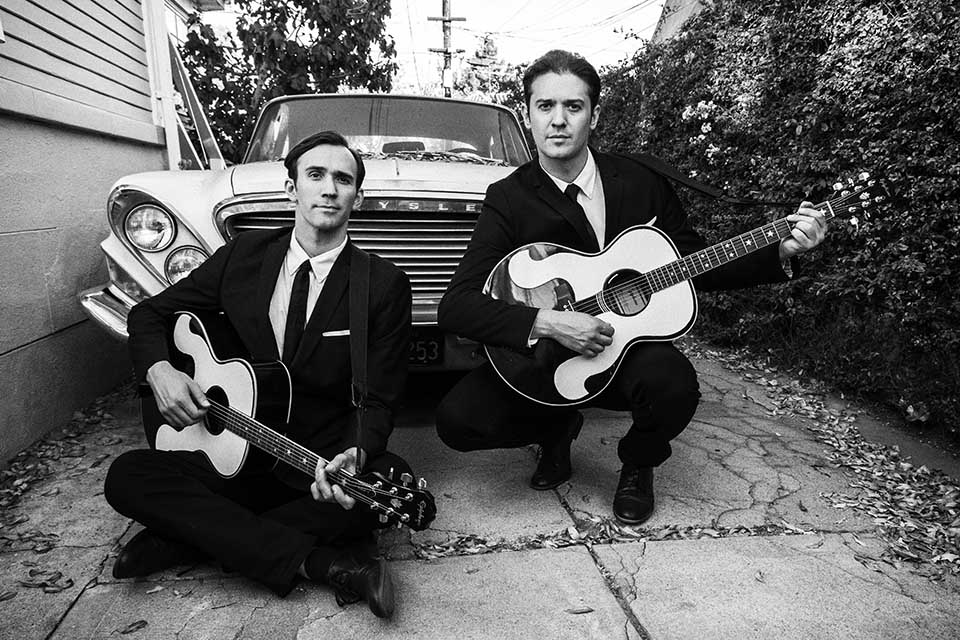 The next night brings the Zmed Brothers, performing a tribute to another pair of siblings, the Everly Brothers.

Since rock’s inception in the 1950s, brothers have been a part of the musical landscape. In addition to the Allmans and the Everlys, we had the Beach Boys; The Kinks; the Neville Brothers; Earth, Wind & Fire; the Jackson Five; Creedence Clearwater Revival; the Brothers Osborne; the Jonas Brothers; the Righteous Brothers; and the Bee Gees, to name-drop a bunch. Oh, wait a minute. The Righteous Brothers were not brothers.

Is there something in the DNA that draws siblings together in song? You can make a case that the way the Everly Brothers blend their voices to make such sweet harmonics would not be possible had they not been brothers.

Then what about Simon and Garfunkel? Their harmonies sound so…brotherly, but then they patterned themselves after the Everly Brothers. The two duos had something else in common—spats. Don and Phil Everly stopped talking—and performing—with each other for years. And the constant splits between Art Garfunkel and Paul Simon are legendary.

“Just because there were other groups of brothers who had disagreements doesn’t mean all bands would have the same situation,” said Goldflies, aka Rook. In case you’re too young to remember, Duane Allman was killed in a motorcycle accident outside of Macon, Georgia, little more than two years after the formation of the band.

“The effect of the loss of Duane Allman, the founder of the band, cannot be overstated. In my experience in the band, Duane Allman was revered and his loss from that tragic accident was as if a brother to each member of the band had been lost,” says Goldflies, who joined the band in the 1970s.

“A Brothers Revival” has the roots to showcase the music and spirit of the Allman Brothers, who released their first album in 1969. Call it a legacy band instead of a tribute band, one where Goldflies spent his years performing with—and learning from—Gregg Allman, Dickey Betts, Berry Oakley, Butch Trucks and Jai Johanny “Jaimoe” Johanson. (Oakley, the band’s bassist, also died in a motorcycle accident a year after Duane.)

He and the band received a Grammy nomination for the Allman Brothers instrumental “Pegasus” from Enlightened Rogues, a Billboard Top 10 certified gold album.

Also in the band for this concert is keyboardist and singer Mike Kach, who toured with Dickey Betts and Great Southern for more than a decade and bears the same type of vocals as Gregg Allman.

During a show that lasts about two-and-a-half-hours, “A Brothers Revival” goes through the litany of Allman Brothers hits: “Jessica,” “One Way Out,” “Statesboro Blues,” “Midnight Rider,” “Ramblin’ Man,” “In Memory of Elizabeth Reed,” “Whipping Post,” and a few surprises along the way for the fans that enjoy the deep jams.

“ ‘A Brothers Revival’ is my best effort to recreate the vibrancy and intensity I experienced playing in the Allman Brothers Band,” Goldflies says. During that time, I recorded three albums with the Brothers, and I was always asked to bring my own approach to bass playing on stage and in the studio. I view ‘A Brothers Revival’ as a continuation of the music that I learned in my time with the Brothers. I’d like to think we are creating another chapter in the history of that great band.”

The concert draws on all aspects of the music of the Allman Brothers, from Betts’ strong musicianship and leadership, Gregg Allman’s bluesman chops, Butch Trucks’ no-nonsense style of drumming, and Jaimoe’s subtle jazz and Gulf Coast-influenced funk rhythms.

“My entire band approaches this project with great determination and reverence to do justice to the music of my former group, the Allman Brothers,” Goldflies says.

The Everly Brothers are as different in tone and texture from the Allman Brothers as night is from day. Both sets of performers can rock, but for ballads, give a nod to the Everly boys.

Dylan and Zach Zmed grew up in an entertainment household. Their father, Adrian, played Danny Zuko in the stage show Grease, set in 1959. Before each performance, the loudspeakers would play golden oldies from that era, including the Everly Brothers. That was in the 1990s. But it wasn’t until 2012 that the Zmed brothers took this singing thing seriously. They played at clubs, with songs that highlighted their close harmonies—the Beatles, Crosby Stills and Nash, Simon and Garfunkel and of course the Everly Brothers.

“Whenever we would sing an Everly tune, folks would always come up to us and say ‘I love that song….’ We started to notice a real void in the awareness of Don and Phil’s impact on all generations of musicians that came after them,” Zach says. “We asked ourselves, `Is there anybody out there doing a tribute to their history as well as their music?’ So that and our best friends and business partners Burleigh Drummond (drummer and tour manager) and Rich Rees (booking agent) along with the encouragement and mentorship of dear friends and family are really what has set us on the path that we are on today.”

The duo has 27 numbers in their set. “One of the hardest things we have faced over the years with the show is having to choose what songs not to do. There are just so many great songs in their discography. All the huge hits and some songs are uniquely tied to our story in having performed Everly material over the last several years.”

Near the end of the show, the Zmed brothers mosey on out to the audience and chat, gathering feedback on ways they can improve the show.

Dylan and Zach are too young to have had the chance to meet Don or Phil or attend a concert. “Even though we never got the chance to see them in person, we’ve done our best to deeply study their treasure trove of live footage, interviews, performances, and recordings. There is no substitute for having a live experience but with all the research we’ve done it feels like the next best thing,” Dylan says.

Over the years they have met some family and acquaintances. They’ve developed a relationship with Del Bryant, son of Felice and Boudleaux Bryant, who wrote more than 30 of the songs recorded by the brothers, among them “Bye Bye Love,” “Wake Up Little Susie,” “All I Have To Do is Dream,” “Bird Dog,” and “Devoted to You.”

“Our connection with Del has helped shape our show to a huge degree. He is a mentor, an advisor, and a dear friend to us,” Dylan says.

The Zmed Brothers seem to have a spiritual connection to their heroes. “We’ve come to realize over the years just how much of a blessing it is to have the opportunity to celebrate their brotherly legacy, not as impersonators, but through our own spirits as The Zmed Brothers,” Dylan says. “What it really comes down to in our minds is the importance of honoring something greater than ourselves. They are the most influential sibling rock n’ roll duo of all time and as artists we consider it our rite of passage to pay homage to them.”

Then there’s the infamous spat that drove the Everlys apart: “Doing our Everly show has been remarkably therapeutic for our relationship as brothers. The Everly Brothers career is at times just as much a cautionary tale as it is a success story to us, and we can understand why. We can certainly attest to the fact that it can wear you down no matter who you are with. Our band often acts as a buffer between us to keep us civil. Our manager Burleigh most of all has kept us in line, but Zach and I work hard at reminding ourselves of the greater purpose we are aiming to serve, and it restores our faith in the fact that it will get us through the thickest and thinnest of times, despite our differences and quibbles.”

Despite the quibbles, there is still something to be said for family ties.

“The long tradition of family singing together is most certainly the strongest thread in the fabric of all music,” Dylan says. “There is a resonance that families make together where the sum is greater than the individual parts. It is something I think that all music strives for and when family can get along enough to make it there truly is magic in the air.”