Landis bookcases open a window to the life of Vineland’s founder. 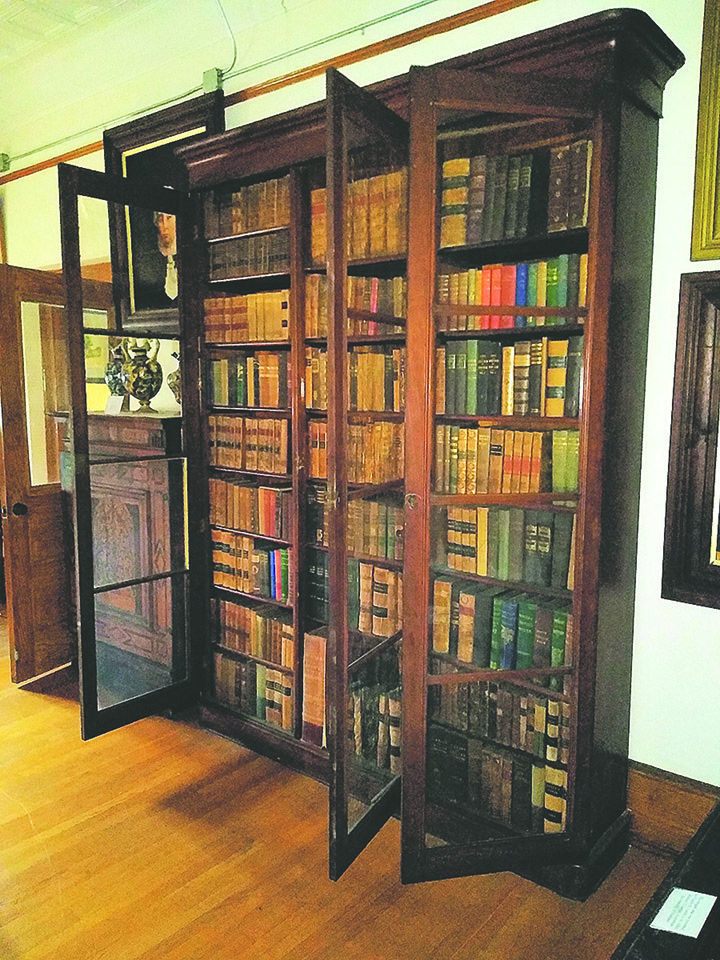 Last month, Patricia Martinelli, curator of the Vineland Historical and Antiquarian Society, began the process of unlocking a portion of town founder Charles K. Landis’ archives that had never been explored or documented in any detail over the past century. Two bookcases, filled with books and other material owned by the Landis family during the 19th century, were opened for the first time in what is believed to be decades. What was discovered offered more than a few surprises.

A copy of Our Summer at Sunnybrook by Mary Noel Meigs sits on one of the shelves and is inscribed “Clara F. Meade from Aunt Mary.” This children’s novel, published in 1860, was presented to Clara when she was 11 years old, eight years before she became Mrs. Charles K. Landis.

Aunt Mary, according to The Female Poets of America by Rufus Wilmot Griswold, was born Mary Noel Bleeker, a member of a family “so long distinguished in the annals of New York.” Her mother’s father was Major William Popham, a member of General George Washington’s staff.

Mary distinguished herself as an author of poetry, essays and novels. Her marriage to Pierre E.F. McDonald in 1834 ended with her husband’s death in 1844. The following year she married Henry Meigs, Jr., son of a U.S. Congressman. The Meigs would soon move to the developing city of Bayonne, New Jersey, where Henry would become the municipality’s first mayor a year after Clara married Landis. Mary died on May 13, 1890 in Perth Amboy, New Jersey.

The existence of the copy of Our Summer at Sunnybrook in one of the Landis bookcases reveals that Clara’s departure in 1875 did not include all her belongings and that Landis and his sister Matilda saw fit to preserve it over the subsequent decades.

Another book of interest is French novelist Jules Verne’s Le Tour du Monde en Quatre-Vingts Jours or The Tour of the World in Eighty Days. The novel, more commonly known as Around the World in Eighty Days, was first published in France in 1872 and in English the following year. The first U.S. edition was published by James R. Osgood and Company in Boston. A second edition followed in 1874, and it is this release that Landis acquired.

What makes this discovery in one of the Landis bookcases significant is that, while this book is an adventure tale centered on a bet that its protagonist can complete a journey across the world and back in 80 days, it confirms Landis had been reading Verne, whose earlier books include the science-fiction novels From the Earth to the Moon (1865) and Around the Moon (1870), which were later combined as A Trip to the Moon and Around It.

In the late 1870s, Landis completed his own science-fiction novel, A Trip to Mars, which can be seen as having been inspired, at least in part, by Verne’s trailblazing work in the genre. Whether or not there are other Verne novels in the bookcases has not yet been determined, but an edition of Planetary and Stellar Worlds does grace one of the shelves.

While in England during his European trip in 1874, Landis began preparing for a visit to France by taking French lessons in London. He regretted not learning the language in his youth and spent the middle portion of his days in London with a tutor and the evenings reviewing his lessons before retiring for the night.

On one shelf of Landis’s bookcases, along with such titles as A Handy Book of Medical Information and Advice and What to Eat and How to Cook It, sits a copy of Spiers’ & Surenne’s French & English Pronouncing Dictionary, School Edition, a possible reminder of Landis’ determination to master the language.

Other shelves contain Markham’s History of England as well as a literary collection that includes a multi-volume set called British Poets. Landis’ reading habits would always return him to the greats of literature, some of whom (Dryden and Goldsmith) are represented in this series, while others, like Milton, can be found in their own anthologies upon the shelves.

One of the more curious items is certainly an 1897annual report of the Brooklyn Tree Planting and Fountain Society with the name “C.K. Landis” clearly inscribed on the front cover.

Next Week: The Gifts