Nothing to Sneeze At

Goldenrod gets a bad rap but it is insect-pollinated—not wind-pollinated. 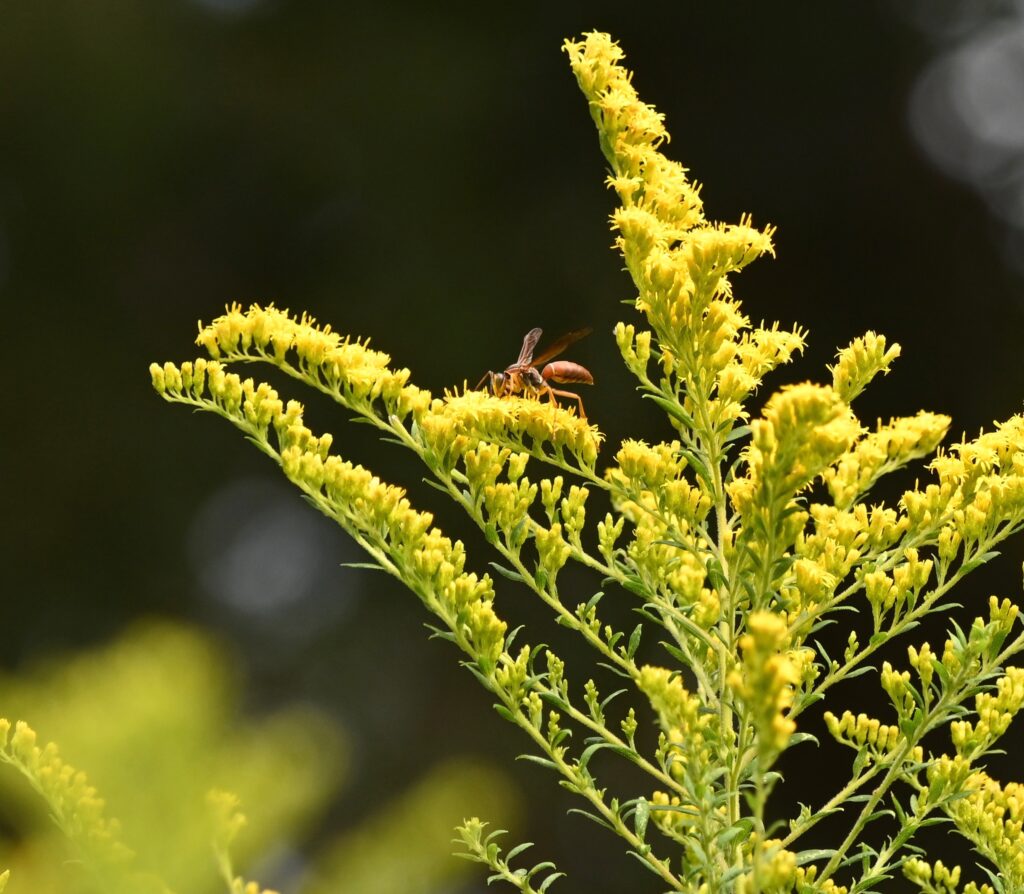 Wasp on goldenrod. The plant’s pollen never reaches your nose because its grains are too heavy to float. It must be pollinated by insects moving from flower to flower—the work of bees and butterflies—not the breeze.
by J. Morton Galetto, CU Maurice River

Our backyard has an unruly native wildflower garden. It is chockfull of pollinators like bees, wasps, and migrating butterflies. In the late summer and early fall sneezeweed, Joe Pye, asters, New York ironweed, and goldenrod provide important sources of nectar. The latter is our topic for this week’s column. Goldenrod, or Solidago, is a genus of more than 100 species and a number of these exist in our area. I hope to dispel the bad rap that goldenrod receives and reinforce the importance of pollinators.

Goldenrod is in the aster family. It is a perennial, returning year after year. The herb has beautiful blossoms of yellow and ranges from three to six feet tall. It grows from woody rhizomes, or underground horizontal stems.

Goldenrod is poisonous to some animals but has been used for centuries by humans in teas and traditional medicines. Some of the listed maladies that may respond to goldenrod include sore throats, toothaches, arthritis, bladder infections, gallstones, and it may also be used as a diuretic-antiseptic. James A. Duke, Ph.D., long considered a leading authority on herbal healing, wrote, “There is also clear scientific evidence that [goldenrod] is beneficial in treating kidney inflammation (nephritis).

University of Delaware Entomologist Doug Tallamy and his study team calls out solidago as the number one herbaceous genus, important to 121 species of butterflies and moths in our region and the top supporter of pollinators.

During a Living on Earth, National Public Radio interview David Inouye, a biology professor from the University of Maryland, makes an important point regarding the way supporting pollinators relates to us. “About one in every three bites of food that we eat is brought to us courtesy of pollination by pollinators, and so your diet would be much plainer if you didn’t have access to all those fruits, berries, nuts, and vegetables that are the product of pollination.”

Many farmers and beekeepers rely on each other in order to successfully bring food to our tables. As you are likely aware, European honeybees have been in serious trouble lately. Studies have shown the collapse in population is due to pathogens, climate change, and nicotinoids—insecticides chemically related to nicotine. The fact that goldenrod supports large numbers of native bees and honeybees is important. When many crops’ nectar sources are depleted, the late summer/early fall bloom of goldenrod provides nectar. In fact, the USDA notes that a number of native bees rely exclusively on goldenrod. This dependence on a narrow or specialized preference for pollen is called oligolecty.

Nicotinoids (or neonics for short) have been used to protect our crops, since they are toxic to invertebrates such as insects. But this may well be playing out in a counterproductive fashion. Neonics are systemic, meaning they actually travel throughout a plant’s vascular system to all parts of it, including the pollen. This means our pollinators are vulnerable to their deadly effects. Believe it or not, the plant retail trade often sells plants that are treated with neonics, which can kill pollinators in your garden, too.

European honeybees are also susceptible to a number of diseases, more so than our native bees. Many native bees are not source producers of honey, but a number of them are more diligent pollinators than the honeybees. (We’ll save a discussion of mason bees for another time.)

Pollinators in their juvenile stages are often specialists, dependent on very specific plants. Each butterfly and moth lays its eggs on a particular species that is its caterpillars’ choice food source. For instance, the monarch’s hostplant is milkweed and the small caterpillars that hatch from its eggs will feast on these plants as they grow. In the case of goldenrod, we are primarily addressing nectar or the fuel that powers the adult butterflies, although it is also the host plant for some juvenile moths and butterflies.

Over the years, allergy sufferers visiting our yard have taken one look at the goldenrod and done an about-face. When goldenrod blooms, its showy flower clusters are indeed a signal that hay fever season is in full swing. However, goldenrod pollen never reaches your nose because its grains are too heavy to float. It must be pollinated by insects moving from flower to flower—the work of bees and butterflies—not the breeze. Ragweed is an airborne pollen that is present when goldenrod is in flower and is most likely responsible for triggering sneezing, runny nose, and itchy eyes. Its bloom is inconspicuous so it eludes blame. Plants that rely on wind have to produce more pollen, whereas insect-pollinated plants have very directed couriers and need far less to propagate.

Numerous people are fond of birds and many songbird’s hatchlings are dependent on caterpillars for sustenance. In their adult form, butterflies are also an important food source for birds. Jim McCormac, biologist with the Department of Natural Resources in Ohio, did some deciphering and extrapolations on the connections between caterpillars, birds, and forests. He concluded that 100 birds likely eat as many as 72,000 caterpillars per acre per day. Taken to forest proportions of 640 acres and giving each bird a mate, that brings the number of consumed caterpillars to 921,600. If we then add the spring hatchlings to the picture, wow! Without birds our forests would be leafless (Scott Shalaway). And without pollination there would be no trees—a circle of life.

As you know, there is a domino effect in nature; each living creature is connected to another. So our food supply, health, and aesthetic appreciation for our environment all rely on pollinators. It’s time to welcome them into our yards!