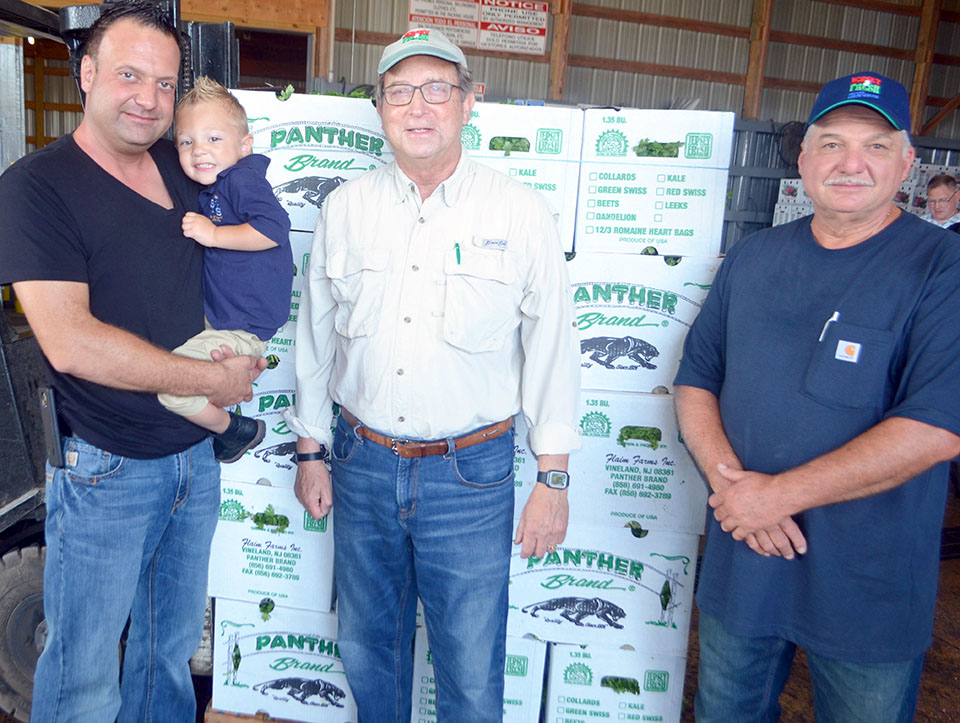 New Jersey Secretary of Agriculture Douglas H. Fisher along with state, county and local officials recently visited Flaim Farms in Vineland to highlight Jersey Fresh eggplant. New Jersey is No. 1 in the nation in acres of eggplant harvested, according to the Census of Agriculture released in April.

The visit included seeing a field of eggplant grown on the farm as well as a tour of the packing house. The census lists New Jersey as harvesting 849 acres of eggplant annually, ahead of California’s 705, Florida’s 685 and Georgia’s 624. No other state had more than 500 acres of eggplant harvested.

“New Jersey is the Garden State and Flaim Farms is an outstanding grower and packer,” Fisher said. “They produce several different varieties of eggplant and cater to a large range of needs in making delicious recipes for restaurants as well as for home consumption.”

Flaim Farms grows the Italian, regular, Sicilian, Indian, zebra, white and fairytale varieties of eggplant. During the peak of the season, which is currently underway, they harvest approximately 900 bushels of eggplant per day. Flaim’s eggplant is shipped as far as Chicago, Maine and the Eastern seaboard.

“We are having a good harvesting season right now,” said Bob Flaim Jr., who co-owns the operation with his brother Kevin. “The temperatures have made for ideal growing conditions in the last couple of weeks, with it being in the 60s at night and the 80s during the day. We are proud to be part of the Jersey Fresh program and contribute to New Jersey being a leader in vegetable production.”

Flaim Farms is one of the original six farms to join the Jersey Fresh program that began in 1984. It is a fourth-generation farm that started in 1934 and grows on approximately 400 acres. Along with Bob and Kevin Flaim. Bob’s son, Ryan Flaim, represents the fourth generation and operates R & R Flaim Next Generation Produce part of the organization.

Kevin Flaim led the start of the farm’s line of frozen and breaded eggplant cutlets and fries, utilizing its own Jersey Fresh “Panther Brand” eggplants. The line was well received and has led to the addition of frozen and breaded zucchini fries and coins. These products are available year-round in retail outlets throughout New Jersey and other Northeastern states.

Flaim Farms also won the Patrick Mullen Award by the New Jersey Department of Agriculture in 2012 for excellence in consistent fresh quality and grading.