On the evening of March 9, John Lodge and 10,000 Light Years Band bring The Moody Blues music to The Levoy. 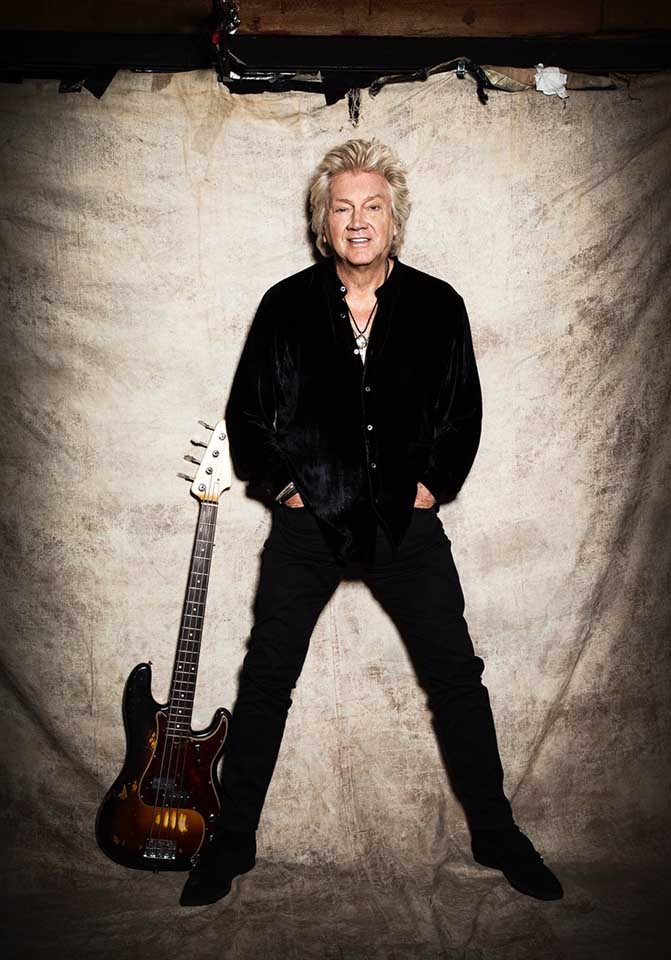 “I’m Just a Singer (in a Rock and Roll Band)” is more than a song written and sung by John Lodge for The Moody Blues. It’s a description of Lodge’s life for more than 50 years since he joined the Moodies. Lodge will be singing that song and more from The Moody Blues songbook when he and his band roll into the Levoy Theatre March 9.

“I will be keeping The Moody Blues music alive with some classics, some deep cuts, tributes to the other guys in the Moody Blues and, of course, my solo work,” he said, summing up what fans can expect.

The Moody Blues may have retired for the moment, but Lodge has assembled the 10,000 Light Years Band featuring long-term collaborator Alan Hewitt (music director and keyboards) and Billy Ashbaugh (drums) both from the Moody Blues touring band, plus Duffy King (guitars) and Jason Charboneau (cello).

“These are incredible musicians, and they help me recreate the feel of a Moody Blues concert,” Lodge said.

In January, Lodge released a new live album entitled The Royal Affair and After. The album features a string of Moody Blues hits, plus special tributes to all his bandmates: Graeme Edge, Justin Hayward, Mike Pinder and Ray Thomas. The contributions from Lodge included “I’m Just a Singer…,” “Gemini Dream,” “Ride My Seesaw,” “Isn’t Life Strange,” and “Steppin’ in a Slide Zone.” Most of the album was captured live in Las Vegas, with additional tracks recorded during subsequent dates around the country.

The album grew out of a 2019 tour Lodge participated in with YES, Carl Palmer, Arthur Brown, and Asia, dubbed the “Royal Affair Tour.”

The album also includes a special recording of “Late Lament,” by Moody Blues’ drummer Edge. The poem originally appeared on the album Days of Future Passed. Jon Davison of YES joined Lodge and the band for lead vocals on “Nights in White Satin.” Lodge brought in a cellist to bring an acoustic symphonic quality to rediscover songs such as “Isn’t Life Strange.”

Also included is Lodge’s tribute to his friend and fellow Moody, Ray Thomas, with his version of “Legend of a Mind.” The two first struck up a friendship at 14 when they met on a bus and formed El Riot and the Rebels. In 1966 the pair reunited in The Moody Blues.

“When we first put together the set list my thoughts were on how I could continue to keep The Moody Blues music alive for the fans; I wanted to bring them the experience that they have loved for so long and try and give them that full band concert feel with harmonies and orchestration. But this was before Covid, before the challenges we have all faced, and before touring was shut down for 18 months. Now, when I think about the album, it has an even deeper meaning for me. As I’ve always said, the fans truly are the heart of the Moody Blues. They have travelled a long time with us, and I hope will continue to do so,” Lodge said.

Born and raised in Birmingham, England, Lodge wanted to be a car designer, but music intervened. He bought his first guitar when he was 13 years old. At 16, he bought his Fender Precision Sunburst Bass, which he would use to perform on all the Moody Blues hits.

Like so many British musicians that first made their mark in the 1960s, Lodge harks back to 1950s America for his influences from that era: Buddy Holly, Fats Domino, Little Richard, Chuck Berry and Jerry Lee Lewis.

“Buddy Holly influenced my songwriting, and the left-hand piano of these great artists convinced me to play bass,” Lodge said.

“In my early days as a musician there were no bass guitar players that I knew of, but during the years, I thought James Jamerson, who I saw many times, drove the bass like no other person,” he said.

Jamerson was the bass player for the Funk Brothers, the Motown house band.

Besides playing dates at small theaters like the Levoy, Lodge has done the rock cruise circuit, with and without the Moody Blues.

Half of the boat has seats in the theater on one night and the other half on the second night, so it is a different audience.

“It’s great as we have some of our fans on board—and often see familiar faces—but the cruises also give us a great way to reach new audiences.”

After many years of eligibility, Lodge and The Moody Blues entered the Rock and Roll Hall of Fame in 2018.

Is there anything Lodge would still like to accomplish in the music field?

“As a musician, every day can lead somewhere different, and the accomplishments come when you are not looking for them,” he said.

As for the Moodies, if they came out of retirement, he has no doubt he’ll be on the road with them.

“If the opportunity arose, of course! I am a Moody Blue. I always will be. It is the soundtrack of my life.”