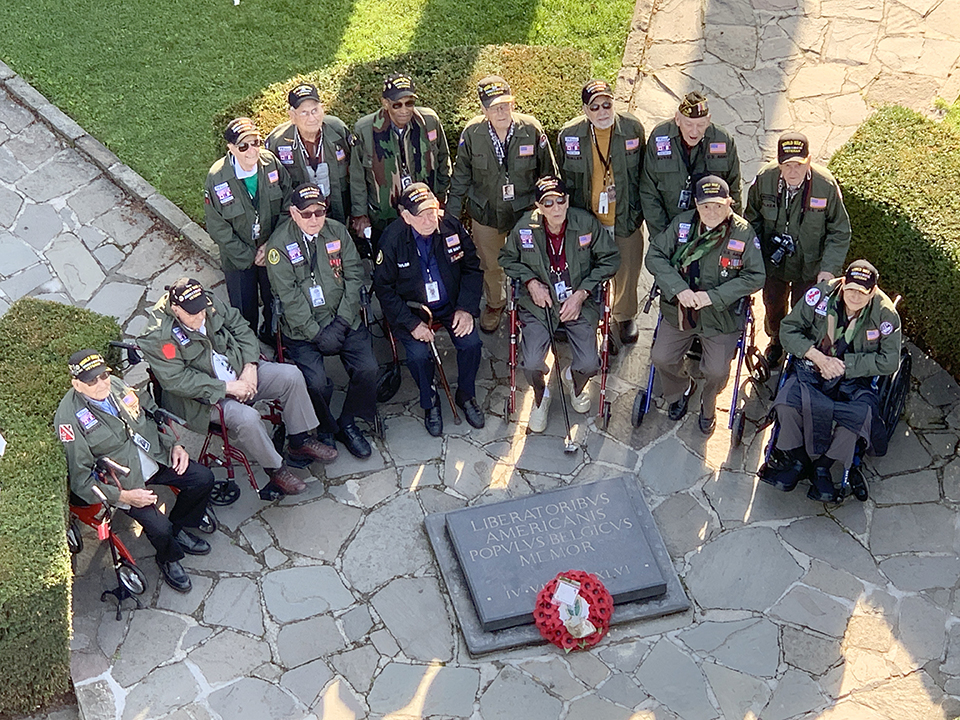 Beginning September 6, 2019 and lasting through September 14, Andrew “Tim” Kiniry, along with 13 other World War II veterans of this fighting arena, visited Belgium, Luxembourg and Germany to commemorate the explosive charge by the German Army making one last attempt to beat back the Allied Forces and the subsequent counter-attack that led to the end of the war in Europe.

Kiniry, who will celebrate his 98th birthday on November 15, resides in Minotola and is a volunteer at the Millville Army Air Field Museum. A couple of years ago, he participated in the Museum’s Veteran Interview Project, and largely due to that, the World War II medic was asked to travel to Europe for the 75th Anniversary of the Battle of the Bulge. In addition to Kiniry’s duties with the 45th Evacuation Hospital in Belgium and Germany caring for soldiers, his unit was charged with sorting out the worst of the patients at Buchenwald who had tuberculosis so they could be sent off to the appropriate civilian hospitals.

As the group traveled through the region and specific places and encampments at places bygone some 75 years, the veterans appeared to have a flood of emotions that brought back both the darkness of war and the joy of liberation. Perhaps most astonishing—the young and old of these liberated nations have not forgotten these heroes, and, they let them know at every turn. Organized by an organization called Forever Young Senior Veterans, it was not just a guided tour for the veterans and their traveling companions, but an adventure so powerful that it has left an unforgettable impression on each. A blog created by Sergeant Kiniry’s nephew, Gary Luderitz, allows us to follow along with Tim as he traveled Europe. Here are some excerpts:

We have arrived at Bastogne—tired! A long and winding drive through the beautiful Ardennes from Frankfurt to Bastogne by bus ends the first travel leg of some 36 hours! Stopped on the road for a lunch of weiner schnitzel and fries and later at the hotel for a quiche dinner. Yes, we are in Europe now!

Wow! What a day!! The group traveled by bus and guidance was provided by ‘Henri’ who was 9 years old living just outside of Bastogne when the German offensive began on December 16. He was brilliant! Rich with details and stories about the battle, the individuals like Eisenhower, Generals Bradley, Patton and Montgomery and the strategy behind the outcomes. From the Hotel Melba in Bastogne we traveled northeastward stopping first at Henri Chapelle American Cemetery and Memorial near La Clouse. A moving display of reverence for fellow soldiers—57 acres with remains of 7,987 American soldiers.

By early afternoon, we arrived in Eupen, home—during the war—of the 45th Evacuation Hospital. We found the old high school that served as the hospital and served as home for Tim and his hospital unit for some 3 1/2 months during the war. As Tim entered the courtyard he was filled with emotions, celebrating with elation and remembering with tears, coming back to this place where so many casualties demanded the life-saving services of his unit. We traveled further toward the east to the Baugnez crossroads near Malmedy where 87 American soldiers were executed by a misguided order to German soldiers on December 17, 1944.

Further east, we stopped at Wereth, near St. Vith, where 11 African American soldiers were horrifically executed by German SS guard, also on December 17.

At each of these places our veterans received smiles, handshakes and hugs and requests for photos and autographs and information. It was moving to see first-hand that Belgium has not forgotten the sacrifice that these and other American soldiers have made.

Yet another incredible day! Images and memories of the war are everywhere here in Bastogne! After a 7 a.m. breakfast we boarded a bus to visit the Mardasson War Memorial, which commemorates the siege of Bastogne that occurred from December 20 to December 27, 1944. Some 8,000 American soldiers were trapped in Bastogne and surrounded by German forces. When the Germans demanded a surrender, General Anthony McAuliffe famously answered “Nuts,” otherwise interpreted as “go to hell!” The memorial highlights each state in the U.S. and each military unit with stone carvings. Some 77,000 casualties were incurred during the battle. Nearby, the 101st Airborne, which made up the bulk of the forces in Bastogne, were honored with a hand carved stone eagle.

By 11:30 a.m. we were en route to the Office of the Mayor of Bastogne, where each man was presented with a medal commemorating his service at the Battle of the Bulge. The presentation was conducted by the Mayor along with his staff, and representatives from the U.S. Embassy in Belgium. The thanks and deep appreciation that blanketed these veterans some 75 years on was deeply expressed over and over. Indeed, it was stunning! To remember a cause fought so long ago said so much about this city and this country. It continued to bring us all to the edge of tears. The day wrapped up with a visit to the “barracks and headquarters” where General McAuliffe issued his famous call for surrender. Belgium military support teams have preserved the barracks meticulously as they existed during the battle; and they have collected and displayed an enormous quantity of wartime articles and equipment. What a show! That included refurbished tanks—American, British, Russian and German—tank destroyers, half tracks, amphibious vehicles, cargo trucks, artillery trucks and on and on. The Belgium people know that this battle saved their nation and they have preserved it for the education of future generations and to commemorate the sacrifice.

Tim Kiniry was a Superstar again today. He was interviewed by the U.S. Embassy staff, and a Belgium radio team. He was brilliant, as before. Tourists and residents came up to meet Tim and the other men, shaking their hands and thanking them for their service.

SEPTEMBER 10: TO LUXEMBOURG AND BACK!

A crazy day to be sure. First to Sadzot to visit a memorial for a devastating mortar location. A very rural location. But while we were there a local farmer and his wife saw us and invited the entire bus to use their very rustic home for use of their bathroom. Continues to be absolutely amazing—the reverence/honor that this country shows these veterans. Blown away!

Visited a crash site of a B24 (known as the Liberator) and a memorial to the five soldiers lost in that crash. From a hillside nearby in Dinant, Henri, our guide who was nine at the time, was able to watch the Battle of the Bulge unfold in the fields and city below.

Moved onto Ettelbruck, after lunch, in Luxembourg. Visited the home where one of our veterans was holed up before shelled and capture by the enemy. The vet has corresponded with this family for the last 75 years. Brought a flood of tears.

SEPTEMBER 11: THE LONG RIDE TO MUNICH

Mostly a travel day where we said goodbye to our four-night stay in Bastogne and to Belgium. I cannot say enough about the Belgium people and the honor they showed to our WWII veterans. At every turn, a greeting, a hug, a smile, a look of wonder, of thanks. Each veteran wore his WWII cap and a jacket that showed his unit and service medals so they were easy to spot. This was a trip that could not have risen to a level of recognition without the advance arrangements of Forever Young Veterans; but would not have been as overwhelmingly special without the wonderful extemporaneous outpouring from the Belgians. We will miss their incredible hospitality. By 8 a.m. we were on the bus. First stop: Luxembourg City and the Luxembourg American Memorial Cemetery. This is where thousands of American soldiers are interred, including General George Patton. A solemn and peaceful and beautiful setting. But today, these 14 veterans were honored in several ways. They were greeted by the chief officer of the memorial, the U.S. Ambassador to Luxembourg and ranking representatives from the Luxembourg Veterans Friends Assembly. A silver medal of honor was presented to Tim Kiniry and each of the other 13 veterans along with a certificate of commendation. The Ambassador presented each veteran soldier with a magnificent special coin from the office of the U.S. Embassy. Such a coin can only be issued by the Ambassador from the country in which he serves. It was an extraordinary honor.

On behalf of his fellow veterans, Tim laid a wreath in honor of their fallen comrades in the cemetery while the Star Spangled Banner and the Luxembourg were played as a salute.

We found the people of Luxembourg to be as warm and honorific as the Belgians. Who from the States would know this without being here to experience it! Indeed it would be something for all Americans to see, as these countries are unwavering supporters of America and with rooftop calls acknowledging the sacrifice it took to liberate them.

On the long ride, Tim opened letters from home. He was stunned at how many people knew of his trip and took the time to write.

The rest of the day was nine-hour, 370-mile bus travel to Munich. Arrived at about 7:30 p.m. Tomorrow—Dachau.

A solemn day. A visit to Concentration Camp Dachau showed competing emotions. Disgust coupled with pride in liberating this camp and other camps like it. Some 32,000 human beings died at Dachau, with most deaths coming in the last year or two of its operational existence. While Dachau had crematories and gas chambers, it seemed to be more of a convenient way to reduce those who were burdened with illness or who had already died due to poor sanitary conditions. Other camps served to provide more voluminous exterminations. Tim Kiniry worked at Buchenwald for several weeks beginning in April 1945 treating critically ill patients, many with tuberculosis. In fact, he was at Buchenwald when the announcement came that the war in Europe had ended. Some 56,000 had died at Buchenwald.

Following Dachau, it was an afternoon of sightseeing in Munich. We saw Hitler’s office building, the famous Munich Glockenspiel, a pub from the 1300s, and the building where Hitler joined the group that he’d later lead into Nazi domination in Germany.

It was a three-hour trip today from our Munich hotel to the German Alps to see Hitler’s famous hideaway and retreat. In the early 1940s Hitler’s Nazi party built several retreats for their German leaders, including Hitler, Goebbels and Himmler. Those homes were destroyed by Allied bombing in the “44 and 45,” but the bombs did not seriously damage the nearby Eagle’s Nest, the mountaintop retreat where Hitler would occasionally meet with important leaders. Being afraid of heights, he rarely visited the location and spent no more than 15 minutes there when he did visit.

Today, the site is a simple restaurant with magnificently beautiful views of the Alps and valleys below. The weather today was beautiful and many tourists took the time to make the steep, 20-minute bus trip to the top, including Tim and our veterans. And, they were rock stars! People young and old asked for photo opportunities and selfies.

We moved on to a brief visit to the bunkers where Hitler and his cronies holed up as the Allied forces closed in early in 1945. It was in this set of bunkers that Hitler and his fervent Nazi followers planned their strategy to fend off the Allied charge even as the facts showed that the Nazis were defeated. Hitler took his life here on April 30, 1945. Seven days later the German Army, via General Alfred Jodl, surrendered.

Munich to Atlanta tomorrow, then on to Philadelphia in the evening. See you all back in the States! n