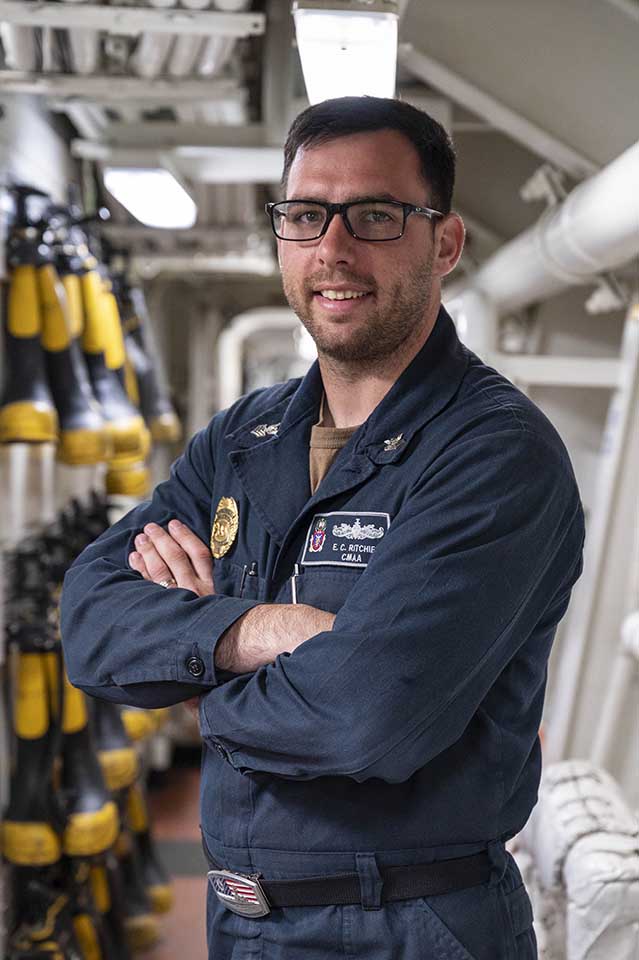 PEARL HARBOR – A 2010 Cape May Technical High School graduate and Millville native is serving in the U.S. Navy as part of the world’s largest international maritime warfare exercise, Rim of the Pacific (RIMPAC).

Petty Officer 1st Class Edward Ritchie is a master-at-arms aboard USS Sampson, currently operating out of Everett, Washington. A Navy master-at-arms is responsible for law enforcement and force protection in the U.S. Navy.

Today, Ritchie uses skills and values similar to those learned in Millville.

“My dad taught me the importance of hard work and dedication, which are invaluable to military service,” said Ritchie.

As the world’s largest international maritime exercise, RIMPAC provides a unique training opportunity that helps participants foster and sustain cooperative relationships that are critical to ensuring safety at sea and security on the world’s oceans. RIMPAC 2022 is the 28th exercise in the series, which began in 1971.

The theme of RIMPAC 2022 is Capable, Adaptive, Partners. The participating nations and forces exercise a wide range of capabilities and demonstrate the inherent flexibility of maritime forces. These capabilities range from disaster relief and maritime security operations to sea control and complex warfighting. The relevant, realistic training program includes gunnery, missile, anti-submarine and air defense exercises, as well as amphibious, counter-piracy, mine clearance operations, explosive ordnance disposal and diving and salvage operations.

“The warfare games being played during RIMPAC are extremely intricate,” said Ritchie. “They play a huge role in continuing to develop inter-operability with our allies.”

Serving in the Navy means Ritchie is part of a team that is taking on new importance in America’s focus on rebuilding military readiness, strengthening alliances and reforming business practices in support of the National Defense Strategy.

“The Navy provides a maritime presence that benefits us and our allies,” said Ritchie. “What we do with presence and deterrence is essential for global commerce to operate unencumbered.”

With more than 90 percent of all trade traveling by sea, and 95 percent of the world’s international phone and internet traffic carried through fiber optic cables lying on the ocean floor, Navy officials continue to emphasize that the prosperity and security of the United States is directly linked to a strong and ready Navy.

According to Chief of Naval Operations Adm. Mike Gilday, four priorities will focus efforts on sailors, readiness, capabilities, and capacity.

“For 245 years, in both calm and rough waters, our Navy has stood the watch to protect the homeland, preserve freedom of the seas, and defend our way of life,” said Gilday. “The decisions and investments we make this decade will set the maritime balance of power for the rest of this century. We can accept nothing less than success.”

“I am extremely pleased with the travel opportunities I’ve been afforded during my career,” said Ritchie.

During RIMPAC, a network of capable, adaptive partners train and operate together in order to strengthen their collective forces and promote a free and open Indo-Pacific. RIMPAC 2022 contributes to the increased inter-operability, resiliency and agility needed by the Joint and Combined Force to deter and defeat aggression by major powers across all domains and levels of conflict.

As a member of the U.S. Navy, Ritchie and other sailors know they are part of a legacy that will last beyond their lifetimes.

“Serving in the Navy allows me to provide for my family and support my country,” added Ritchie..

Additional information about RIMPAC is available at cpf.navy.mil.