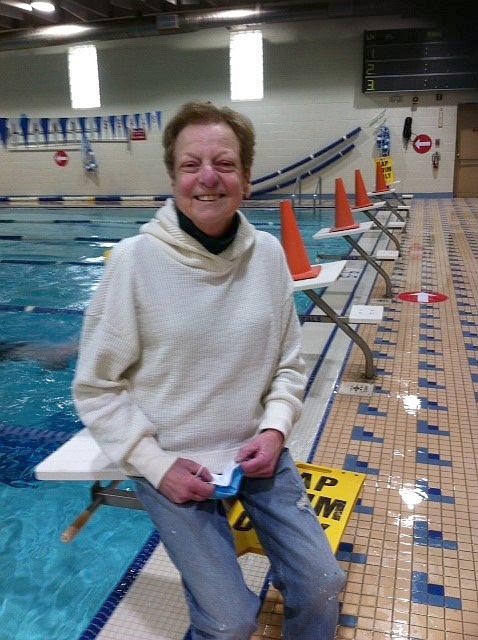 Diane Tucker underwent a double lung transplant on August 9. Earlier this month, she achieved a milestone when she swam a mile at the Cumberland Cape Atlantic YMCA’s Kontes Family Pool.

Diane Tucker, Ed.D., a Pittsgrove resident in her 60s, has been a swimmer throughout her life. Still, the mile she swam earlier this month was probably the sweetest ever. She accomplished this feat at the Kontes Family Pool at the Cumberland Cape Atlantic YMCA, just eight months after a double lung transplant.

Tucker has been part of the YMCA since 1978, when she worked as an aquatic director, assistant camp director, and swimming coach. She additionally enjoyed a full career in education as an elementary school teacher, vice principal, and principal, the latter two positions at Sacred Heart High School. She has also been an adjunct instructor at Salem Community College and at Rowan University. She is a Rowan graduate and earned an Ed.D. in Educational Leadership from Walden University in 2016.

Throughout her professional career, Tucker continued to swim, both as an instructor and competitively.

“I swam at competitions in this region with a group of Master swimmers at the Y, plus ocean swims, till 2015,” she said. That year marked the beginning of her battle against lung disease. This started with a persistent cough but progressed until her lungs functioned at only 20 percent. By then, this courageous patient was being treated at the University of Pennsylvania, which she credits with providing excellent care. Tucker was also using supplemental oxygen in increasing amounts.

“By last year, breathing was tough for me: it got harder and harder,” she admitted.

It was eventually determined that transplants were her best option. Tucker underwent extensive testing to qualify and committed to a rigorous regimen of physical therapy to prepare for it. To keep up her sport, she swam in a friend’s pool, pulling her oxygen tank in a floating cooler.

“To swim made me feel better, both physically and mentally,” she observed. She continued PT after the surgery, which took place over eight hours on August 9.

“It went well, and my recovery was good,” she recalled. “Within three months, I was told I could get back into the water.”

Her first swim after the transplants was 12 laps at the YMCA. Three months after her surgery, Tucker’s physicians gave their approval for her to swim unaided at the Kontes Pool.

“As I was recovering, especially in this time of COVID, I spoke with the Y staff and my doctors,” she said. The Y’s safety protocols are excellent, and everyone should feel safe there. Plus, the Y takes a personal interest to make sure that everything is okay.”

Tucker achieved her mile swim on March 5. Senior program director Jennifer Helm said, “Diane is a real role model for us. We all congratulate her.”

“Swimming a mile is a huge milestone for me,” Tucker said. “I can’t thank the Y enough. It has been a big part of our family for a long, long time.”

Her husband, Steve, was a Y camp counselor for many years, and their son, Steve, progressed from being a Y preschooler to helping with aquatics coaching at the YMCA. He and his wife, Courtney, have a son, Reece.

“Reece is my inspiration,” noted his grandmother as her miraculous recovery continues. “I thank the Good Lord, my lung donor, and my family every day. I am so grateful to have another chance at life.”