CU cofounder is remembered for his tough exterior—and his love of trees. 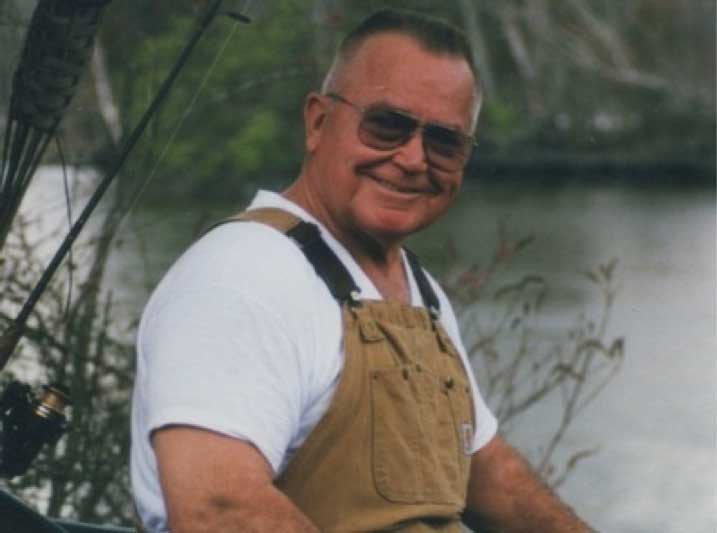 Although Berwyn’s River garb was Carhartt bib overalls and a T-shirt, at events and local meetings Berwyn always wore a dress shirt and jacket. When he had his first grandchild a number of us gifted him with a mini-pair of Carhartts.
by J. Morton Galetto, CU Maurice River

Berwyn Kirby was one of a kind, and I love to reminisce about the burly fellow who founded CU Maurice River. I remember our first meeting. It was near the confluence of the Manumuskin and Maurice rivers and the out-running tide was full throttle. This is where my husband and I first encountered the famed Berwyn Kirby. CU’s co-founders were Berwyn and Donald Fauerbach. The original CU members had organized an inner-tube paddle on the Manumuskin, but as they entered the main river the tide had switched. Paddling an inner-tube is no easy task and we offered to lash them together and tow them to their take-out point at Fauerbach’s.

When we offered to tie Berwyn’s tube to the rest of the flotilla he declined with a grunt of sorts and a twinkle in his eye. At that point I had no way of knowing that I would see this look many more times in the future. He was wearing his iconic Carhartt overalls with a white tee, and he was about 50 at the time. His biceps were tree trunks and he kept up with the flotilla using sheer muscle power for what I would estimate to be a two-mile trip.

Berwyn passed away in 2020 at 84 years of age; stories about him abound. He was rightfully proud of his football career in high school and at Penn State. But more than anything he was proud of his education and his oration abilities. He built his home on the Menantico and it is sided with planks that retain their rough cut, a testimony to his love of trees. He knew every board and didn’t mind telling you so. He used to open many of his advocacy speeches with “I’m not a tree-hugger.” But I knew better. In spite of his brawn and projected gruff spirit, he was also a pussycat especially when it came to the love of his life, Kay.

He raised his two daughters on the forested property and took pride in defending it from trespassers, especially off-road vehicles. Berwyn was a teacher and was often given the students who had behavioral problems, so he knew how to manage troublemakers. On the river this earned him a reputation as the Menantico Troll. It surely got him into difficulty at times as he confronted trespassers with possibly a bit too much intensity. He sported a drill sergeant’s flat top and a don’t-mess-with-me aura. He could cast a glance with a smile that would freeze your blood. Sensible people would enter his driveway for only a few yards and then retreat. But those who chose to pass the 50 “No Trespassing Signs” and “Turn Around – This Means You” ending at his house might find more than they bargained for. Berwyn and I grew to be close friends and yet I would never think of going to see him without calling first. That’s just good manners—and safer! Berwyn could talk about the Menantico like a scholar or a romantic; his love for his property and the river ran deep. His words were articulate and strong. He would say that words were powerful, but that sometimes you had to take out the bazooka in your back pocket. So we weren’t always on the same page but we were on the same mission.

His high school and college football career were legendary. He owned a bar called Club 31 that was named for the Millville Thunderbolts’ 31-game winning streak. Millville is a sports-minded town, and the Thunderbolt Club held Berwyn’s athletic prowess in high regard.

Classmate Joanne Murphine and Berwyn were both selected as Best Athlete in their class and both were original Trustees of CU Maurice River. Joanne relayed to me that Berwyn and his brother Ellis were also expert tap dancers and entertained classmates on stage.

“I suppose no one dared to tease them?”

“No way,” Joanne replied with a laugh and a very knowing look.

I asked him about these dance skills and he told me—with that special twinkle in his eyes—that he and Ellis were a pair, and that tap dancing earned them money in their college years—plus a few dates. He mentioned their being grunions and pool boys in California. I chose not to ask for details, which were not likely forthcoming anyway. But for all his brawn he was a gentleman too. Berwyn always told the truth as he saw it—a straight talker. However, in my humble opinion when he said he was not a tree-hugger he was lying, except possibly for literally.

He was a big softie for a flying squirrel that lived in his house for a few weeks before wearing out its welcome. I told him his friendship would come to a bad ending, and Berwyn protested, “But he’s really a little character, he’s so cute.”

“Yeah, right, until he becomes mischievous and brazen,” I said, suggesting he end the friendship before the relationship deteriorated. Too late…

Berwyn understood the connection between many things in nature and shared those feelings often. Honestly, he knew the squirrel would have to be evicted. That squirrel belonged in the trees.

This story brings me to a few succinct points.

What Berwyn knew, because he was a “tree hugger” in spirit if not in fact, was that trees do an amazing variety of things for us and need to be protected. They hold soils and prevent erosion. Trees offer shade, protecting ourselves and other animals from solar radiation. Trees provide noise and wind attenuation, as well as shelter. We build our homes and furnishings from their lumber. Canopies of trees are a physical filter of dust and pollutants in our air. Each tree removes 3 and 3/4 pounds of particulate from the air. Many trees have medical properties, maybe a great topic for a future article. Treed properties have a greater resale value. Animals rely on trees for habitat. A mature oak supports 543 species of moths and butterflies, and an endless number of animals. Black cherries support 456 lepidoptera species. The young of many bird species rely on caterpillars and insects as a food source. Cherries are eaten by 54 different bird species.

Research is demonstrating their benefit for the human spirit and body. Within minutes of being in a forest and green space, your blood pressure drops, your heart rate decreases, and your levels of stress are reduced.

Trees provide oxygen by the process of photosynthesis; they absorb carbon dioxide and produce the oxygen we breathe. The absorption of the carbon dioxide they store slows the rate of global warming. There are many statistics about the rainforest being the lungs of the planet. Sometimes I think we talk about the rainforest to distract ourselves from our own responsibility to forests here in North America. Honestly, the rainforest is an unusually large carbon sink and the estimates about our demise without it are disconcerting to say the least. But it does not eliminate our accountability to trees here at home.

I’ve intentionally kept my story long and my facts short, hoping we might each retain my key point—just as Berwyn was my friend, trees are our friends too.

So let me be clear: I am a tree-hugger, and proud to admit it. One of the most important roles that trees play is a link between the present and the past. They are the longest living species on earth. And when I hug a tree, I get a twinkle in my eye. And in spite of Berwyn’s denials, I know he was secretly a tree-hugger too.