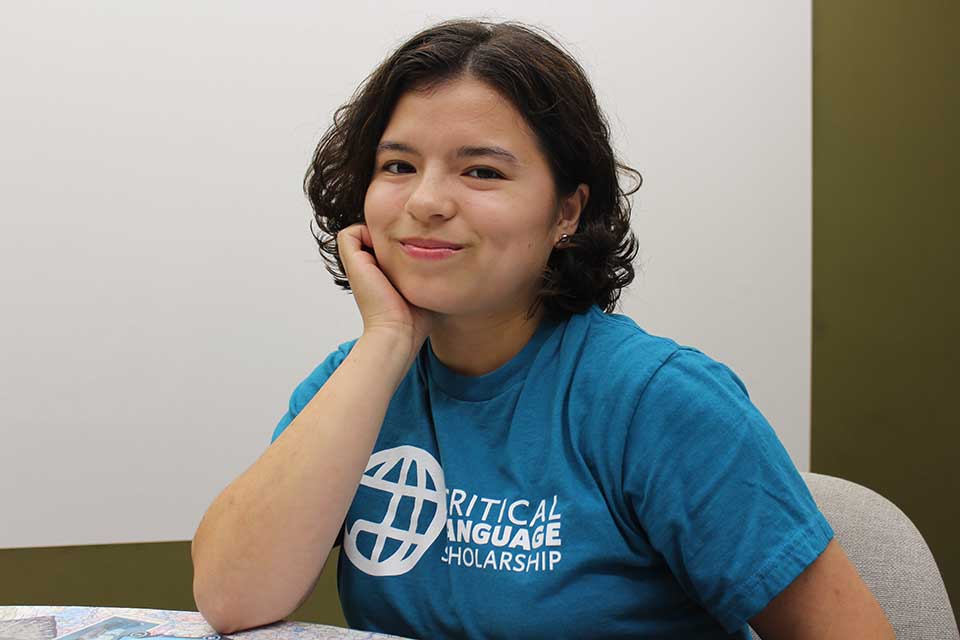 Alexandra Dionisi, a 2020 graduate of Rowan College of South Jersey (RCSJ), is participating in a prestigious language study program after being awarded a scholarship from the U.S. Department of State. Dionisi was one of nearly 700 American students selected to receive the Critical Language Scholarship (CLS), which was created to help broaden the United States’ influence across the globe.

“The Critical Language Scholarship program was established in 2006 by President George W. Bush,” Dionisi explains. “He wanted to increase awareness and increase the number of American students studying languages that are deemed as critical to U.S. national security and U.S. international relations.”

“I enjoy studying different languages because it gives me different perspectives on global issues,” Dionisi said. “Also, I can communicate with so many more people and meet them on level ground. I’ve heard a saying that when you speak to someone in their native language it’s like communicating with their heart.”

Dionisi, who is currently a secretary for RCSJ’s Cumberland campus Adult Basic Education program, offered through the Career & Technical Education division, selected Indonesian as her course of study. Other languages offered include Swahili, Urdu, Korean, Persian and others.

“I chose Indonesian because I’m a Filipino-American,” said Dionisi, who is also of Italian descent. The proximity of the Philippines to her mother’s birthplace and her own interest in the Indonesian community that lives throughout the Delaware Valley, were additional reasons why she selected the language.

How Dionisi found out about the program is a bit Shakespearean. “I was watching a production of Hamlet at Rowan University, and I saw a poster on the wall (about CLS). It looked really interesting,” she shared. “So later that night, I began my application.”

The Millville resident, who earned dual degrees in paralegal studies and Spanish at RCSJ—Cumberland, had lofty reasons for wanting to participate in the government-funded program.

“I want to become an immigration paralegal and help people who are immigrating here,” Dionisi revealed. “And learning Indonesian will help me with Indonesian immigrants and other people from Southeast Asia.”

Dr. Maud Goodnight, who recently retired after 41 years of exceptional service at the College, and Heidi Dugan, Bridgeton Public School teacher and longtime friend, recommended Dionisi for the CLS program.

“Her gift for languages and drive to reach her goals are inspiring,” Dugan said of Dionisi. “There is no one better suited for an intensive language and cultural exchange program like this one.”

“I’ve enjoyed my CLS experience very much,” said Dionisi. “In our classes, we strengthened our Indonesian language skills in the four modes of communication—reading, writing, speaking and listening. I can do many things from casually conversing with my online friends up to giving a formal presentation and fielding questions.”

At RCSJ, Dionisi was a peer mentor with Las Vias and a tutor and a member of the Latin Club and Phi Theta Kappa honor society. When asked about her experience being a student and employee, she eloquently expressed her thoughts in two languages, first Indonesian and then English: “I am happy about having studied at RCSJ. There are many friends of mine here and I learned many things in the classes. In addition to that, I am more prepared for the workforce. I have worked here during these past two years with college students of different backgrounds. Thank you RCSJ for supporting me.” n