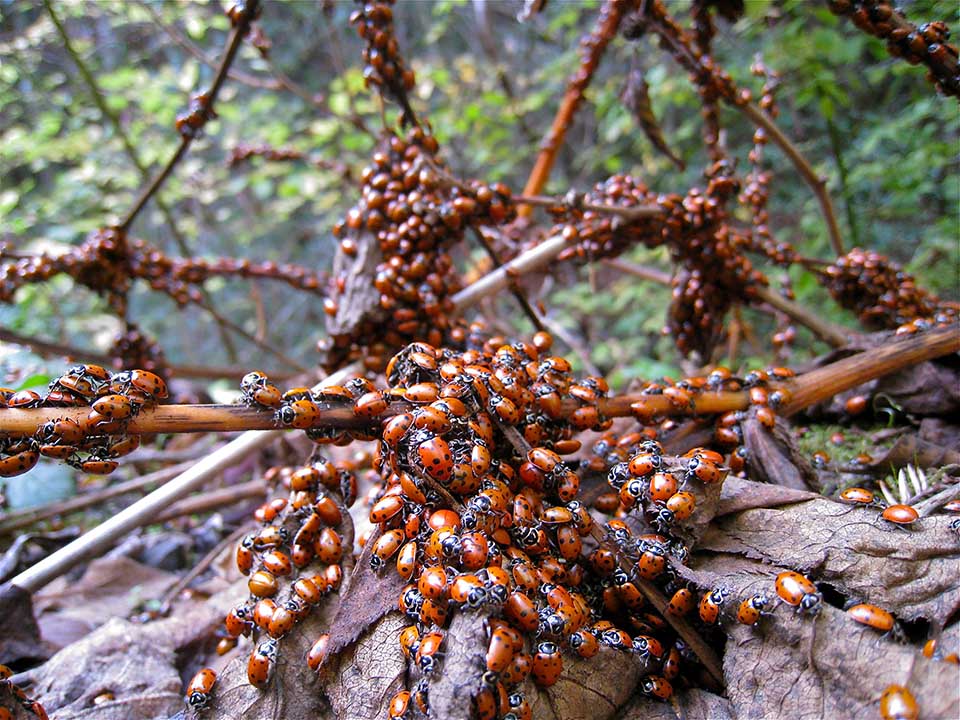 When I embarked on this article about ladybugs I naively thought it would be a sweet story of the lovely beetles that I was so very fond of in my youth. I would relay the origin of the verse “Ladybug, ladybug, fly away home,” but then I remembered that it continues, “Your house is on fire, your children will burn.” It was beginning to feel a lot like the death of innocence. And trust me, it gets worse before it gets better. At any rate the origin of the expression, according to Farlex’s The Free Dictionary, is that farmers in part of the “English-speaking world” chanted this to their beloved crop protectors, the ladybugs, before burning a field after harvest. Wow!

I also got a few calls about ladybugs invading people’s homes. That should have been the next clue suggesting that this wasn’t going to be all rosy.

First, let me relay a little natural history about one of our favorite insects. Ladybugs have a number of other common names such as lady beetles and ladybird beetles, but they all belong to the Coccinellidae family. Their lifecycle begins with a very small navy bean-shaped yellow egg, about 1.0 mm. An adult lady beetle deposits its five to 30 eggs in a clutch on the underside of a leaf or along a plant stem. Over a three-month period from spring to early summer she can lay as many as 1,000 eggs. Generally she places them on a plant with aphids, the preferred food of both the adult and larval stage of this insect. The female’s productivity is directly related to how much sustenance she has available.

About one or two days before hatching, the egg takes on a gray hue. In two to 10 days a six-legged ridged larva emerges as a soft-bodied beetle that hardens as it dries. The larva eats about 30 to 75 aphids each day and reaches maturity in two weeks’ time. It may also consume scale insects, mites, adelgids, and insect eggs.

As the larva grows, its skin/cuticle needs to be shed to accommodate its increasing size. This molt will take place four times, with a larger larva emerging after each event. At the fourth instar the larva attaches to a plant and changes into a pupa with a hard casing, within which the larva pupates or metamorphoses into its adult form.

In the pupal stage the motionless lady beetle appears yellow to orange with black markings. Histoblasts, or tissue-producing cells, control this seven- to 15-day transformation. Initially, the adult insect will be soft when the case breaks open and it crawls out, but its cuticle will harden over a day’s time. The elytra, or wing covering, is pale yellow and translucent upon emergence, yet as it hardens the deep hues normally associated with the 4,000 to 5,000 or so species in its clan begin to appear.

Thus the four stages in the lifecycle are embryonic, larval, pupae, and finally the adult beetle. The adults will feed on soft-bodied garden insects from spring to fall until winter when they will hibernate in aggregations. They find refuge in rotting logs, under rocks, and, yes, in houses (the Asian lady beetle; read on). After overwintering, adults become active in March or April, mating May through June, with a lifespan of about one year. Overwintering strategies can vary between species, with some remaining in a larval form.

These tiny beetles are beneficial insects that essentially act as a bio-control in your garden. Given their propensity to eat garden pests an unsung genius began singing their praises in the late 1970s, and Multicolored Asian Lady Beetles (Harmonia axyridis) were introduced into the United States by the USDA as a beneficial predator. In retrospect this brilliance seems to have dulled considerably; the introduced species did not play well with natives. The problem was compounded by an accidental reintroduction into the port of New Orleans. In 1992 they were first reported on a northbound trajectory in North Carolina (1992).

Remember our little expression “ladybug, ladybug”? Well, by the 1980s you might say our house was on fire when the established Asian populations began to have dire impacts on our native species of lady beetles, displacing them. To be accurate they are not the only reason for declines of native lady beetles nor are they the only exotic lady beetle species. Aside from these invaders, the lack of leaf litter, dead logs, and other habitat provisions have affected our resident beetles. Additionally, insecticides are severely impacting many insect populations. Specific cause/s of their decline are unknown (COSEWIC 2016).

In part the impetus for this story was people complaining about swarms of Multicolored Asian Lady Beetles appearing around their doors and windows and, yes, entering their homes, likely from southern-facing exposures. The insects are trying to hibernate during cold weather. Fortunately they pose little risk to the homeowner beyond being a nuisance, although there are some reports that they can bite and they do secrete a foul-smelling odor. However, they do impact our native ladybeetle due to a propensity for eating their eggs. As a result of all these combined negative effects, a number of people are now reporting “native lady beetles” locations because of their increasing rarity.

There are over 400 species of lady beetles (family Coccinellidae) that are native to North America. The nine-spot lady beetle, often referred to as C-9 by those in the know, was once common across the United States and southern Canada. In 1989 New York designated C-9 its state insect. At that time it was considered to be the most common and important native species of ladybeetle. By 2007 it had declined through most of its regions by 68 percent and today it is extirpated in New York and rare throughout its historic range. In fact the last collected sample was by Virginia school children in 2007.

In 2015 New York State listed it as a Species of Greatest Conservation Need. New York’s Cornell University has had a Nine-spotted Ladybug Restoration project since 2008, whereby they sell larvae to citizen scientists to help reestablish populations. Cornell and cooperating organizations are also educating the public on how to identify native species of lady beetles.

North Dakota Cooperative, in concert with other groups like the Lost Ladybug Project, Cornell U., and the USDA, hope to locate native species in order to see what conditions result in success versus demise. This is a project in which citizen sightings play a major role, and children are especially helpful. While most news reports on youth efforts seem to be spanning 2008-17, I’m not clear on how active students are today. However the website lostladybug.org can provide you with lots of information about lady beetles and citizen involvement. New York State was still active in 2017 and 18.

Cornell has kept up their efforts in 2021. In fact they reported some very interesting steps they had to take in their rearing methods of native lady beetles during the pandemic, when the staff couldn’t monitor them in the same fashion as before. Rearing areas were developed wherein the lady beetles would not be as reliant on monitoring and manipulation.

The goal of this project is that someday the ladybugs might be able to—yes, fly away home.

Citizen Scientists to the Rescue

So how do you tell an Asian beetle from a native beetle? There are many websites with discussion on the topic. The most popular method involves looking at the pronotum, or segment just below the head. Asian beetles have a white pronotum with black spots that make an “M” or a “W” shape, depending on the orientation in which the beetle is observed. A number of the native species are said to have white cheeks on their head.

Asians are also larger than our own beetles and come in many colors, as their name suggests. There are a lot of variations in natives as well; they tend to be a deep orange, almost red, with black spots. In addition there are black species with orange spots. South Dakota has an identification sheet displaying about 80 native types. They all vary a great deal but none has a white pronotum with the M or W.

Diagram of native ladybug shows the pronotum, a segment useful for discriminating between this insect and a Multicolored Asian Lady Beetle, shown below with its pronotum M/W-shaped marking.