Reality TV has given WheatonArts glass studio director a platform to use his talent in helping troubled youth. 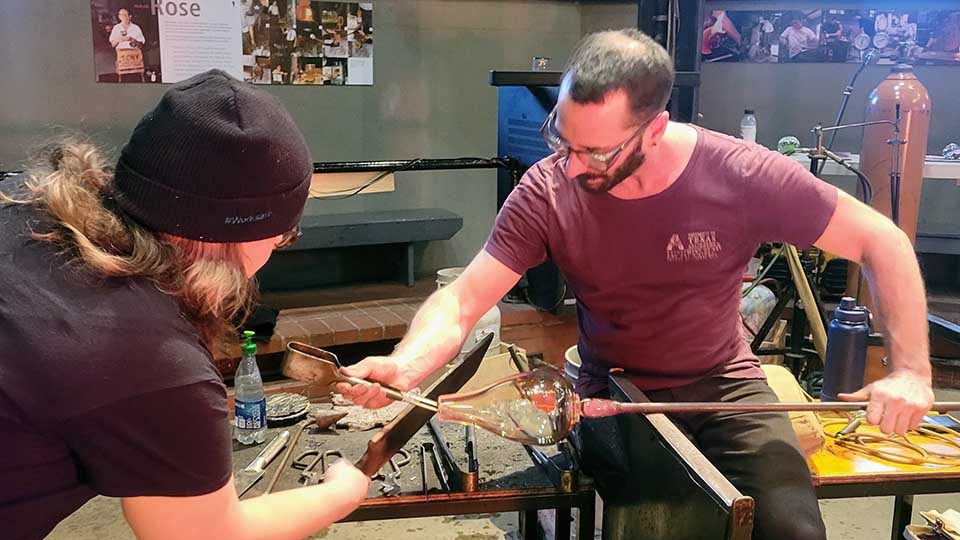 If glass is magic, then Alex Rosenberg is Millville’s newest magician. Rosenberg, 41, has spent the last year as glass studio director at WheatonArts. A resident of Philadelphia, Rosenberg might look familiar to anyone who has spent time on Netflix. He starred in season one of the streaming site’s show, Blown Away, a reality show that pits 10 glass artists against one another for a $60,000 prize package with an artist residency at Corning Museum of Glass in Corning, NY.

It’s probably fair to say the show changed his life for the better, though he certainly wasn’t expecting it.

“It gave me this giant access to a giant audience. It really changed my life in that way,” he said.

The show films in Hamilton, Ontario, and recently released its Christmas season, tapping him to appear again.

“I get recognized on the street, it’s crazy,” said Rosenberg. “I don’t know why [the show] did so well. I think the pandemic might have something to do with it.”

Rosenberg has an impressive resume, including a Master of Science in visual studies at MIT. His work has been shown as far away as Denmark, Belgium and Venice, Italy, and he has been a visiting and demonstrating artist at the Metropolitan Museum of Art in New York City. Thanks to the show, he has more than 100,000 followers on Instagram.

Sounds like a guy who has carefully planned his career path, right? Not even close.

The path that led Rosenberg to a career on TV started when he dropped out of high school in Madison, Morris County, in northern New Jersey. He developed drug and alcohol dependencies and found himself on the West Coast, living with a roommate. Rosenberg had no degree and was trying to get his life in order. He needed direction. Where should he start? His life changed on a simple twist of fate: His roommate was taking a glassmaking class.

“It was just this moment of curiosity for me,” he said, sitting in his elevated office in the WheatonArts’ glass studio, which is checkered with his work. “This material could be manipulated by a human hand, and I didn’t know that.”

A furnace heated to 2,000 degrees transforms silica sand into molten glass. In the same way, the heat from Rosenberg’s poor life choices made him search for something new. He found a love for glass, a decision that transformed his life.

From that spark, Rosenberg ended up getting his high school diploma, and went on to complete college and graduate school.

“I’m interested in the way that glass can transform people’s lives,” said Rosenberg.

Today, as glass studio director, Rosenberg is partnering with different organizations such as Glass Roots in Newark that reach out to at-risk youth. The former high school dropout hopes to help local kids change their own lives through the transformative power of glass.

“Because of my own background, I am interested in helping at-risk kids,” said Rosenberg, who is now five years sober. “When I was a kid, I was having a lot of trouble.”

“No matter how hard I tried, I just couldn’t make it work. I left. No safety net,” he said.

From there, it was all about trying to earn money somewhere as a glass artist.

“As you can imagine, I was applying for anything that would make me money,” he said.

That’s when he saw an ad on social media seeking glass artists for a reality TV show. He needed the money, though he admits he wasn’t a fan of the genre.

“I don’t watch reality TV,” he said, adding he believed it would be like some of those shows where contestants live in the same house together and bicker.

“I applied and I was chosen,” he said, and he signed a flurry of non-disclosure agreements and contracts that meant he had to sign over rights to images of his work.

If it seemed sketchy at first, Rosenberg had a great time. “What I found was that the process was fun. The crew and production company were great,” he said. “I found that it was the kind of work that I was good at and it wasn’t terribly taxing. And I did pretty well.”

As part of his job at WheatonArts , Rosenberg works closely with associate artists and sets up programs. He also spends hours in the glass house, working on projects and commissions with studio assistants. On a chilly December afternoon, Rosenberg worked with his two assistants, Jeremy Hayes and Tiffany Leps, to finish a cake plate as part of a collaborative project that he and other glass artists are working on.

“We really like working as a team,” said Hayes, smiling. “There’s a lot more we can get done.”

In glass, there are no guarantees.

“You kind of use all of your senses,” Rosenberg agrees. “There’s just a sense of timing.”

Hours can pass by, and the slightest mistake can bring it all crashing down.

“I spent two hours [working on one piece] and I sneezed. And then I had to start over again,” Hayes said, smiling. “It teaches you a lot of patience.”

Although he’s moved on to his new role in Millville, the show still ensures he is still recognized by fans. It happened most recently at a restaurant in Philly, where he was dining with his parents. His new-found fame has also generated several commissions, but Rosenberg doesn’t trade on his online fame. His Instagram popularity allows him to sell some work, too. “I don’t really push it,” he added.

It was a risk that paid off, and now he pays it back by running an Alcoholics Anonymous meeting in Camden once a week.

“I am so glad I was knocked down to a place where I got to do [the show],” he said. “It really changed my life.”

The Artist Studios, Museum of American Glass and Folklife Center at WheatonArts are closed January through March for exhibition changes. For more information, call 856-825-6800 or visit wheatonarts.org.