Deer have a way of advertising their wares and whereabouts—scents, sounds, and body language. 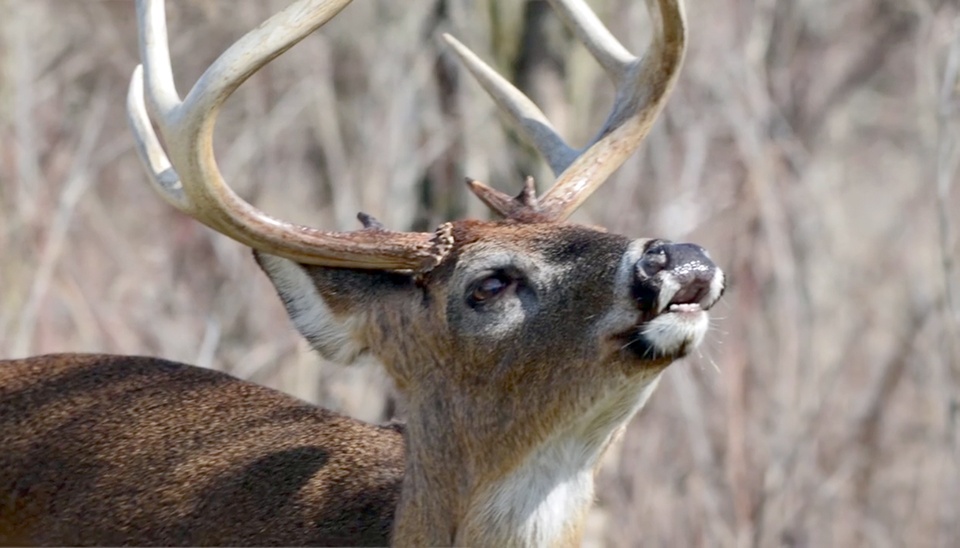 Last October I wrote an article about deer that included some aspects of their mating habits. It described mate guarding and the male deer or buck’s propensity to focus on following a female in estrus so as to insure he is the lucky suitor. During rut or the breeding season, when males spar competitively for reproductive rights over females, deer are on the move. The season begins in October and its height in our region is November 10-20. Females that are not successfully fertilized will come into estrus a second time 28 days later, offering a second chance for them to produce young.

All this moving around makes deer and drivers especially prone to road collisions. Bucks are particularly active during sunset and early morning. So slow down and stay alert. In last year’s story, we offered lots of advice in this regard.

White-tail deer are the local species here in southern New Jersey. I thought it might be fun to talk about their indicators of lust—well, fun for me anyway. Deer employ three major methods of communications—scents, vocalizations, and body language.

Deer are ungulates, meaning they are a mammal with a cloven hoof on each leg, split in two parts; you could describe them as toes or digits. Some other animals that share this characteristic are bison, cattle, sheep, and goats. Deer hooves have a very thick outer toenail layer, often described as a compact horn, and inner layers called sole horn and cuneus. Above the hoof are dewclaws. Bucks’ hooves are generally wider and longer than that of does.

Between the split of each hoof there is a scent gland. On the hind legs it lies above the back of the foot, and below the hock (sort of a backwards-pointing knee joint) there is a metatarsal gland. On the inside of the hind leg on the hock there is a larger tarsal gland. These scent glands are the love potion, leaving odorous secretions that become strong during the rut. Yves Saint Laurent, step aside; deer are advertising their wares and whereabouts.

Bucks also blaze or “rub” trees with their antlers to further delineate territory. They do this to remove the skin called velvet; however 90% percent of scrapes are made when no velvet is present. Pre-orbital glands near the eyes and forehead gland are rubbed against the tree as well. The buck will urinate for good measure and kick at the ground to leave scent from its hooves. Antlers are also used for dueling with other males, so showing off the damage you are capable of is a message of sorts: “My woods, my dames!”

Females often answer these deer communications with urine as well; think of it as love notes. Sniffing is a way to identify one another. In rut, males will curl back their lip to expose the vomeronasal organ, or Jacobson’s organ, in the roof of their mouth, and then they will hold their heads tilted back. This enables them to detect chemical signals and body fluids, especially the urine of females in estrous. Interestingly, this organ is more about getting the male in the mood than detection; it’s the nose that primarily detects.

Buckle your safety belts because evidently deer are not the only ones with a Jacobson’s organ; it is present in other animals as well. People have a small in-fold in their nose near the hard palate and some believe it to be the remnant of what was once a functional Jacobson organ. There seems to be some debate about its usefulness in humans today; most seem to agree that it does not have sensory nerve fibers. However, one group of scientists believes the presence of calcium-binding cells suggest possible endocrine activity (Wessels et al. Clinical Anatomy 2014). In other words, there may be some functionality.

Deer vocalize as well. Bucks will often grunt when chasing a female in heat. Wheezing is normally an indicator of a challenge or the warding off of another suitor. Low grunts with a snort are normally directed at subordinate males. The sound of rattling antlers normally announces a duel. This will attract other deer much like a teenage fight will attract a crowd.

Curiosity is a strong animal instinct that brings in rubberneckers in many species. Young fawns in distress will often bawl or bleat loudly, which can often draw does; this in turn can attract males. A fawn in severe distress can be heard from up to 100 yards away and is very disturbing to deer. Hunters imitate this call early in the season to lure a doe or buck, depending on their desired quarry and permits.

White-tails Unlimited defines many body movements and their meanings. Lowered ears is a threatening sign but not very high on the continuum. A dominant deer may raise a front leg and strike without serious intent, an early warning of sorts. Two males will sometimes circle each other with their heads turned to the side. If neither backs down they may rise up on hind legs as if to box, which is called a flail. If a deer lowers its antlers at this point in the exchange, things can escalate to sparring and pushing. Early in the season or with young bucks the intent may not be serious, but as the rut progresses they may charge at each other in an antler rush, and pushing can become true conflict. Ultimately, winners are dominant and losers subordinate.

When a deer senses danger it stiffens. It will bob its head suddenly in an attempt to get a predator to flinch so it can locate the intruder. Tails are used for all manner of communications. A flattened tail is used to improve camouflage. A raised tail denotes concern or trouble. A conspicuously wagging tail is displayed to keep the herd together as they escape perceived or real danger. One little tail wag is often used to indicate that the coast is clear—relax. A perfect way to end this story—a little wag and a glass of wine! n