How We Learn: Tools of a Culture

It’s not just humans that are being schooled; scientists see evidence that learning is more widespread in the animal kingdom than once thought and it helps create the cultures in which each species lives. 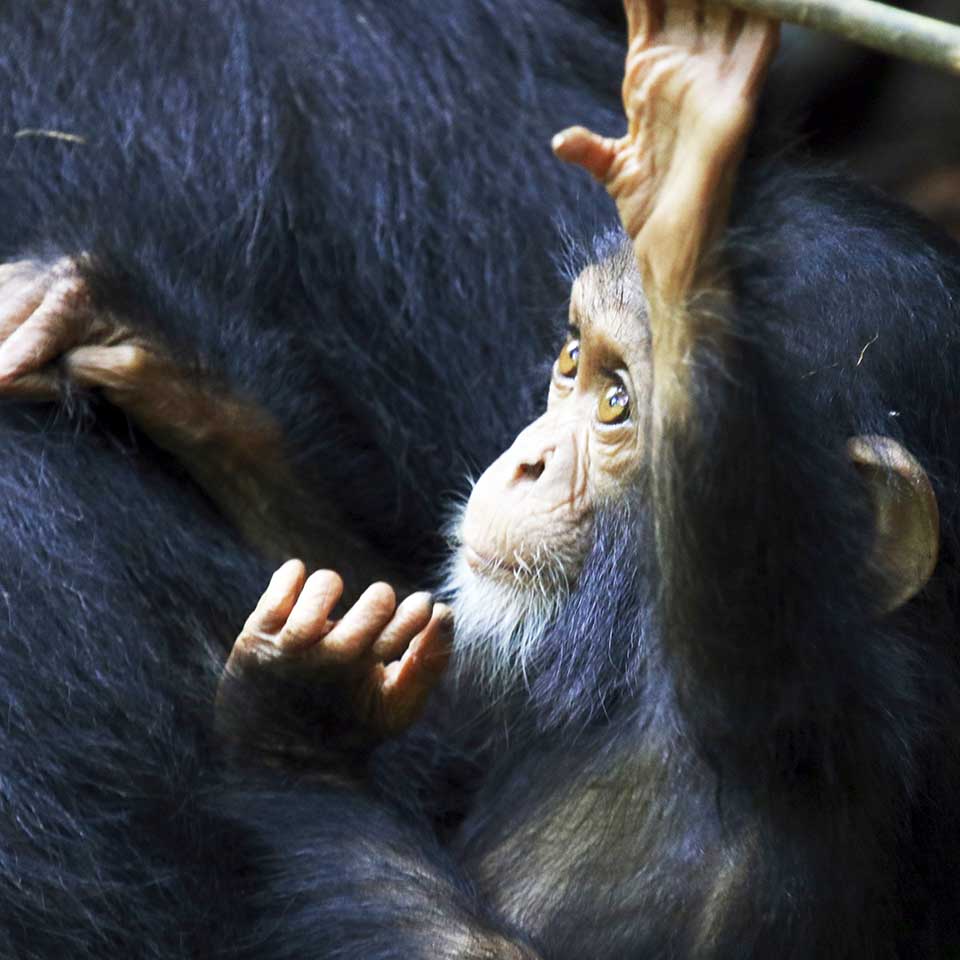 Muko, a young chimpanzee, raises its hand like a human pupil. Dr. Catherine Hobaiter, primatologist, studies gesturing in primates. Gesturing as communication is defined when the primate awaits a response, or appears to be directing the gesture toward another primate. Photo: courtesy of C. Hobaiter
by J. Morton Galetto, CU Maurice River

With students about to make their transition from the delights of summer to the culturally developed “institution of learning” I thought it might be fun to discuss non-human creatures and the way they are taught about their culture.

Recently I listened to Carl Safina read his newest book Becoming Wild. His premise is that non-human animals have culture, an attribute long regarded as an exclusively human characteristic that separates us from other animals. Today more ecologists and animal behaviorists are observing, in the respective animals they study, traits that were previously considered to be found only in humans.

In prior explorations Safina devoted a number of books to cognition and emotion in non-human animals. He contends that these attributes are universal in mammals and not reserved solely for humans. In this book he evaluates non-human animals in terms of their similarities to Homo sapiens regarding the existence of culture. He notes that the development of culture is a higher-level achievement than simply thinking and feeling; it requires a social fabric and an element of learning. And again, the assumption often has been that it applies exclusively to humans.

However, we are discovering that while not all non-human animals (henceforth animals) possess culture, many do. Researchers like anthropologists, historians, and ecologists have tended to define culture differently. And there is often disagreement on its meaning even among members of the same discipline. Safina’s working definition is: “Culture is the behaviors, habits, and even the attractions that are learned socially and passed along socially. Culture is a social thing but instinct is involved.”

Culture gives a group both identity and a shared commonality. Safina further recognizes that this ignites the age-old debate of nature vs. nurture—what is genetically ingrained in an animal and what is fostered or learned.

Truth be told the innate and learned can’t be separated, because nature gives us our capacity while nurture works with those inborn qualities to enable us to learn. When the learned aspects are interwoven within a social group a culture develops.

To give greater clarity to this Safina offers an example: “Humans have the capacity for human language—that’s nature. But the specific language we speak is entirely the product of cultural.” And in fact if a child is never exposed to any language at all, he will never speak.

In Becoming Wild Safina uses three subject species to develop his argument for the existence of culture in animals—whales, chimpanzees, and macaws. He also shares many vignettes from other species to advance his thoughts on non-human culture, all of which are compelling. For each of the three principal species, he spends time with people who study them.

Safina joins Shane Gero off the island of Dominica to listen in on the vocalizations and exchanges of sperm whales. Beyond using patterns of clicks or “codas” as sonar to find squid, they also give clarity to the group to which they belong by announcing their presence.

Safina describes their social behavior as having similarities to elephants in that they move in female-led pods and, once mature, young males leave the group. Sperm whales have a babysitting culture so their social structure is geared toward those responsibilities. The young can’t make the deep dives necessary for foraging so an older female will stay with them near the surface. Their behaviors evolve around these dependencies.

Communication and a developed language—even dialects—have been shown to exist within a pod of whales and can be unique to that pod, thus demonstrating a learned skill specific to a social group. In this way they meet the criterion for “culture.”

Killer whales have evolved to be specialists and strategists in selecting their prey. Some eat fish and will never eat mammals and vice versa. This behavior is learned from their parents—how to survive—and it evolves into a social culture. Humans may adapt to different cultures but it is difficult, and we are highly unlikely ever to become a true member of another society.

Growing up in southern New Jersey I would have a great deal of trouble fitting into a Masai nomadic group in Africa, or learning to use a blow pipe with the proficiency of an Amazonian tribesman. Influences and evolutions in behaviors occur at times but primarily we are members of a social group. A killer whale who targets mammals does not shift to become a fish eater nor the reverse. This species has evolved a culture of learned behaviors and specializations.

Safina gives a logical explanation for the distinction between killer whale mammal eaters and fish eaters. Those that prey on fish drive them together in a pod with noise and commotion. Those that prey on mammals rely on stealth for success, hunting in groups of three rather than 30. For hundreds of thousands of years they have neither mixed nor interbred; until now they would be considered separate species.

Safina’s next cultural example involves primates. Africa’s Western chimpanzees are not as obsessed with rank and dominance as groups from Eastern Africa—a cultural difference. Both are male-dominated but evidently Western males are less confrontational.

Safina tagged along with Cat Hobaiter while she was studying chimpanzees In Uganda’s Budongo forest. She is a primatologist who focuses on social behavior and communication as it relates to learning and cognitive evolution.

Hobaiter and other primate biologists are sharing their data, enabling them to make comparisons between bonobos, chimpanzees, and gorillas. A bonobos, a primate similar in appearance to a chimpanzee, has a female-led society in which dominance is used to suppress violence rather than incite it. This results in a more peaceful culture, unlike the Eastern African chimps.

Hobaiter is also gaining a greater ability to decipher ape communication by understanding the ways in which dominance is displayed differently by these different species. Gestures, facial expressions, body posture, and calls are combined to communicate within social groups. Hobaiter’s team hopes to develop some insights into the evolutionary origins of language by studying the apes’ cultural communications.

In the Peruvian rainforest along the Amazon, Safina learns about the intricacies of the third example, macaws, at the Tambopata Macaw Project with researchers Don Brightsmith and Gaby Virgo. Over a number of years juvenile macaws learn from their parents how to fashion tools. He relays that crows and some other birds also make use of tools. The macaws pass down traditions, navigate routes, and speak a dialect. This clearly represents learning and a developed culture. Trying to reintroduce endangered parrots has met with failure. When raised without an adult role model/teacher the young don’t have the social knowledge from their adult counterparts that is required to survive in the wild.

When it comes to mating, birds make choices consistent with natural selection, or survival of the fittest, such as camouflage, or beak size and shape. Essentially this involves having the proper attributes to promote survival in their environmental niche. But there is also sexual selection, or who has the prettiest plumage.

And then there is cultural selection. Bird songs often develop variations between locations. Songs are learned—a cultural consequence. When a bird comes to another area the transient’s song, which may sound very much the same to human ears, is rejected in the new environment. Safina contends that this illustrates a cultural selection process, a discrimination that chooses similarities over differences and defines either attraction or rejection.

This is commonly seen among humans as well. In fact differences are the basis for conflicts, and cultural similarity is conducive to greater harmony. As the world grows smaller and we come in contact more often with other groups, interaction occurs on a scale ranging from conflict to understanding. Most groups retain a specific identity or lifestyle and the wise interloper tries to assimilate, in other words, “when in Rome….”

Cultures are not stagnant, either in animals or humans, and over time adaptations evolve. According to Safina, “Culture answers the question how do we live here?”

So as your children go forth into school this fall you might remind them that they share something in common with the non-human members of the animal kingdom: They have the wondrous ability to learn. And with those learned skills they will later define their place in their world—and yes, how we live here.