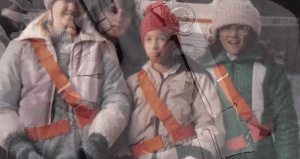 What does women’s equality and empowerment have to do with the American Automobile Association’s (AAA) Safety Patrol, started a century ago as an all-boy program?

In the late 1940s, the AAA opened the program to girls. Since then, for more than 70 years, the Safety Patrol program has been helping elementary and middle school girls make history as leaders-in-training.

Former safety patroller Rochelle D’Agostino Salmon, who safely guided students at Hammonton Elementary School in the 1970s, wrote a story about her experience, titled “Girl in Charge.” She submitted it to AAA, as the organization prepared to celebrate the 100th anniversary of their Safety Patrol program and asked former patrollers across the country to share their stories.

D’Agostino Salmon’s story was selected by AAA Mid-Atlantic to show current and potential patrollers the long-lasting benefits of participating in the program. “Girl in Charge” was highlighted in a press release put out by AAA to its regional divisions and state offices.

In her article, D’Agostino Salmon noted the significance for her—and other young girls—of having the chance to be a safety patroller.

“In the early 1970s, at a time when the women’s rights movement was reaching the national spotlight,” she wrote, “I was already becoming a young woman leader.”

AAA reports that more than 679,000 children nationwide participate in the program in 35,000 U.S. schools. During the last 100 years, excitement for the program has spread around the world. The AAA safety patrol model is active in at least 30 other countries.

Many adults can recall being instructed by safety patrollers in and around their schools. However, what many haven’t considered is that the program is an avenue for students, especially young girls, to learn important lessons that help them navigate the challenges of adulthood.

“I learned to take care of others and to watch the traffic,” says Patti Schmid, head librarian, RCSJ Cumberland Campus, and one-time safety patroller at Field Street Grade School in Penns Grove. “You just don’t walk out into the street without looking.”

“Don’t run in the hallways. Seriously, that’s good advice,” says Michelle McTamney, Rahway resident, inventory/order administrator at Kraftware, and a former safety patroller at Landis Middle School in Vineland. “But also, that … having the responsibility causes people to see you differently.”

“The safety patrol program teaches elementary school girls and boys the life skills of leadership, responsibility and good citizenship,” says D’Agostino Salmon. “Patrollers are proud to lead by example, positively represent their school, work hard to help their younger classmates, and show other students how to be consistent and fair.”

D’Agostino Salmon went on to have a career in Compensation Program Management and Human Resources for both public and private industry, mostly as a consultant based out of a home office so that she could balance being a leader on the job and at home. “Moms are the greatest leaders of all,” she asserts.

In the community, D’Agostino Salmon was one of the two first female coaches of a newly launched Hammonton Little League Girls Softball program as well as a soccer coach. She was president of the Hammonton Stingrays Swim Team and a member on both Hammonton’s Swim Team and Youth Soccer Association boards. She was also a rowing coach for the Philadelphia Girls Rowing Club.

Not every student is eligible to be in the safety patrol. Class clowns, educational slackers, and ne’er-do-wells won’t have the opportunity to don the luminous belt worn by our brave safety patrollers, unless they show that they can excel while handling such an important assignment.

“Being in the Safety Patrol made me feel special because there weren’t too many selected to be in it,” says Schmid. “Also, I liked the responsibility of keeping the younger kids safe.”

For a century, the safety patrol program has produced countless students who have become leaders in many fields. Among them, the girls in charge have sparkled as bright as their polished, silver safety patrol shields, proving first to their school administrators and later to the world that women can break glass ceilings and be effective leaders. n

Since the 1940s, AAA’s Safety Patrol program has encouraged and nurtured the women leaders of today and tomorrow.