Landis bookcases speak volumes about the life of Vineland’s founder. 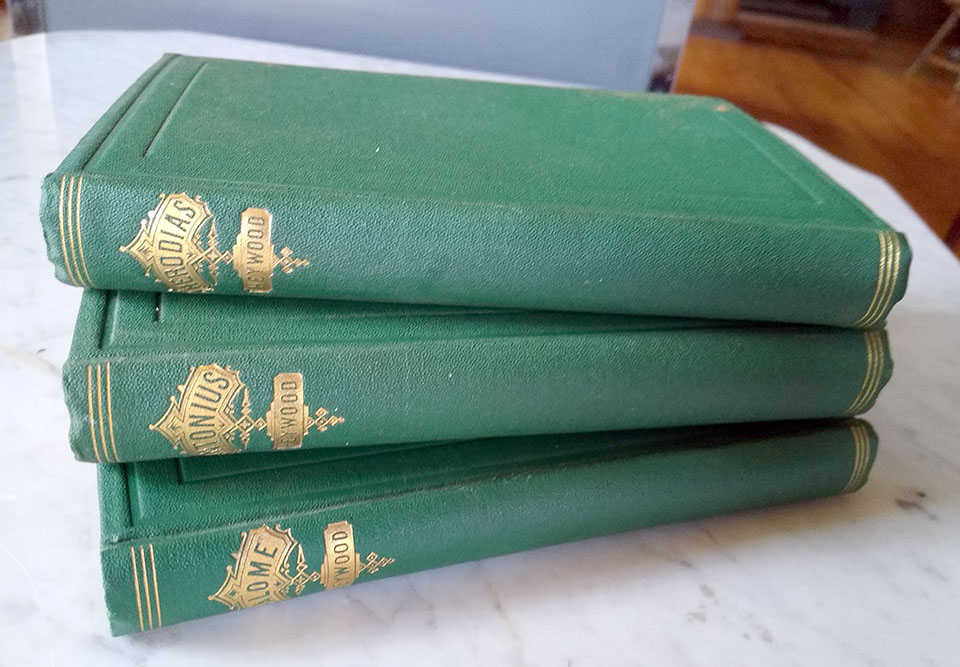 The two large bookcases that house an impressive collection of tomes once owned by Charles K. Landis and his family at the Vineland Historical and Antiquarian Society (VHAS) is beginning to shed additional light on Vineland’s founder, his acquaintances and his reading habits.

VHAS curator Patricia Martinelli, who estimates the bookcases contain several thousand volumes, shared some of the discoveries she made over the past month examining the contents.

One of the bookcases, she reported, contains a book titled A Few Friends and How They Amused Themselves by M.E. Dodge that Robert Dale Owen gave Landis as a gift, inscribing it, “Mr. Charles K. Landis with the compliments and best wishes of Robert Dale Owen December 1868.” The book’s subtitle reveals in more detail the contents of the work: A Tale in Nine Chapters Containing Descriptions of Twenty Pastimes and Games, and a Fancy-Dress Party.

Martinelli points out that since the book was published in Philadelphia by J.B. Lippincott & Co. and sports a publication date of 1869, either Owen had received an advance copy or mistakenly dated it 1868.

Landis picked up a copy of a book titled The Roman Exile by Guglielmo Gajani while in Boston prior to founding Vineland. On the flyleaf, Landis has written, “Chas. K. Landis, Aug. 9, 1856. Whilst stopping with my friend Dr. Chas. T. Jackson, Somerset St. Boston, I met the author of this book, upon several occasions. CKL.” The book, which an Amazon review of a recent reprint called a “picture of the everyday life of a middle-class Roman family during the first half of the nineteenth century,” was originally published in 1856 in Boston by John P. Jewett and Company.

An 1867 three-volume set of books by J.C. Heywood, Herodias, Antonius and Salome, each subtitled A Dramatic Poem, also resides in one of the bookcases. According to The American Catholic Quarterly Review, the books recount, respectively, the events surrounding John the Baptist, “the invasion of Great Britain of Aulus Plautius” and the time “when Jerusalem was taken by the soldiers of Titus.”

Preserved in one of the volumes is a letter to Landis written by the author’s brother. It reads, “Dear Sir: Please accept these volumes with the kindest wishes of the giver. I may sometime have the pleasure of introducing to you my brother, the author. T.L. Heywood January 23d 1868 P.S. The books should be read in the following order: Herodias—Antonius—Salome. T.L.H.” The set was published in New York by Hurd and Houghton.

One of the bookcases houses a photo album of the Landis family containing portraits of Landis and others. According to a list in the album which identifies those preserved in the pictures, several of the photos were taken by Philadelphia photographer John White Hurn, perhaps best known for his portraits of abolitionist Frederick Douglass. In 1859, while working in a telegraph office, Hurn aided Douglass when he delayed sending a dispatch to the Philadelphia sheriff ordering the abolitionist’s arrest based on circumstantial evidence and warning Douglass, who escaped to Canada to avoid what certainly would have been a life-threatening situation. Hurn settled in Vineland with his family around 1880.

Martinelli, who spoke of the “invaluable assistance of Jonathan Choo, Lucy Ogden and Carol Federici” in cataloging the books, summed up the significance of this collection in terms of the Landis legacy: “To me, opening these bookcases has helped us to establish a better understanding of who the individual Landis family members were and learn more about their interpersonal relationships. The bookcases contain volumes given by Charles to his wife, Clara, and to his sons, as well as other books that were given to him by the boys. We’ve also filled in some small details about their lives, such as where they were at specific dates and times. But one of the most significant discoveries is seeing firsthand what a prolific reader Charles Landis was. He apparently enjoyed fiction and poetry as much as non-fiction throughout the entire course of his life.”