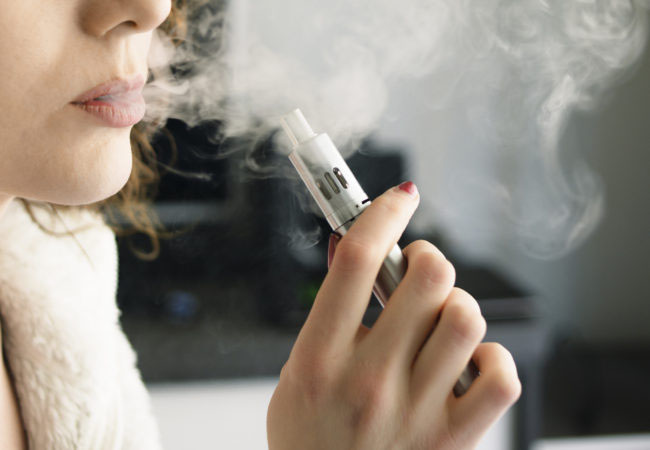 As the vaping-related illness health scare continues to be a fiery topic with citizens across the United States, updated information has been disseminated by federal health officials.

On September 12, the Centers for Disease Control and Prevention (CDC) posted this on their site, cdc.gov: “CDC, the U.S. Food and Drug Administration (FDA), state and local health departments, and other clinical and public health partners are investigating a multistate outbreak of lung disease associated with e-cigarette product (devices, liquids, refill pods, and/or cartridges) use.

The CDC also says, “There are 380 cases of lung illness reported from 36 states and 1 U.S. territory. Six deaths have been reported from 6 states.”

The number of lung illness cases related to vaping has decreased by 70 from the 450 that was previously reported last week.

According to a September 13 article posted in webmd.com by E.J. Mundell, “The decrease is due to the exclusion of ‘possible’ cases … The new case total … includes cases either confirmed or ‘probable.’ ”

States across the U.S. are taking steps to put an end to what some consider an impending epidemic.

According to a nytimes.com article written by Jesse McKinley and Christina Goldbaum published on September 15, “Gov. Andrew M. Cuomo of New York announced on Sunday that he would pursue emergency regulations this week to quickly ban the sale of flavored e-cigarettes.”

On September 4, Michigan Governor Gretchen Whitmer announced her state would ban the sale of flavored e-cigarettes.

On September 12, New Jersey Governor Phil Murphy signed Executive Order No. 84 to establish an Electronic Smoking Device Task Force. According to nj.gov, the goal is to create “a strategy to protect New Jersey residents from the hazards of electronic cigarettes.” (See page 13 for more details; see page 8 for information about New Jersey Attorney General Gurbir S. Grewal’s plans for implementing the task force.)

There is a heated debate taking place across the country—and here in Cumberland County—between those who vape and those who don’t, health officials, owners of vaping businesses, lawmakers, and more.

In the September 11 edition of SNJ Today, we talked to experts who shared their insights about the physical ailments and other complications people experience because of vaping, and more.

In this edition, SNJ Today speaks to Russ Jurczyk, franchise owner, Gorilla Vapes; Nicole Lunsford, owner of Gorilla Vapes of Vineland; a Vapin’ on Safari employee named Oscar; Shaq Johnson, an employee with Gorilla Vapes and Vineland resident, Donna Bermudez, all pro-vapers on the other side of this hot topic.

SNJ Today: Do you vape? If so, how long have you been vaping?

Lunsford: I’m a casual vaper and have been for a while now.

Johnson: Yes, for seven years. I smoked Black & Mild [Cigars] before that.

Jurczyk: I quit smoking on vapor products in 2012 [and] had smoked [traditional cigarettes] for 30 years prior. [I] still continue to use vapor technology.

SNJ Today: How does smoking an e-cigarette or vaping make you feel?

Oscar: Vaping an e-cig makes me feel satisfaction from achieving a brief nicotine high and thus preventing me from smoking cigarettes.

Johnson: It relieves the anxiety I have. That’s the main reason why I started smoking Black & Milds. College was stressful.

Jurczyk: I feel satisfied, enjoy the flavor and have no side effects … my sense of taste has returned along with no smoker’s cough or chest discomfort. SNJ Today: In your opinion, are there any benefits to vaping?

Oscar: Yes, but only as opposed to smoking traditional cigarettes or dipping tobacco. Easier breathing, no physical stench or smell attached to my clothing, no sores on my gum line, no desire to smoke a cigarette, as well as a significantly decreased risk of cancer from carcinogens.

Johnson: From a non job perspective, because one of the FDA rules is we’re not supposed to talk about that with customers, but yes, I 1,000 percent agree [that there are benefits to vaping]. I can run again. I don’t run out of breath the way I used to. I don’t wake up every morning coughing up my lungs … like I was doing with Black & Milds, and like I know a lot of people do with cigarettes.

SNJ Today: In your opinion, is smoking e-cigarettes safer than smoking regular cigarettes? If so, are you aware of any scientific facts to back up your response?

Lunsford: In my opinion, yes. Think of all the chemicals that go into treating tobacco—pesticides, herbicides, fungicides, and who knows what else. Good quality e-juice doesn’t have any of that. I don’t claim to be a scientist, though, and I know there’s a lot of research being done on vaping vs. cigarettes, so I’ll leave the final answer to the experts.

Jurczyk: In England, a country that has embraced using e-cigarettes as a healthier alternative to smoking, has published from The Royal College of Medicine a study that finds vaping is 95 percent less harmful than smoking.

SNJ Today: Do you think e-cigarettes are a good way to quit smoking traditional cigarettes like Marlboros, Newports, etc?

Bermudez: Yes. I smoked Newports since I was 14 until I had a stroke when I was 41. I have never … taken a puff of a cigarette once I started vaping.

Oscar: Yes. I have personally proven in my shop that it can be done even with a 30-year, three-pack-a-day smoker like two of my customers. Vape devices and e-liquid have gotten significantly better over the years to where anyone could quit. Especially with the introduction of nicotine derived from a compound of salt.

Lunsford: I do! We work with a lot of our customers on a step-down process to help wean them off their nicotine addictions. We talk to the customer about how much they’re currently smoking, what their experiences are, when they want to quit by, etc. Then we come up with a plan to gradually reduce their nicotine intake until they’re comfortable quitting altogether. Rather than trying to quit cold turkey, which can be frustrating, stressful, and physically difficult, customers can reduce their nicotine intake gradually, which helps minimize the withdrawal symptoms.

SNJ Today: Six people have recently died from pulmonary complications linked to vaping. Are you concerned that will happen to you or any of your customers?

Johnson: No. My thoughts on it—they’re fake THC carts. You can buy very bad stuff off the street and I feel like that’s where all that’s coming from. They group vaping in with everything else.

SNJ Today: What would you say to a person who never smoked and wants to try vaping?

Lunsford: Be sure to buy your vape products from a reputable dealer. We get customers who’ve bought vapes online from eBay and similar sites because they were cheap, only to find that they’ve bought a counterfeit device, which can be dangerous. At our store, customers can watch us make their e-juice so they can see exactly what’s in it. If you’re buying online, you don’t know what they’ve put in that bottle of e-liquid.

Oscar: Don’t start. Plain and simple. This is not a fad, a trend, or something to be romanticized by youth. It is a means of smoke cessation and nothing more. The vast majority of enticing flavors are meant to pull adults away from the deadly grip of traditional cigarettes. So, if you don’t do either habit, don’t start either habit.