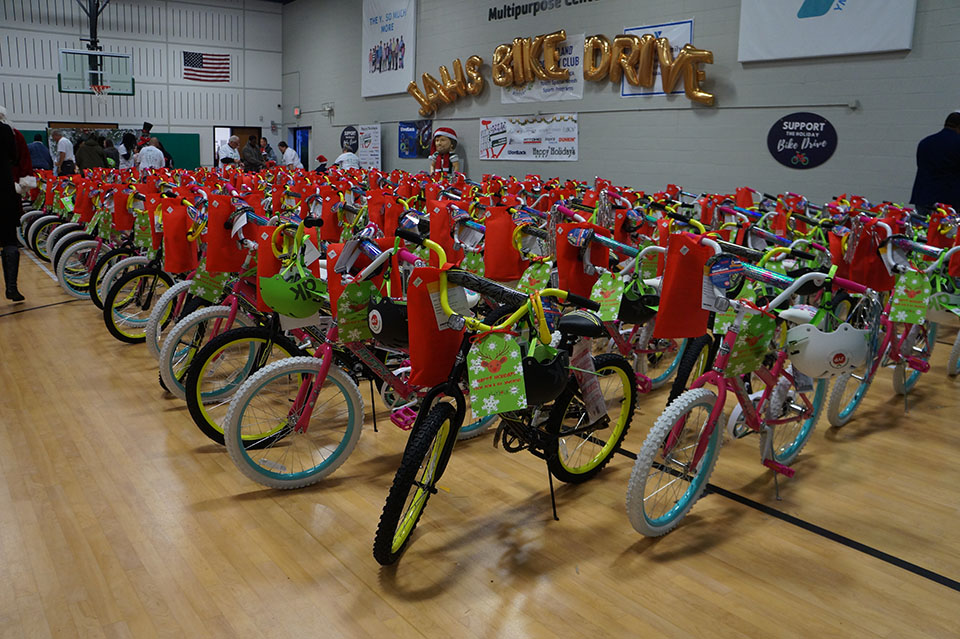 Christmastime has historically been used by many as an opportunity for thinking not of one’s self, but of others—especially of those in need. On December 5 and 6, more than 100 volunteers gathered at the YMCA of Cumberland County in Vineland, to assemble and distribute bicycles to local at-risk youths during Ron Jaworksi’s 2nd Annual Jaws Bike Drive. Jaworski, the highly respected former Philadelphia Eagles quarterback and ESPN NFL analyst held this heartwarming event in conjunction with his Jaws Youth Playbook (JYP) foundation.

“It’s a very special program,” said Jaworski, affectionately known as Jaws. “I and my family and the Jaws Youth Playbook … get tremendous satisfaction out of doing this. We all feel … really good about what we’re doing for these kids because the kids that are getting these bikes normally could not afford them.” On December 5, the bikes were put together by volunteers who have a personal connection to Jaworski and the community.

“I’m really good friends with Ron Jaworski … and we really love the fact that Ron does what he does for a lot of different communities,” said Robert Penza, CEO of Glasstown Productions and owner of Samuel Coraluzzo, Co., Inc. and Torrissi Transport, LLC.

“At this stage of my life and with the companies I own “giving back to our community is really what it’s all about,” said Penza, whose companies donated 40 bikes to this wonderful cause.

“My wife Diane and I have known Jaws and Liz (Jaworski’s wife) for 30 years,” said John Mazzei, former superintendent of schools in Salem County, among many other positions throughout his lifetime. “And my wife is on the board of directors of his foundation. “Last year, I worked in Camden to give the bikes away. This year I volunteered to put them together and give them away. I’m looking forward to both days.”

Sandy Fasold and Ana Saull, who both work for Inspira Health Foundation, a sponsor of the event, were also on hand to donate their time.

When asked how the children would react when they received their new bikes, there were a several teary-eyed responses given by volunteers.

“I imagine it’ll be like Christmas morning for them,” Fasold, director of operations for the Inspira Health Foundation, said. “These kids don’t always have the benefit of a beautiful Christmas morning and this will be a wonderful gift for them.” “I definitely believe this will be a memory they will not forget,” Saul, giving coordinator for the Foundation, said. “When they’re older, they’re going to think back and say ‘I remember when I got a bike, I was so excited [and] I was so happy.’ ”

“First of all, we all can remember when we got our first bike,” said Moloney. “I think it’s a milestone in a kid’s life to get their first bike. It’s something that always sticks in your mind.And kids look at them, not as utilitarian, but as prized possessions.”

The volunteers’ predictions on how the children would respond were prescient as they arrived at the YMCA on December 6 to receive their “prized possessions.”

Jazimean Boardley, of Bridgeton, was speechless when she received her bike but joyously responded with a thumbs-up. Her father, Mark “Wolf” Boardley, also of Bridgeton, gladly became her spokesperson.

“This is nice, because she always wanted to ride a bike,” Wolf explained. “I’m going to put training wheels on it so I can teach her.”

“When I get big I can ride my bike,” said Khendell Aviles, who was doubly excited because he will also be celebrating his birthday this week. His mother, Hannash Ortiz, who is from Puerto Rico, was ecstatic when she found out Aviles was selected to receive the free gift and noted that events like this do not occur in her native land.

As for Jaworski, he sees this program as a way of helping these youths on multiple levels: “It’s going to give them freedom to ride around the neighborhood. It’s going to give them exercise, which is what the Jaws Youth Playbook is [about]—to develop healthy young people so they can have great success in the future. “It’s really special and heartwarming to see the smiles on these kids faces and that’s why we have more people every year volunteering to do it.”

For more information about JYP, go to jawsyouthplaybook.org.