How the Jersey Devil haunts even today. 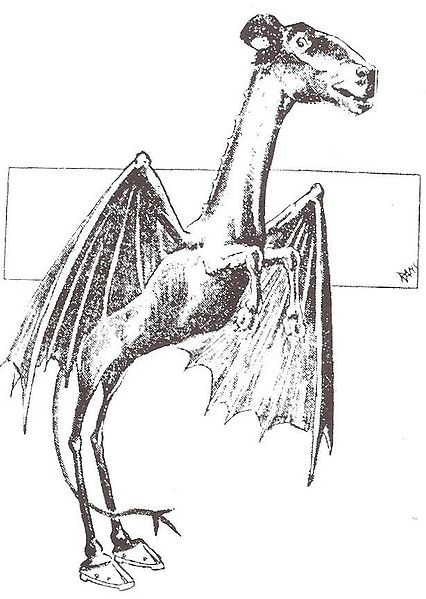 It was a cool day in late October when I led a reconnaissance expedition of sorts to the Edwin B. Forsythe National Wildlife Refuge in Oceanville, NJ. This was in anticipation of taking a larger group there for a caravan along the impoundments bordering the preserve’s Wildlife Drive.

As part of our exploration we walked a trail along Reeds Bay off Somers Cove. The skies were sunny and the day only slightly nippy—not cold, especially in the sun. We weren’t far from the visitor’s center but that didn’t seem to affect the turn of events.

We had a small group of naturalists, all specializing in different areas—plants, birds, cultural resources, and insects. From the boardwalk along the bay we saw herons, a few early ducks, a kingfisher, late migrating butterflies, and the like. The crisp air allowed us to smell the scents of autumn. Each of us told stories of the things we saw. Sally explained the high wing position of northern harriers and how the disks of their eyes help to funnel sounds of small rodents to their ears as they hunt, soaring above the marsh. Another participant talked about the blackgum being one of the first trees to change to fall colors. The sounds of dabbling ducks brought some smiles to our faces. Our amateur botanists explained how Usnea, or old man’s beard (a tree lichen), is used as a tincture to boost immune response.

My contributions often address cultural history, and being only a couple of miles from Leeds Point I thought it appropriate to talk about “Mother Leeds” and her purported 13th child, and how the story of the Jersey Devil evolved. Kean University professor Brian Regal’s studies suggest that the legend sprang from a business rivalry between Titan Leeds and Benjamin Franklin c. 1730s. In 1716 Titan inherited his father’s almanac business, which was a competitor of Franklin’s Poor Richard’s Almanac. Leeds was a loyalist and endorsed by Edward Hyde, Lord Cornbury of the British Crown, who was one of the most vilified governors of Colonial America. Titan’s father, Daniel, was maligned by fellow Quakers for mystical and astrological references in An Almanack, and thus he was deemed a pagan. The Quaker Burlington Meeting, with its anti-crown sentiments and disdain for Leeds’ writings, declared him “evil.” Titan nonetheless continued in the same vein as his father, increasing his embrace of occultism, mysticism, and demonology. Shortly after Leeds’ takeover of the paper Franklin, as a political joke, predicted Titan’s death in Poor Richard’s. Titan was offended and fired back in his writings. Franklin stirred the pot, further referring to Leeds as a ghost.

Titan Leeds’ actual death was in the mid-1730s. and coincides with the time period associated with the birth of the Jersey Devil. In this pro-monarchy and pre-revolutionary climate, Regal hypothesizes that the legend of the “Leeds Devil” got its roots. The family crest and masthead of Titan’s New Almanack was a wyvern, or two-headed winged dragon with a barbed tail, not unlike descriptions of the infamous Jersey Devil. Daniel Leeds was a surveyor general and also held title to land in Egg Harbor close to what is now the Forsythe National Wildlife Refuge. This property was given to his sons and became known as Leeds Point, ultimately deemed the birth place of the Jersey Devil. Early mentions of the “Leeds Devil” appeared in the 1859 Atlantic Monthly.

Another of Daniel’s sons was Japhet Leeds of Leeds Point, whose wife was called Deborah. In his 1736 will Japhet named 12 children. If you recall, the legend suggests that the 13th child of Mrs. Leeds (probably Deborah) was cursed by his mother’s declaration that “I would just as soon have a devil than another child.” Almost immediately upon birth the child transformed into a monster, or Leeds’ Devil, and flew up the chimney. Over time the name transformed as well to the Jersey Devil. Evidently devils are cut out of any inheritance, possibly a motivation for ghostly revenge.

More than 100 years later historian William Leap, a weekend resident on the Maurice River, fascinated CU Maurice River members with his famed presentation on the Jersey Devil. Apparently in 1909 there were a flurry of sightings of the “Jersey Devil.” These reports were numerous and seemed to be due to a sort of mass hysteria. Leap said that newspapers were rife with unreliable accounts and that the media were often a source of entertainment and intrigue. One might even call it “fake news.”

At this point in my account our botanist, Emily, had fallen behind, as is often the case with botanists since plants stay put for intensive inspection, unlike the creatures we can often observe only briefly. When we returned to the parking lot and were satisfied with our many sightings, we realized that we were missing Emily. I volunteered, “I’ll go back and hunt her up; she’s likely caught up in using her binoculars as a jeweler’s loop on some manner of minutia. You’ve gotta love her!”

As I reentered the woods, the sky seemed to be taking a turn for the worse. In fact, black clouds were coming from the west, as they often do in southern New Jersey. An already shaded forest was growing darker. And then I heard it…a primal scream, not human. The hairs on my neck prickled and the sweat on my arms felt clammy. Likely just a fox. Where’s Emily? We need to get back to the car before this storm hits, I thought. Then, in the brambles on my right, I heard a rustle in the recently fallen leaves. A clomp of hooves briefly sounded on a hard surface. Just a deer, I reassured myself. I hurried along, concerned about the impending storm. Behind me it seemed as though I were being followed by the sounds of steps keeping pace with my own. I stopped; they stopped. Have to quit watching scary movies, I told myself. “EMILY,” I shouted; nothing. Again steps. I turned and seemed to see what appeared to be two bright red eyes in the darkness of the brush. I rubbed my eyes and nothing was there. Curses, Emily, do you have to notice all manner of forbs? Although in fact it is just what I like most about her.

Finally, there on the trail I saw Emily kneeling with her journal over some wee herb and she began to relay the medical properties and remedies to me. I exclaimed, “Good God, woman, look up! The sky is about to open up!” Because she is one of my confidantes, I shared my experience. She too had heard the fox’s cry and she scolded me: “Gracious, Jane, you’ve got to stop relaying the lore of the Pines.” We hurried back to the parking area and I pointed out where my imagination ran way with me. Then there was another scream and a crashing in the woods. We quickened our pace and giggled like two school girls.

The names of participants have been changed to protect their anonymity. In fact, any resemblance to fact is pure fiction. 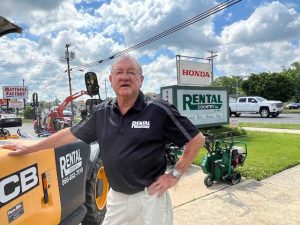 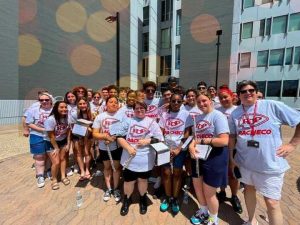