Cumberland Grads Prove They Have the ‘Write’ Stuff 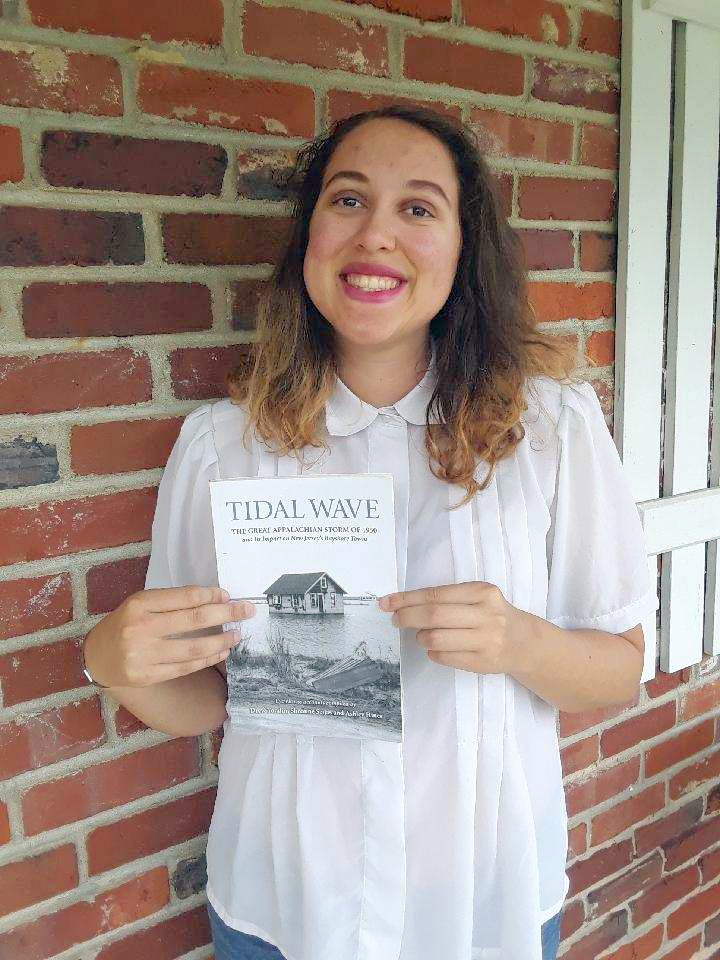 Shoanne Seijas, of Millville, shows off the new book she co-authored with Drew Tomlin and Ashley Hines for the Bayshore Center at Bivalve.

Nearly seven decades have passed since the Great Appalachian Storm of 1950 shook the eastern third of the United States. The coastal communities along New Jersey’s Delaware Bay shoreline fell victim to hurricane-force winds, heavy rains and a devastating tidal surge. The storm, identified as an extratropical cyclone, destroyed homes, swept away boats and vehicles, displaced approximately 2,500 Cumberland County residents and claimed the lives of 15—including five children.

Leesburg resident Drew Tomlin, a longtime docent with the Bayshore Center at Bivalve (BCB), realized the story was one that needed to be told.

“I wanted to gather first-hand accounts while people who experienced it were still around,” he says.

In 2016, Tomlin began collecting photographs and interviewing survivors of the tragedy. When Shoanne Seijas and Ashley Hines, both graduates of Cumberland County College, began working as seasonal interns at the Bayshore Center, they enthusiastically joined Tomlin in the endeavor.

The result is the newly published 100-page oral history, Tidal Wave: The Great Appalachian Storm of 1950 and Its Impact on New Jersey’s Bayshore Towns. The book is described as “a cautionary tale concerning disaster preparedness, poor housing practices and environmental injustice.”

“The project started three years ago, but the bulk of the work was accomplished in a year due to the dedication of Drew, Shoanne and Ashley, and volunteer editors and contributors,” explains Rachel Dolhanczyk, the Bayshore Center’s museum curator. “The book speaks to BCB’s mission to advance the understanding of the human impact on New Jersey’s aquatic environment, and preserves a locally known story that had long-lasting implications and has relevancy to other communities.”

Seijas, who recently earned a joint bachelor’s degree in anthropology and sociology from Stockton University, found it challenging to write chapters for the book while a full-time college student. But the experience taught her a great deal about writing and publishing.

“This was my first time doing something like this. I had never transcribed an interview before,” she says. “It took me weeks to get through one interview and then turn it into a chapter. I wanted everything to be perfect. Writing some of the chapters for this book taught me that I should focus on writing everything out first and then [edit] it a few times. Almost no one gets it perfect the first time they write.”

The project was well under way when Hines, who was studying engineering and chemistry at Cumberland at the time, joined the BCB team. Her contributions helped propel the book to completion.

“Interviewing people was my favorite part of writing the book,” Hines says. “Everyone has a unique story to share, so learning how to ask the right questions and turn it into something significant had a big impact on me.

“There has been a lot of small-town pride associated with this book. Many of the communities we wrote about have only a couple thousand people in them, so the people we wrote about are familiar faces.”

“So far the reactions to Tidal Wave have been overwhelmingly positive,” says Seijas. “Many people found themselves connecting to the story in so many wonderful ways.”

“One thing about working with the Bayshore Center… when you have an idea, you are told to run with it,” Tomlin says. “I’m grateful for the help and support I got with the project. It’s not a ‘me’ book, this is ‘our’ book.”

Tidal Wave: The Great Appalachian Storm of 1950 and Its Impact on New Jersey’s Bayshore Towns is available at the Bayshore Center at Bivalve, and on amazon.com