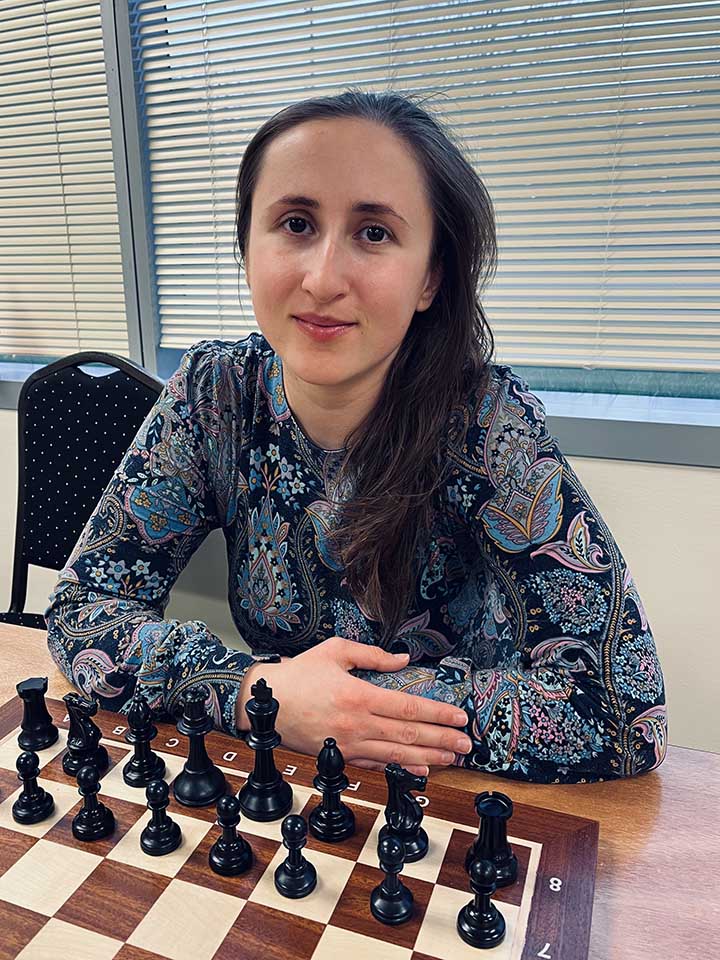 For Kameliia Sharuda, a Rowan College of South Jersey (RCSJ) ducation major who graduated on Friday, May 13 with a 4.0 GPA, it’s always been important to finish strong. The 2021 U.S. Open Women’s Chess Champion is very familiar with the similarities between chess and life—and being both student and teacher.

Last year, she defeated Matthew O’Brien, a U.S. Chess Master, in the final round, to become the highest-placing woman in the chess championship. American Chess Magazine published an article about her accomplishments.

Sharuda began playing the game of chess in her homeland of Ukraine, at the age of four.

“I was playing too many card games and my parents got tired of it,” she recalled. “So, my mom suggested to to my dad to teach me some chess.” Her father taught her the game and she won a “bronze medal in a Ukrainian National Girls under-10” tournament.

In 2013, the champion chess player came to the United States via a student exchange program and decided to stay after meeting the man who would later become her husband. Sharuda (who attended the same high school as Ukrainian President Volodymyr Zelenskyy) returned to Europe in March to help her parents escape the war-torn country and settle in Poland. She recently shared her family’s tense journey on RCSJ Today.

The respect Sharuda, a teacher’s aide at Sewell Elementary School and chess instructor at the South Jersey Innovation Center, has for the game runs deep.

“It’s a love/hate relationship. It can be very cruel,” she said. “You can spend the whole game playing good moves, but one mistake, one small little mistake …,” she said. “Let’s say you get anxious or you’re tired of thinking or you were lazy for a second, right? You didn’t feel like calculating and there comes your mistake and all that good play you did, is out the window.”

Sharuda, the mother of a seven-year-old son who also plays chess, is intrigued by the psychological and philosophical aspects of the game. She points out the parallels between chess and life.

“Of course, I love the game. I just find it fascinating. What I like about it is that it teaches you to analyze,” she said. “The best way to learn is learned from the games that you lost. So, I feel like it relates to life a lot. We all make mistakes, right? What separates good players… [is they] are able to learn from their mistakes. If you cannot learn from your mistakes if you’re not trying to improve, it’s probably not a good thing in chess, and in life, as well.”

Sharuda also sees a connection between the game and being a college student: “One of the chess players said the hardest thing is to win a winning game, so I feel like we tend to relax in some cases. When we feel like the victory is close, we imagine we’re already celebrating [with] champagne in our hands. But that’s actually the time to be even more cautious. I feel like in school it’s also important to finish strong. So, no matter how well you’re doing you can’t just relax. It’s important to finish strong with whatever you’re doing.”

Sharuda has family ties to the college, which made it an easy decision to enroll here. “My husband went to Rowan College of Gloucester County (now RCSJ) and my brother-in-law goes to RCSJ, as well. I live in the neighborhood. RCSJ has a good reputation so there’s no reason to not take advantage of something that is right around the corner.”

A participant in RCSJ’s 3+1 premier partnership program with Rowan University, Sharuda has excelled in her courses. “It’s a great program,” she declared. “It’s affordable, which is important. The dean has been extremely helpful. All the teachers are amazing.”

Her professors feel the same about her.

“Kam has always found ways to get her peers involved in conversations at a deeper level,” said Dana Teague, instructor for Education majors in the 3+1 program. “She is always willing to ask all kinds of questions and to provide support to her peers when needed.”

“She has a very strong desire to teach, and I believe that she will make a strong, effective teacher because she has a great deal of empathy,” said Instructor Jennie Cusick. “She also knows and understands how to communicate well with others.”

Sharuda has travelled to numerous tournaments throughout the East Coast and admitted that playing chess, for her, is a time-consuming hobby. However, Sharuda, who hopes to achieve the title Chess Master, made sure that her studies didn’t falter, even during the U.S. Open Chess Championship.

When asked how she felt after becoming the top woman finisher in the event, Sharuda said, “Of course, I felt proud of myself because if you look at the list of players, there were a lot of strong players including some grandmasters.”

She was quick to add, “I was so proud of my son who played as well. He and I won the mother and son prize.”

Currently in the Top 100 Rankings for women chess players in the U.S., Sharuda said “It’s important to enjoy what you do and try to have fun. I try to teach my son to just have a fun experience and not just play chess for the results. I think that’s the most important thing. When you start something, you don’t always win…. I think it’s important to be patient and try to improve from that result when you lose.”

She quoted Winston Churchill to drive her point home: “ ‘It is the courage to continue that counts.’ I can’t say it any better,” said Sharuda.