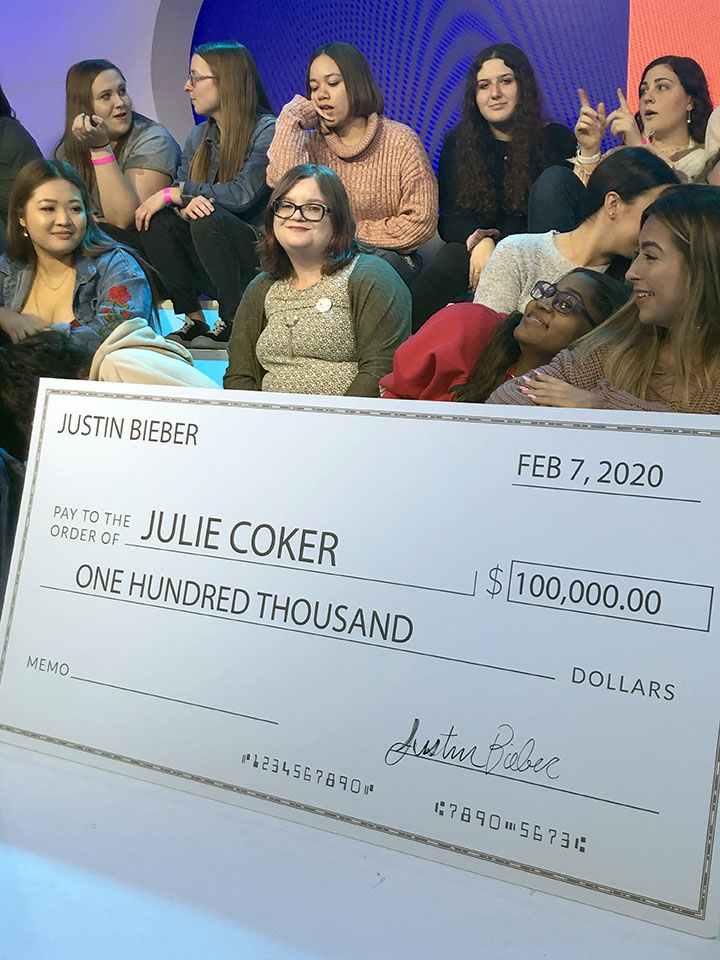 Stockton University senior Julie Coker of Union Beach in Monmouth County has the best autograph from Justin Bieber—his signature on the bottom of a giant $100,000 check—which he presented to her live on MTV on February 7 to honor her work on mental health awareness with Active Minds.

“I’m still in shock,” Coker said later on campus as she prepared to staff the Active Minds table in front of the Stockton library. “The check is in my room at home, but I still feel like it almost didn’t happen.”

Bieber was interested in helping someone involved with mental health. He and his team chose Coker for her work with Active Minds, a nonprofit supporting mental health awareness and education to young adults. Coker is president of the Stockton chapter and also serves on the national Active Minds Student Advisory Committee.

“They just told me to be there and it would change my life,” she said. “I didn’t even know that (Bieber) would be there.”

While Coker is in shock, the award is no surprise to those who know her and have worked with her on the multitude of Active Minds events held all year at Stockton.

“Julie is one of the all-time great Stockton students,” said Assistant Director of Counseling Services Nathan Morell, the advisor for Active Minds. “She really hit the ground running and by her second year here was president of Active Minds. She works tirelessly year-round, even during the summer.” Morell said under Coker’s leadership, Active Minds at Stockton has grown “by leaps and bounds” to host some 50 events each year, including some that bring in national speakers. Coker also participated in the Stockton University Resiliency Project, telling her story on video to share with the Stockton community and help break the silence and reduce the stigma surrounding mental health issues.

“She is innovative, creative,” Morell said. “Now she can go on, get her master’s degree, and help save the world.”

Coker, who has battled depression and anxiety, said the help she got from counselors at Red Bank Regional High School after her family lost their home in Hurricane Sandy made her want to get involved in helping others.

She is also a Justin Bieber fan. Her very first concert, at age 13, was Justin Bieber. She also met with Bieber and his wife, Hailey Baldwin, backstage, and his manager said Coker will also get tickets to one of his upcoming concerts.

Coker will graduate in May with a social work degree, and, using some of the funds from the Bieber gift, plans to attend graduate school for social work.

“You don’t go into social work for the money but for the deep desire to help people,” Coker said. “So this life-changing gift will help me start my career on the strongest financial footing possible and will enable me to help even more people. I’m so grateful to Justin Bieber for helping me forward on that path.”

“Julie is an amazing representation of the powerful young adults who are the driving force behind Active Minds, and who are leading the way in changing the national conversation around mental health,” said Alison Malmon, Founder and Executive Director of Active Minds, in the press release announcing the award.

Coker said Active Minds helped her learn about mental health, and about leadership.

“Active Minds gave me the opportunity to educate other people, which is something I really love to do,” Coker said.